So19 talks with CHARLES FINCH 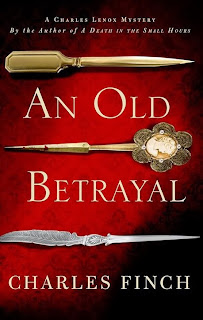 Charles Finch’s eight Charles Lenox mysteries combine strong storytelling, inventive puzzles, a distinctive voice, and an engaging glimpse of an at the height of both its powers and its contrasts. The author’s love of British literature and history can be felt throughout the series, as can his commitment to wide-ranging and scrupulous research. So19 was delighted to talk to Finch about the latest Lenox book, An Old Betrayal (Minotaur Books, November 2013), which features no less august a personage than the Queen. Finch’s first literary novel, The Last Enchantments, appears in February 2014; his Tumblr gives myriad fascinating glimpses of that novel and its world. You can also catch up with the author on Facebook, where he maintains a lively presence. <


SO19: Your editor, Charles Spicer, says that you write "a novel of manners," and I think that's true. Could you talk a bit about how and why you chose to write these novels in mystery form?

CF: It's an interesting question! I think there was never a society more in love with its own manners and codes than Victorian London, and one of the fascinations of the crime of the period is that it ruptures that very formal set of behaviors. I wanted to write about a detective who belonged to a world of great external placidity but saw the breaks in that surface. If the novels didn't have an element of crime, they might get a little bit stilted, I fear, or aimless. And then, it's always fun to have a mystery.
SO19: A charming paragraph in the book makes reference to the modernity of the 1870s and the rapid approach of the year 1900. How and why did you choose to write about the 19th century generally, and Lenox’s particular moment in it specifically?


CF: I've always loved the fiction of the 19th century, and its atmosphere was what really inspired me to write the books I do—writers like George Eliot, Charles Dickens, Arthur Conan Doyle, Elizabeth Gaskell…I could go on. As for the specific span of the series, from 1865 to 1876 (so far), I think that was around the time when the last barbarism of the previous century, the public hangings, the hideous poverty, was finally really shed. You had money coming in from the north and the empire, the great Parliamentary battles. It's the heart of the Victorian period to me...


SO19: As its story demonstrates, this book takes place just as private detection is becoming a profession. Could you talk about that a bit—why you think it happened, perhaps, or any other thoughts on it?


CF: I think the story of the whole 19th century is of a society trying to bring order to the wildness of the world. Scotland Yard was started, the dark continents were colonized. But the wildness kept pushing through anyway—the great Victorian power structures couldn't smother crime entirely. I think that's why the era gave rise to the private detective, a sort of comforting freelance figure battling against dark forces. It's interesting that so many of the detectives are very logical and scientific too. It was a positivist age. They were convinced they were moving toward a utopia. They had no idea how complicated the 20th century would be.


SO19: Lenox is a privileged man, and in that sense offers contemporary readers the kind of fantasy for which many of us turn to historical fiction. Yet his sense of obligation to his community—or, more accurately perhaps, communities—resonates in all of the series’ books. Why did you make this choice? How does it shape the themes and storylines of the books?


CF: To be perfectly honest, I've been relatively (not crazily) privileged in my life, and I've always felt some sense of responsibility from that. I think this is one of those times when there was something unconscious at work.


SO19: Identity theft, assassination, class bias, political incompetence and corruption: many of the book’s elements are part of our lives today. Do you look consciously for themes that have contemporary resonance?


CF: I get asked this often, and the answer is that I don't! I try to write as truly to the history of the period as I can, without worrying about our own world. I think it's a testament to the Victorian period that the resonances are there nevertheless. It was the first society that really looked like ours, an emerging middle class, men going to work each morning, dinner parties, education, and so I think we see ourselves in it—the moment of human history when we can really begin to recognize ourselves.


SO19: The novel involves a number of rather complex and arcane subjects, and touches briefly on still more unexpected details of the period. The practices of the House of Commons, the etiquette of the Palace, the workings of the Victorian railway network…how do you research these complicated systems such that they are referenced so accurately in your novels?


CF: Thank you very much! I like to find little pockets of interest within the daily life of Victorian London and research the hell out of them. In A Burial at Sea it was the navy, in another book it was counterfeiters. In this one it was the Palace and the railways. I just read every word I could find on them. I like it much better when a writer's knowledge seeps into the work than when he or she presents a big chunk of information, but that requires knowing a lot more than you're going to use.


SO19: The Queen is vividly if briefly portrayed in this book, as is the life of the Palace and staff around her. What inspired this storyline? What surprised you most about her and her world?


CF: I've always been scared of incorporating historical figures, because the voice is hard to get right—and this was the ultimate historical figure. I was just so fascinated by what I read of her that I had to try it. I tried to make her voice sharp and clever, as it was in real life apparently. I also hoped to hint at the bizarrely consuming grief she felt over the death of , which, to answer your question, was what surprised me most—how completely it darkened the remainder of her life, took the joy for her even out of her children.


SO19: You’re clearly an avid reader. What authors or texts do you feel most shape your own writing about the 19th century?


CF: There are many, many! It's mostly fiction, actually, because I find the most important thing for me is getting the shape of the world right. That's more important than facts or history—just the texture, the voices, the dialogue, the street life, the manners. The writers I mentioned earlier help with that, and also Wilkie Collins, Benjamin Disraeli, H.G. Wells, George Gissing, Anthony Trollope—he provides a lot of the atmosphere for my books. Then, I do also read non-fiction. I like to dip into biographies of the political figures of the age.


SO19: An Old Betrayal and The Last Enchantments, your literary novel appearing in January, both take place in , but in very different time periods. How do you feel the books are similar, and different?


CF: I love writing mysteries, but a huge part of my mental life as a reader is outside of genre fiction, in literary fiction. The Last Enchantments, which we hope is a sort of contemporary Brideshead Revisited, is a book I've worked on for several years, and it's different in almost every respect from the mystery novels. For all that, as you point out, they're both set in . I think I loved English books so much my whole life that I've been drawn to it again and again. It might finally be time to write something set in .


SO19: Are you planning on continuing the Lenox series? If so, any hints about the next installment?


CF: There are more Lenox books to come, yes! I will say that in the next one his career goes in a radically new direction. I hope that'll be exciting for readers. There's always the chance of alienating people who like the characters to stay exactly where they are. <
Email ThisBlogThis!Share to TwitterShare to FacebookShare to Pinterest
Newer Post Older Post Home