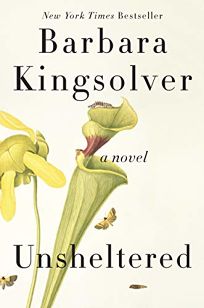 Anyone feeling like her life—and the world—are falling apart (and who, right now, isn't?) will resonate with Barbara Kingsolver's Unsheltered, which I reviewed for Publishers Weekly last year. Its two intertwined narratives are set in Vineland, a real New Jersey town built as a utopian community in the 1860s. In the present-day story, the magazine Willa Knox edited and the college at which her husband taught both close at the same time; as though that's not enough strain, they're caring for Iano's elderly father, their single new infant, and a house that is literally collapsing around them. Destitute after decades of striving and stunned by a racist presidential candidate they feel bewildered by the collapse of the American dream.  In the nineteenth-century narrative, science teacher Thatcher Greenwood and naturalist Mary Treat (a historical figure) live in Vineland in the 1870s. Thatcher's house too is unsound, and the radical (and Darwinian) new ideas the pair champion engender fierce resistance in the community. In addition to the absorbing and artfully intertwined narratives themselves, I loved the exploration of what we lose—and what we gain—during times that shake the shelter of familiar beliefs. You can read my review here.