Suz on Publishers Weekly: Kate Saunders' THE CASE OF THE WANDERING SCHOLAR 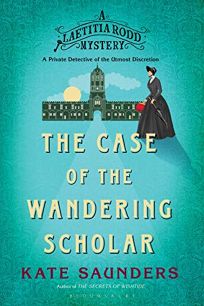 With my post-rotator cuff injury shoulder issues gradually resolving themselves, I'm catching up on sharing some of my favorite books of the past year or so. Among that group,  I loved the second Letitia Rodd novel from British author Kate Sanders, which I reviewed for Publishers Weekly late last year. Rodd is an indefatigable clergyman's widow who acts as a discreet investigator—often on puzzles referred to her by her barrister brother—to supplement her modest income. This time around, she starts out attempting to deliver a letter from wealthy Jacob Welland to his estranged brother Joshua. The wandering scholar of the title, Joshua has been living on the land around Oxford University since a breakdown ended his studies there. Rodd stays with clergyman Arthur Somers and his wife Rachel while she attempts to locate Joshua. When Arthur Somers is murdered, Mrs. Rodd steps in to attempt to save the accused murderers, Rachel and the parish curate, the charismatic Henry Barton, from the gallows.

The shrewd and energetic Mrs. Rodd is an appealing protagonist, an insightful guide to Victorian mores, and a woman whose journey of midlife reinvention will resonate for many contemporary readers. Sanders skillfully echoes the rhythms of Victorian prose without ever falling into pastiche, and her exploration of the nuances of Victorian religious belief (Arthur Somers practices a wonderfully peculiar and peculiarly Victorian High-Churchiness) is unusually rich and nuanced for a series mystery. You can read my review of the book in Publishers Weekly here and buy a copy on Amazon or at your local indie bookstore.