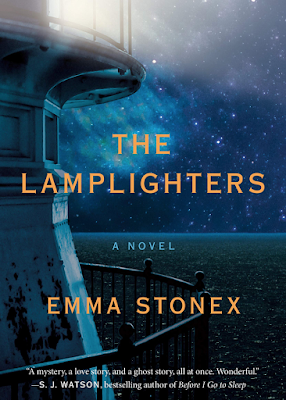 Most of my reading year-to-date has been quite distant from the 19th century, though it's included some splendid books. An early favorite was Emma Stonex's The Lamplighters, an extraordinarily rich and atmospheric debut novel that is at once a locked-room mystery, a ghost story, a historical novel and a family and relationship drama. The story was loosely inspired by the never-explained disappearance of three lighthouse keepers in 1900 Scotland. Stonex's novel shifts the location to Britain's southern coast and the timeframe to the second half of the 20th century: in her narrative, the vanishing takes place in the 1970s and the "case" is explored again in the 1990s.  I'll save my full review for next month, since the book doesn't appear in either the UK or the US until March 4, but I urge you to put it on your reading list now!

It's always fascinating to see the differences in cover treatments on the different sides of the proverbial pond. The image around which this text wraps is the cover of the American edition, from Viking. It's very attractive, and also true to both Stonex's description of the lighthouse and to the sense of unspoken isolation that pervades the story. Yet it feels quite a bit more conventional than the novel itself, which mixes genres and plays with the ineffable quite fearlessly. And it also feels rather close in mood and color scheme to the cover of M.L. Steadman's The Light Between Oceans.

The cover art for the British (Picador) edition, depicted below, is more interesting. I can easily imagine it being less appealing to readers, yet I very much like its boldness and the indirect suggestion of both mystery and the 1970s in the marbled-paper effect. (Admittedly, you may not get that same 70s vibe if you weren't as saturated in rock-concert light shows and tie-dyed everything as I was during that decade.) In any case, an intriguing contrast in mood and strategy. 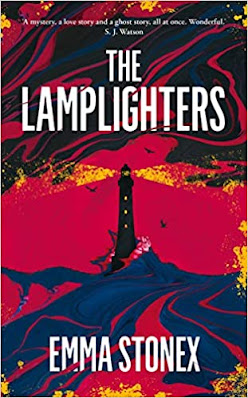