THE SOCIETY INTERVIEWS: Gene Lee on MEN WITHOUT HATE 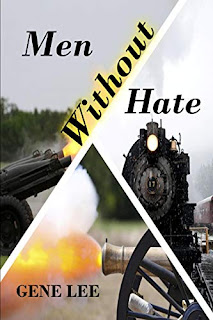 I’m pleased to have had the chance to interview Gene Lee about Men Without Hate, a novel whose first section is vividly set during the Civil War and its aftermath. I first met Gene through classes and literary events in my former home town of Vero Beach, Florida, and have followed his writing with interest ever since. Gene is a Florida native with a rich personal experience of the state’s varied settings. Inspired by his reading of Hemingway and Joyce, he began writing stories as a young man and later became a presence on the South Florida poetry scene. He began writing what turned out to be a trilogy of novels in 2004; Men Without Hate appeared from All Things That Matter Press in 2016 and its successor, Raines in the Day, was published by the same press in early 2021. You can find out more about Gene and his writing by visiting his author website. It’s a pleasure to offer this chat with Gene on Men Without Hate, its connections to 19th-century experience, and his other work.
Q. The novel depicts two different but related characters facing two very different wars: Lewis Raines fights in the Civil War, Hilton Raines in World War II. Beyond the fact that they are two iconic American wars and therefore reflect fascinating aspects of American history and character, why did you choose to juxtapose those different conflicts?

It’s my feeling that those two wars represent the defining aspects of what this country, and the people living here, evolved into, both before and after. I felt that by representing the changes in the American psyche through two young men who found themselves fighting in those wars, I could tell a good story and illustrate both the positive and negative that impacted their lives.
Q. The protagonist of the first section, Lewis Raines, is part of the Civil War action we now know as Pickett’s Charge, which took place on the final day of the Battle of Gettysburg. For the readers, including myself, who are only familiar with Civil War battles in the vaguest sense, could you talk about why you chose that particular episode?

My character Lewis joined the Confederate army because his Uncle Dawes thought it would be a grand adventure, and if it was good enough for Dawes, then it was certainly good enough for Lewis. Since Lewis had no real “dog in the fight” as far as slavery and Southern independence were concerned, I was able to show how he evolved into a grown man, torn and shaped by what he went through during the four years of conflict.

Q. There is obviously a lot of documentation, both from the period and after it, about the military aspects of the Civil War. What sources did you find the most helpful in terms of factual information? Which ones, of those or beyond them, did you find most inspiring, interesting, or powerful more generally?

I first read Killer Angels by Michael Shaara in 1975, not long after visiting the national park at Gettysburg. Over the years following I read quite a bit about the Civil War, but Shelby Foote’s multi-volume The Civil War, a Narrative, by far was the most informative and inspiring work I read. Having said that, Killer Angels is my still favorite.

Q. As historical fiction writers, we always have to particularize what we learn from broader histories. How a given man felt and moved, what specifically he saw from his particular physical and mental vantage point, what scared or didn’t scare him, what bigger-picture information he entirely or partially lacked, and of course whether and how he survived: none of this is the same from one man to another even when the men fighting an action are ostensibly working seamlessly as a unit.

Indeed. Over the years I read a lot of memoirs, letters, and first person accounts written by men who had fought in both the Civil and Second World Wars. Those narratives helped to give me an idea of the fears and emotions and the just plain “had to be done by somebody and it looks like that’s me” that went through men’s minds when faced with adversity and battle.

Q. Did you visit the sites of the Civil War actions you chronicle? If so, how did that help you write those scenes either accurately, evocatively, or both? If not, how did you gain such a detailed sense of the terrain through which Lewis Raines moves?

After visiting Gettysburg in 1975, I never returned. But both the Michael Shaara and Shelby Foote books I mentioned earlier give pretty detailed descriptions of the terrain the battle was fought on. While researching the book’s Civil War section, I looked up the weather conditions for that day as well as military maps and the like, all of which, fortunately can be found online. As for the rest of the country that Lewis moves through and lives in after that war, I grew up in it and know it pretty well!

Q. I don’t want to give away key parts of your plot, but I think I can safely say that Lewis and Hilton Raines come back from their respective wars equally affected and yet changed in different ways. Could you speak to that a bit? How does dividing the book into the perspectives of these two men rather than following a single story allow you to explore, for example, the trauma of war? How do you see each in terms of your title, as a “man without hate?”

Two different wars, two different men, two completely different times. Lewis is based on some pretty hardscrabble great-uncles and great cousins of mine who grew up in the part of Georgia that he comes from. Those men, as I remember from my youth working on their tobacco farms in the summer, did not show emotion. Only small signs—for example, the occasional smile from one of them here and there over the actions of a child, something their wife said, or a joke told between men—suggested that they were not as hard-shelled as they let on to be.

Hilton Raines, the protagonist of the final section of the novel, comes from an easier time, at least for him. He resides in a city, not on a farm and his life is pretty stable, despite the woes of the Depression of his early years, because his father, John, is a successful lawyer and city founder. So when he is thrust into the reality of war in the jungles, he gets as rude an awakening to the reality of another side of life—war, and killing, and being killed, none of it remotely as glamorous as the fictions of his youth might have portrayed it to be—as anyone could get.

As your question and the book's title suggest, hatred is one of the key themes I explored through the stories of the two men. Lewis’ war changed him, hurt him, but also helped him grow up. Falling in love made him helped him evolve further. Despite the killing he did and had to do, with only one exception none of it was done from any sort of hatred. Hilton had never been exposed to the hate that men can possess, doesn’t know how to take the rude jokes his army buddies make about the Japs, and only begins to get a real feeling of the cruelty of war when he and his commanding officer enter the heart of Manila after the battle is over. He can never truly recover from the shock of what he witnesses there and in the end, the only man he hates is himself.

Q. Your latest novel is the second in the trilogy Men Without Hate begins. Tell us a bit about that.

Raines in the Day evokes life in the first half of the 20th century through the character of John Raines. It’s filled with both historical figures and fictional ones; in the latter regard, John is the son of Lewis Raines and the father of Hilton Raines, the two fictional protagonists of Men Without Hate.
Raines in the Day begins in the summer of 1917 right before war is declared between Germany and America, while John is working in his brother RL’s law firm in Fort Myers. John’s story ends in the summer of 1961, on his ranch on the other coast of Florida as a small plane from Cuba comes in for a landing on the strip Raines allows Cuban dissidents to build on his land. I envisioned John Raines as a man trying to do the best that he can in the world he resides in, hopefully without sacrificing his moral values. The novel details the ways in which he succeeds at this along with the ways in which he doesn’t. 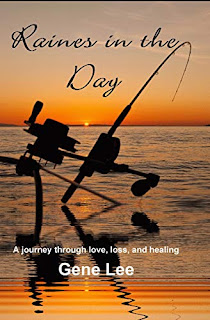