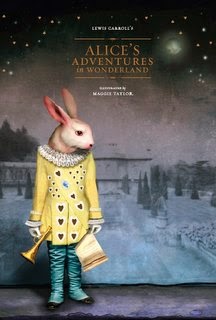 To say that visual artist Maggie Taylor illustrated the University Press of Florida edition of Alice's Adventures in Wonderland feels at once entirely accurate and yet entirely wrong. Illustration is often assumed to be a subservient role, a mere sort of coloring-in of a writer's lines. But while Taylor's digitally-crafted images honor author Charles Dodgson and his story, that is not all they do. True, they mirror "Lewis Carroll's" text, not just its incidents but also its dreaminess, its surprises, its wonder, its whimsy, its conflation of logic and illogic--qualities that Taylor's extensive body of work beyond Alice shares. But they also extend, explore and question that text (and its earlier illustrators), as well as succeeding entirely on their own terms. With their painterly richness, their tension between "realism" and artificiality, their diverse source material, and their use of 19th-century photographic images, they create a still and magical space that is at one and the same time historical, contemporary, and utterly timeless. So19 was pleased to be able to dialogue with Maggie Taylor about her craft, her inspirations, and her approach to a classic text. For more information on Taylor and her work, visit her artful website; the trailer for the documentary This is Not Photography, about Taylor and her husband, Jerry Uelsmann, is also a delightful glimpse of the artist. Alice's Adventures in Wonderland can be bought at the University Press of Florida website among other locations <
SO19: Philosophy and photography: you and Charles Dodgson have interests in common. Was that among the reasons you were drawn to illustrating his work?

MT: I do not recall when I first read Alice's Adventures in Wonderland, but I am certain I saw the Disney movie version of it at some point as a child. I had no particular fascination with it, and preferred watching or reading science fiction/futuristic things. But after a number of people mentioned similarities to some motifs in my work in the early 2000s, I reread the story. Charles Dodgson's photographs were something I was not really aware of until I started doing further reading on him. I knew and loved the images of Julia Margaret Cameron. Dodgson's works incorporate some of the same romantic Victorian sensibilities, as well as the use of costumes and literary references. His delight in word play and interweaving of politics, history, nursery rhymes and philosophy fascinated me. I collect photographs of Victorian children (and adults) who were roughly contemporaries of Dodgson and Alice.


SO19: What initially inspired you to approach this particular text as material for your artwork? To translate the prints to the UPF version?

MT: When I began creating my digital composites to accompany the story, I envisioned making only 10-12 images that would feature Alice, the White Rabbit, and the Mad Hatter. But as I got further along in the process, I realized there were so many characters and stories within the story that I would need to keep working. In the end I had 45 images for the 12 chapters. My work is done in the computer, using Photoshop, and then I make inkjet prints in a limited edition in my studio. When I found a publisher for the trade edition of the book, which was printed in 2008 (all of the original text with my 45 images), I wanted to be sure that the images would be printed in a large size with great color and paper. I was amazed that we were able to get the book images to nearly match my original inkjet prints.

For the book design, I selected Connie Hwang because of her wonderful eclectic taste. At the time, she lived in and taught graphic design in the of and Art History at the . We spent a lot of time researching Victorian motifs, everything from jewelry to wallpaper patterns, and she tried to marry the digital world to the Victorian world in her book design. I love the result.


SO19: Many artists in many fields have re-imagined the books. Yet as your images prove, there’s always room in these for fresh surprises. Did you have any of these earlier artists in your visual inventory, so to speak, as inspirations to follow or resist?

MT: During the three years that I worked on , I looked at every possible edition I could get my hands on or see on the Internet. I particularly loved the original Tenniel illustrations and wanted to honor them but make enough of a departure to make the work my own. I found that the British Library has a digital on-line representation of the original manuscript, which was given to the real Alice, Alice Liddell, as a Christmas gift. Dodgson/ Carroll's own drawings were quite different from the Tenniel illustrations and I really liked that fact. It gave me a little more mental freedom to depart from what I had perceived as the classic blonde in a pale blue dress. My perhaps more resemble the original Victorian girl, who had brown hair, and I favor green dresses because it is my favorite color.

When the copyright for the original text expired in the early 20th century, there was a flurry of new editions with some marvelous watercolors. I particularly like the images of Bessie Pease Gutman and Arthur Rackham.


SO19: In creating your illustrations, you are literally doing what the story describes: changing the sizes and placement of things, creating new and strange juxtapositions, stretching the parameters of “reality.”


MT: Many of the "raw materials" that I assembled for the images were toys—small plastic replicas of the various animals and objects. I look for items in junk stores, antique fairs, and online at sites like Ebay. I scan them in and make layers in a Photoshop file. I spent hours and hours on Ebay and other websites to find the right miniature houses, hedgehogs and hats. One of the very first images I made for the story was growing smaller/larger in the hall with a table and the key to the garden. I could not decide whether she should be small or large, and then realized that with the computer I could have her be both.
SO19: Could you talk briefly about the process of creating the images, the steps from vision to completion?
MT: I never start an image with a preconceived idea of the finished work. I just scan in various elements that might work in the scene and begin to place and size them. There is usually a lot of retouching to be done on 19th-century photographs. Over the course of two weeks or so I am able to come up with something I like, and then I start to fine-tune the color and make test prints. It is a slow process, and on average I make 10-15 images per year.


SO19: Choosing must have been an especially interesting task. Where did you find the source images? What were your criteria as you chose and manipulated source images?

MT: The 19th-century photographs I am using are daguerreotypes, ambrotypes and tintypes. I have been collecting them for about 25 years now. They were made between 1845 and 1890, are unique, and we do not know in most cases who the photographer was. I realized very early in the process that I do not have one girl in multiple poses, so I would have to use a number of different girls to represent . I think of it as "every girl is ." They range in ages from 6-16 as best I can tell. Exposure times in the photographer's studio probably ranged from 30 seconds to several minutes, so the girls have very staid expressions. They would have had braces behind either their waists or heads or both, plus they would have leaned onto tables to help them hold still. Smiling was not really an option. I find their expressions to be quite dreamlike.


SO19: You’ve given your scenes a lot more space, visually and figuratively, than artists like Tenniel and Rackham did. They have the kind of openness and amplitude reminiscent of, say, Magic Realism.

MT: In general, my work tends to blend interior and exterior scenes, which gives a bit of a wider window on the world. My husband, photographer Jerry Uelsmann, is known for utilizing multiple negatives in the darkroom and often blending interior/exterior spaces, so perhaps this is his influence on me. The color palette I seem to prefer is very much influenced by Magritte, Frida Kahlo, Magical Realism and Surrealism. I am always excited by the ability to include or sample bits of photographic reality in these more painterly images I am making.

SO19: All sorts of devices, including border treatments and more, make these settings obviously artificial—very modern, or postmodern, yet also reminiscent of 19th-century studio photographs. Can you comment on your thinking about this?
MT: When I scan daguerreotypes, I remove the metal matte that surrounds them. Underneath, on the silver surface, there is usually a patina developed in the areas that have been covered. Sometimes there are also marks at the edges where the plate was hand coated with the emulsion. I like these as a framing element, so even if the image I am working on does not have this edge, I can borrow it from another old photograph. So using modern technology, I can sample bits and pieces of the 19th century and have them as part of the image.
SO19: The landscapes behind and around the figures are beautifully rich and suggestive—with hints of European history in some, a resonant sense of wilder terrain in others. Any comments on these settings, your choice of them, their sources?
MT: I create the backgrounds of the images from multiple layers, mostly sourced from travel snapshots that I take. Over the last 15-20 years I have had the opportunity to photograph wonderful gardens and buildings in Germany, France, England, Wales, Austria, Ireland, Italy…and they all filter into my visual vocabulary. For example, in the image Explain yourself!, which pictures the caterpillar, the background shows remnants of a baroque theater in Cesky Krumlov in the Czech Republic, combined with a pile of leaves outside that theater, and a sky from Florida. Some of the same leaves are used as a foreground in An Invitation with a background of a foggy forest in northern .
SO19: Any chance of your taking on Through the Looking Glass or some other 19th-century text? What’s next in your work?
MT: I have taken a break from to go back to my regular work, which is basically whatever I feel like making. But yes, I am considering working on some more images for Through the Looking Glass in the next year. I have begun to collect little elements here and there! <