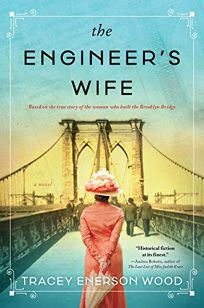 As a former New Yorker, it was a particular pleasure for me to review Tracey Enerson Wood's The Engineer's Wife for Publishers Weekly. The novel spans the life of Emily Warren Roebling from 1864 to 1884, the period in which she played a crucial if sometimes behind-the-scenes role in the extraordinary undertaking that was the construction of the Brooklyn Bridge. With his father John, Washington "Wash" Roebling designed and planned to construct the bridge, which represented an immense engineering challenge for reasons including the width, turbulence and heavy traffic of the river it spanned. But John died fairly early in the construction process and Washington was sidelined for years with so-called "caisson sickness," now informally called "the bends," from his visits into the watertight caissons used to sink the bridge's foundations. Emily becomes his eyes and ears at the construction site, then gradually takes on more challenging tasks including site management, design troubleshooting, and public relations. Emily's intelligence, drive, and ability to assimilate new information all serve her well in the work, which nonetheless remains a disappointment: women suffrage is the cause dearest her heart, and she had hoped to use her skills in the service of that instead. Wash also poses a challenge, as he is not just physically crippled but also emotionally unavailable over the years of the arduous and dangerous work. In some sense Emily herself becomes a bridge: between Wash and the construction site, the construction site and the public, and her own past and future.

Reading The Engineer's Wife, I regretted not having walked the bridge during my time in New York. Its Manhattan end wasn't far from the Wall Street firms among which I began my career; the problem was, like so many New Yorkers, I worked such long hours I didn't savor any of the city as fully as I might have wanted to. I plan to make up for this once our new era of social isolation ends and I can travel to the city again. In the meantime, The Engineer's Wife let me travel in space as well as time, experiencing the project when it seemed more like an alarming risk than a city icon.

Read my review of the novel here.