So19 Interview: CHRIS NICKSON on THE MOLTEN CITY 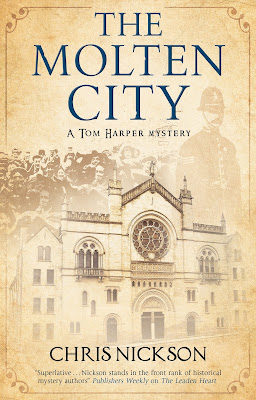 We're delighted to have friend of So19 Chris Nickson back in the journal to discuss his latest novel, The Molten City, which appears on March 31 in the UK and July 7 in the US. Chris was one of our earliest interviews when the journal began in 2015, and he's covered a lot of literary territory since then! You can read our earlier interview with Nickson here; find out more about the author, his books and his musings here; and follow him on Twitter and Facebook as well.

This spring, you're celebrating your tenth year of writing about the city of Leeds, your home town, along with the publication of your 22nd novel set there. What do you think makes it such an enduring subject and inspiration for you?

I can’t quite define why Leeds keeps giving me stories. That’s certainly what it feels like. The bits of history, like the Suffragette Riot in The Molten City, for instance. They offer a springboard into something and make me want to help those times come alive for readers. It’s been the same with all my series set here, whether it was Richard Nottingham in the 1730s or Dan Markham in the 1950s, to make Leeds into a living character. I suppose the simplest way is to say that I feel the place in my bones, it’s in my DNA. My own family’s stories are here. I lived elsewhere for many, many years, but being back, I know it’s where I belong. Quite possibly I’d never have felt that in the same way if I’d never left; I don’t know. And there are so many stories from this place still to tell. I’m just the chronicler.

Your first interview with Society Nineteen discussed the series' second book, Two Bronze Pennies. That book is set in 1890, The Molten City—the series' eighth installment—in 1908. Could you talk a bit about how Leeds, the series' primary setting, changes between those two dates? What shifts feel most dramatic, and/or most relevant to the series?

From 1890 to 1908 might not seem like a huge stretch of time. But so much happened. Leeds became a city (in 1893). There were huge architectural changes in the centre, ripping out many of the poorest courts and yards where people lived, then replacing them with upscale shopping arcades. Leeds expanded, sprawling and eating up what had once been outlying villages. Then there was transportation. A move from horse-drawn trams to electric, and the advent of the motor car and the lorry, even if the horse was still the main form of transport in 1908. Things were changing. With the move from the Victorian to the Edwardian Age, there was a definite feeling of coming into modern times. That it largely coincided with the turn of the century doubtless helped. That said, the old queen still cast a long shadow, and would for several more years.

I'm sending you these questions at a time when American unemployment (and, of course, that in countries around the globe) has hit a shockingly dramatic and painful high. So the frustration of the unemployed in The Molten City feels especially timely right now. I wonder if you could tell readers a bit about this element in the plot. Why was unemployment such a hot-button issue at the time the novel is set?

Unemployment was such an important issue because there was no unemployment insurance at this time, and no proper help for those without work – and there had been a downturn in trade, which meant that many men didn’t have jobs. It was an issue that affected many cities, but different industries experienced higher numbers than others. It was also a time when men expected to support their families themselves, so without their income, there was nothing. The safety net of the welfare state, threadbare as it may be these days, didn’t exist at all. By October 1908, men were out in front on the Town Hall regularly and had forced the council to supply small pieces of help. But there was nothing lasting or consistent, and there was a growing sense of outrage and impotence. With the Prime Minister visiting, it was no surprise that tempers were likely to boil over; after all, he was the man who could change things – if he wanted to.

I loved the threads of the story that related to woman suffrage movement. For readers not familiar with its history in Britain, could you talk a bit about the difference between the suffragists and the suffragettes and how the latter posed challenges for police personnel like Tom Harper?

Women’s suffrage was an issue all through the 19th century and into the 20th. When the Great Reform Bill, which first altered voting a little, passed in 1832, a woman from Leeds made a request for women to have the vote; it was laughed out of the Commons. From the 1860s onward, there were petitions, and with the 1870s, the grown of Women’s Suffrage Societies around the country. Their aim was to educate and persuade. In the books, Annabelle becomes a Suffragist, and a local speaker from women’s suffrage. With the change in laws for local elections in 1894, all ratepayers, men and women, could vote, and she ran to become a Poor Law Guardian, one of the few offices open to females. However, the Suffragists achieved little in Parliament. In 1903, the Suffragettes began, under the direction of the Pankhursts, and began to look more at action rather than words. For a while there was an uneasy truce between Suffragists and Suffragettes. Soon, though, the Suffragettes moved to confrontation and action. Some were imprisoned and force fed. There was an increase in violence and arson up until the First World War. Once hostilities began, the Pankhursts stopped activities and became great patriots.

Tom's wife Annabelle has played such a vivid role in the series. More recently, the couple's daughter, now sixteen, has grown up enough to be a character with enough agency to help drive the plot. Tell us about Mary, her personality and her plans. Why did you decide to give Tom an only daughter?

Mary Harper is 16 by the time of The Molten City. She’s a child of Sheepscar, a very working-class area, but with a mother who runs a public house and is quite well-off, certainly for the neighbourhood, and a father who’s a senior police officer, meaning a decent salary. She’s never wanted for anything. She went on to secondary school, although most of the classmates from primary would have gone straight to work. She’s always been smart, precocious, and had a scholarship to Leeds Girls’ High School – but even then her parents had to pay for uniforms, etc. And the education ended at 14. From there, a secretarial course, and the start of the book finds her working for a solicitor. Yet she knows what she wants, to run her own business. But she’s always been quite ambitious that way. She’s grown up with a mother peaching equality and the vote; it was inevitable she’d be political. But Mary has become a follower of the Suffragettes, and maybe that sense of doing something, of being more active and loud is natural for someone young. A feeling of doing something. Why only one child for the Harpers? They started late, both in their 30s. But Annabelle was a widow when they met, and it was a couple of years before she became pregnant. Maybe there were medical problems. At that time there wasn’t the knowledge to understand. And why did I give them a daughter? No idea…I have one child, but he’s a son, so go figure.

At the start of The Molten City, a fourteen year old child abduction case is unexpectedly reopened. What inspired that storyline? How did you research attitudes toward and crime related to the "trade" in children at that time?

Child-snatching is a crime that’s probably gone on for centuries, in one form or another. Corruption is nothing new, either. I thought mixing the two could be interesting. What I did realize later is that the book became a meditation of families. Ones that are whole and ones that are broken, and the ripple effect of the pain. That’s taking me into Ross MacDonald territory, but it’s one of the most important things. Most of the writing on this comes not from research, but from my imagination, and no apologies for that. There are some records for earlier in the century, but it’s more about the basic human emotions for me.

You also depict nineteenth-century Leeds in your two Simon Westow mysteries, The Hanging Psalm and The Hocus Girl. What does that series allow you to explore that the Tom Harper books don't in terms of Leeds, law enforcement, or anything else?

The Simon Westow books are set in the 1820s, more or less midway between my Richard Nottingham and Tom Harper stories. A real police force is still more than a decade away, it’s still the constable and the night watch. We’ve hit the Industrial Age, even if it’s still relatively young, and Leeds is one of its centres, smoky, dirty – and more and more people arriving every week to try and find job in the manufactories. That means the town is overcrowded and filled with the poor. The streets aren’t paved with gold for most. There’s plenty of crime and people advertise for the return of stolen items. That’s Simon’s job. He’s a thief-taker. He finds and returns those objects for a fee, and makes a good living doing it. For offences like theft, the victim would have to bring a prosecution at his own expense, and understandably, most don’t want to bother. They want their goods back. So it’s a relatively lawless time, but one of huge social upheaval. Engineering and manufacturing are coming to the fore, and the engineers are the ones driving change and often growing rich. More and more chimneys are rising and pouring out their smoke, and the dichotomy between rich and poor is stark. The books give me a chance to explore that and its consequences. It’s the world Dickens knew. The fact that the main character is a thief-taker, both of the law, but also outside it – effectively an early form of private detective – gives a chance to look at things differently, too, and bend the rules quite a bit.

What's next for you?

I have a third Simon Westow coming out later this year, and another Tom Harper, this one set in 1913, arriving next year. I’ve been working on a fourth Westow book, but I’ve set that aside. Anger is the fuel for those novels, and it’s impossible to feel that at the moment. Instead, I’m trying to write a Richard Nottingham short story. He’s a man of compassion and sorrow who seems to suit the world as it is right now.