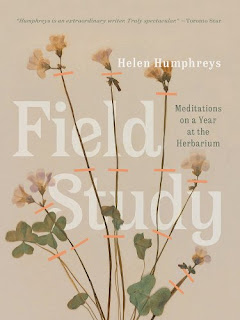 I'm delighted to feature an interview with Helen Humphreys about her resonant new book, Field Study: Meditations on a Year at the Herbarium, today. Small in size but imaginatively wide-ranging, Field Study uses reflections on herbaria—the collections of dried plant specimens made by both amateur and professional botanists to preserve and share information about plant species—as a means of connecting to the plants and plant lovers of the past, the plants of our present, the endurance as well as fragility of nature itself, and the seasons of our journeys both personally and as citizens of the Earth. It's filled with fascinating lore and detail, yet it's also a profoundly meditative book: an elegant, quiet, and compelling record of one woman's journey into past and present, the outside world and her own imagination. As beautifully designed and illustrated as it is written, it's a wonderful read as well as a perfect gift for anyone who loves plants, nature, environmental and scientific history and/or reflections on women's lives.
Helen Humphreys is the author of numerous books of poetry, fiction and nonfiction. My own favorites among her works include, in no particular order, Nocturne, The Ghost Orchard, The River, Leaving Earth, and (of course, for a feminist lover of the 19th century) Afterimage. Field Study: Meditations on a Year at the Herbarium  appeared from ECW Press on September 21, 2021. It can be purchased at venues including Amazon.ca in Canada and bought in the US on Amazon, Bookshop.org, and through your local independent bookstore. With thanks to Helen for her thoughtful answers as well as her extraordinary book, here's our chat.

Q. Could you speak about the gestation of Field Study? What gave rise to the idea for the book at this moment in our communal lives and/or your own creative trajectory?

A: As I explained in the Introduction, I was looking for a way to write about nature that didn’t turn away from the dire facts of this present moment, but still allowed for praise. I decided on the herbarium because I wanted to show the interaction of humans and nature through time, and the herbarium seemed the perfect crucible for that exploration. I started writing and researching the book before the pandemic, so the subject matter wasn’t as timely as it became later on, after the book was published and the lockdowns had focused people’s attention more on the natural world.

Q. The first text we see after the title page reads, “This book was researched and written on the traditional territory of the Anishinaabe and Haudenosaunee peoples. I am grateful for their long and vital relationship with the plant life that inhabits this region.” That felt so important—could you talk about it a bit?

A: I wanted to give a land acknowledgement at the start of the book, as I give a land acknowledgement at the beginning of anything public that I do. It’s only right and proper to honor the people whose traditional territory I live and write in.
Q. I love the book’s structure, which employs section and chapter breaks while also feeling fluid and organic—the connections between elements are always powerful but not necessarily linear. How did the structure, order and/or elements change as you wrote, if at all?

Q. Field Study introduced me to (or, in a few cases including Mary Treat, reintroduced me to) so many interesting figures as well as the way their characters manifest in what they collected, how they laid out their specimens, and the like. Were there one or two who particularly inspired, interested, or even challenged you?

A: Well, I would have liked to have included little biographies of all the collectors, but some were impossible to trace. Of the ones I did include, I was particularly fond of Wilhelm Suksdorf, who named the locations where he collected plants after what he found or saw at that location. I also liked the husband and wife duo of John Gill Lemmon and Sara Plummer Lemmon, who botanized most months of the year, living outdoors and renting their house out while they were away, living on this rental income when they were home during the winter months.

Q. You write about Thoreau in the final chapter, just before the Epilogue. Could you tell readers who haven’t yet read Field Study a bit about his plant collection and why he felt like the right botanizer to close out the book?

A: Thoreau had an extensive herbarium that he had collected with his sister, Sophia. It is now housed at Harvard University, but is available to view online. Thoreau was very interested in plants and, through his extensive journals, documented his daily botanical walks and his various collecting excursions. There was a lot of material to draw from, with regards to Thoreau, and also, his reverence for the natural world is similar to mine, so I wanted to include him and his herbarium.

Q. Talk to us a bit about the Epilogue. As you write, rather than circling back to the herbarium or your personal experience of the natural world, you chose to end with a story that “contains both the hope and despair of what it means to live on this Earth in this moment in time, and yet the story takes place almost two thousand years ago.” How and why did you select this particular historical vignette as the final text we read?

A: I chose this story because I wanted to show that, although we do live in a particularly terrible moment in terms of our relationship with the natural world; there have been other terrible moments in history. Not that I want to downplay this moment, but more that I wanted to show the way hope and despair are sometimes joined, and how, in this moment, we have to keep holding onto hope.

Q. You’ve talked in interviews about being visually oriented, and Field Study notes your efforts to draw some of the plants you encounter. And of course, herbarium specimens themselves are visual as well as factual records. For all of those reasons among others, it’s fitting that the book (designed by Natalie Olsen) is so visually rich. What kind of ideas and input did you provide during the design process?

A: The design was entirely due to Natalie, but there was some back and forth about what would be included—which specimens might be good to show, how many of my little drawings should go in, etc. Writing is a solitary process, but publishing is always collaborative and there was a lot of collaboration on this book especially because of all the visual elements.

Q. Anything you want to share about what you’re working on now?

A: I’m working on a memoir about the writing life and dogs, particularly my own dogs. It’s called And A Dog Called Fig and is due out in March of 2022 from HarperCollins in Canada and Farrar, Straus & Giroux in the U.S. 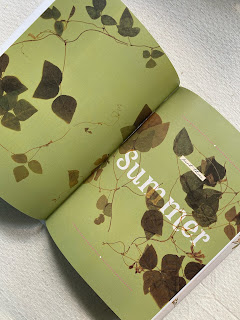