So19 talks with DEANNA RAYBOURN 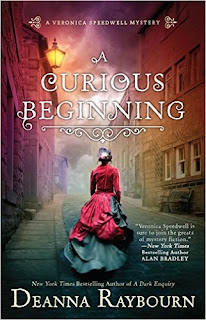 “I smoked opium once,” says melancholy taxidermist Revelstoke Templeton-Vane to Veronica Speedwell in the course of Deanna Raybourn’s sparkling new novel A Curious Beginning (NAL, September 2015). “It felt like listening to you, only rather more mundane.” It’s not surprising that a Victorian gentleman, however eccentric himself, might find Veronica befuddling. She is a young woman who knows her field (lepidoptery, pursued for both pleasure and profit), her men (safely enjoyed, and unsentimentally left behind, in distant locales), and above all, her own mind, which she expresses with delicious wit and candor. Whether she is driving away intruders with her impression of a Maori battle scream or musing on the salutary nature of what she calls a “carnal paroxysm,” she makes for delightful and very funny fiction. But she’s also a moving reminder of an often-overlooked fact. Victorian women did more than just swoon and change for tea. They were not only docile maidens and dutiful wives. They were travelers and educators and inventors and explorers, braving the same danger their male counterparts did as well as the perilous frontier that was social convention. In Veronica Speedwell, Raybourn pays playful homage to those women—and to the inner adventurer so many of us hide even today. The publishing career of Deanna Raybourn began in 2007 with Silent in the Grave, the first of five full-length and several novella-length Lady Julia historical mysteries. (To fans’ delight, the series was optioned for British television earlier this year.) Also the author of three stand-alone novels set in the 1920s, Raybourn has won RITA and Romantic Times awards and been nominated for other honors including the Agatha, Daphne du Maurier, and Dilys Winn awards. To find out more about the author, visit her website, read her blog, and follow her on Facebook and Twitter. Society Nineteen is delighted to talk with Deanna Raybourn about inimitable women, eccentric (and attractive) men, Queen Victoria, and the "weird wonders" of the nineteenth century. —SF

So19: You are the creator of another memorable Victorian heroine, the inimitable Lady Julia. What has it been like crafting another protagonist from the same era? Did you find yourself consciously differentiating them, or was it a more intuitive process?

DR: It was highly intuitive, largely because they have very different voices. Veronica and Julia originate from quite separate places; Julia is the petted and feted daughter of an earl while Veronica is essentially a foundling making her own way in the world. Julia’s confidence stems from being born into a certain lifestyle, and once or twice her confidence has been shaken as she has tried to figure out exactly who she is besides someone’s wife or daughter. Veronica, on the other hand, is a self-made woman. She never suffers a true crisis of confidence because her sense of self has been acquired the hard way, through tribulations. Where Julia has very often had people to do for her, Veronica has always had to go and do for herself. It's tested her mettle and given her an unshakeable belief in who she is and what she can do. On the surface 0; they both seem to be similar—strong, late-Victorian ladies with a penchant for snooping. But they are psychologically quite different, and that makes it very interesting to write Veronica.

So19: More specifically, tell us about the “seeds” of the character that became Veronica Speedwell. Was there any specific starting point or inspiration? Was Victorian lepidopterist Margaret Fountaine any part of your thinking?

DR: Absolutely—I adore Margaret Fountaine. I have been casually studying the Victorian female explorers for a few decades; whenever I am between projects I always seem to end up reading whatever I can get my hands on about their travels. I have amassed a small collection on the subject, and my favorite books are their own journals. I was lucky enough to find a copy of Margaret Fountaine’s first journal and settled in to read it, thinking it would be about butterflies and trips abroad. But then it took this delightfully salacious turn and she started describing her dalliances! It was utterly enthralling to read about her flirtations, and the more I read, the more I wanted to create a character with the same indefatigable energy, the same zest for life and adventure. Veronica is influenced by all of these intrepid explorers, but I gave her Margaret’s butterflies as a particular homage.

So19: As I mention in my introduction to our chat, the character of Veronica feels like a kind of homage to the many indefatigable female adventurers of the 19th century. In addition to Fountaine, one thinks of Isabella Bird, Amelia Edwards, Mary Kingsley, Isabelle Eberhardt, and Marianne North, to name a few.

DR: I call them the parasol and petticoat brigade—with tongue firmly in cheek!—but they were so much more. Most of them started off with very conventional lives, and I’m always intrigued by the tipping point, by what pushed them to start traveling and embrace adventure. They were courageous, wildly so in some cases, and they faced death and discomfort with equanimity. I find them incredibly inspiring, largely because what they were doing was so beyond what was expected of them. They just kept pushing forward, sometimes in the face of impossible odds. Luckily for me, many of them wrote about their experiences and those journals and letters make for fascinating reading.

So19: The story coincides with the Golden Jubilee of Queen Victoria: another embodiment of female strength and survival, if in a very different way from Veronica.


DR: I have extremely mixed feelings about Queen Victoria. She presided over a period of greater change than any monarch to that point; she became a legend through her sheer longevity. She is an extraordinary symbol of an idealized England and Empire. But the woman herself was much more complicated. She could be tyrannical and petty with her own family; she was demanding and selfish and hot-tempered, and she had a gift for manipulation. She was, I think, quite unlikeable as a person, which makes her all the more interesting. There was nothing easy about Victoria, and in that respect she and Veronica are similar—I don’t expect Veronica would have been a necessarily comfortable person to befriend. They both have energy, drive, purpose, and strength, just expressed in terribly different ways.

So19: Designed to permit her to travel light, collect Lepidoptera, and when necessary foil dastardly attackers, Veronica’s wardrobe is both ingenious and hilarious. Did you base any of her unconventional gear on historical garments, or just have fun inventing them yourself?

DR: Veronica’s wardrobe is entirely my own invention. I started with the slimmer silhouettes of the late 1880s and tried to imagine the restrictiveness of that type of clothing for the particular activities Veronica enjoys. From there, I figured out how to modify it. For instance, the fairly narrow skirt that was in fashion at the time is certainly more maneuverable than the enormous crinolines of the 1860s, but it hampers walking with a long stride, riding, climbing. So I adapted the skirt by giving her slim trousers underneath and long slits in the skirt which can be configured a number of ways to give her more ease of movement. I’m especially proud of her hat—it serves a multitude of purposes and its lavish roses tell you quite a bit about her dashing personality!

So19: Let’s talk about Revelstoke Templeton-Vane, known as "Stoker." Veronica’s partner in crime and detection, her nemesis, her sometime reclamation project, and a source of a distinct frisson or two, he’s a wonderfully eccentric figure…and delightfully different from the traditional romantic hero.

DR: Ah, Stoker. He is one of my favorite creations—ever. He is complicated and snarky with a biting wit and a big heart he is somewhat embarrassed by. I have written heroes who were outsiders looking in—notably a half-Gypsy who married into the English aristocracy. But Stoker is my first true aristocrat. He is the son of a viscount and he rejects everything that world stands for. He cringes a bit when people refer to him formally as an “Honourable.” He just simply has no patience for things he doesn’t find worthwhile, and that makes him actually quite true to many aristocrats I’ve encountered in my research. There’s an inbred confidence in him that’s been badly shaken by his experiences, and over time we will get to see exactly what those experiences have been. For now, it’s enough to know that he is at a crossroads when Veronica meets him; he’s on the brink of self-destruction and he has to decide whether or not to claw his way back to self-respect.

So19: I loved the way you evoked the world of Victorian scientific exploration, collecting and display. The backdrops against which Veronica and Stoker work are so full of weird wonders. Though it occurs to me that the same could be said of the traveling circus in which Veronica and Stoker briefly take refuge. That too is about the commercial possibilities of the odd and exotic, perhaps.

DR: “Weird wonders” are my favorite things! I take tremendous pleasure in my research, particularly the reading that turns up oddities you never expect to find. I actually have to tone down what I put into my fiction because most people would never believe such things existed. In the case of the traveling show, I researched Victorian circuses and sideshows and fashioned something that would have been quite plausible for a sort of low-rent attraction that toured the provinces rather than one of the splashy, spectacular extravaganzas playing to packed houses in the capitals of Europe. I wanted the feeling of a rather threadbare, down-at-heel collection of people because having Veronica mingling with them shows how at ease she is in any situation—even the most unexpected.

So19: Veronica’s narrative voice, and therefore the voice of the book as well, is delightfully dry and epigrammatic. It’s like a late-19th-century version of Twitter, where you yourself are extremely amusing and where Veronica would no doubt thrive! So she’s of her time, but also in many ways very “modern.”

DR: Why, thank you—I love Twitter. It feels very natural to me, unlike Facebook which feels oddly forced. The quippiness of the character limit on Twitter just suits me, and I am quite certain it would indeed suit Veronica. She is modern in the way that many late Victorians were; she is looking to the 20th century with enormous anticipation. She likes science and invention and the broad vista of possibilities just being explored at that time. She is the very last woman who would be looking back with nostalgia at times gone by.

So19: What are you working on now—can you give us a glimpse?

DR: I am revising the very last pages of the second Veronica Speedwell novel, and then I am heading out on book tour. After that I’ll start the third Veronica adventure, so there’s lots more to come from her—and Stoker!