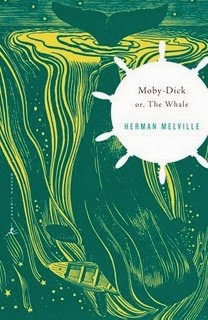 Herd a bunch of English professors into one room—serve some wine or beer—and inevitably they start playing this parlor game: "What's the most famous work of literature you've never read?"


Topping most lists is James Joyce's Ulysses, followed by Herman Melville's Moby-Dick. I've actually read both, but loved only one. While I am bored stiff following Leopold Bloom and Stephen Dedalus around Dublin—and cannot wait to get to Molly Bloom's final outcry of "yes I said yes I will Yes"—I want to dive deep into every single marvelous page of Moby-Dick.


Supposedly Melville's 1851 classic has one of the most oft-quoted opening lines in literature: "Call me Ishmael."


Call that: bull-dinky! Any lover of The King of the knows that Moby-Dick opens with "Etymology," SUPPLIED BY A LATE CONSUMPTIVE USHER TO A GRAMMAR SCHOOL (Melville's caps, not mine). The late consumptive usher (Lord, there's a great character right there) delivers three quotes on the derivation of the word "whale" (or "whale-fish"). He teaches us how to say "whale" in thirteen languages, from Hebrew to Erromangoan. For the curious, that would be PEHEE-NUEE-NUEE. And just in case your seafaring lands you upon an isle where such pronunciation might make the difference between life and death, in Fegee you must substitute a K for the first H: PEKEE-NUEE-NUEE.

"Etymology" is followed by "Extracts" SUPPLIED BY A SUB-SUB-LIBRARIAN. This sub-sub—whom I picture as a cross between Bartleby the Scrivener and the boatswain on the 1960s' maritime sitcom, McHale's Navy—provides us with "higgledy-piggledy" statements about "what has been promiscuously said, thought, fancied, and sung about Leviathan," beginning with "And God created great whales" and ending with a rousing sea-shanty:


The first time I dared to pick up Moby-Dick in my college library, I thought: What is this crazy shit? I suspected this faux opening was planted by some illustrious literary critic such as Harold Bloom (who—like some out-of-control perv—seemed to have his hands on every text assigned in both my American and British literature courses). But then I realized Melville himself was behind these two ECCENTRIC CHARACTERS and I got sucked into the vortex. I sat down on one of the library's cracked vinyl armchairs and savored every page of this delicious cetological trivia.


It was almost a disappointment to land on Chapter One: "Loomings." How could Ishmael top the language of Genesis, Schouten's Sixth Circumnavigation, 's Voyage of a Naturalist, the charmingly-crazed Charles Lamb? But—thar she blows!—he did. Ishmael's voice mesmerizes the reader. Who—male, female, young, old—cannot identify with the narrator who tells us that some years ago, finding himself with naught in his purse, decided to "sail about a little and see the watery part of the world?”


Ishmael takes to the sea whenever ordinary life on land becomes too much to handle. "Whenever I find myself growing grim about the mouth…whenever it is a damp, drizzly November in my soul…." Whenever Ishmael brings up the rear in a funeral and whenever he wants to methodically knock the hats off men he passes in the street, he throws off the cloak of the misanthropic depressive and boards a boat.


We take the journey with him. We feel the dampness of , the soothing steam rising from the bowls of hot chowder. We meet a marvelous cast of international eccentric characters: Queequeg in his coffin, Fedallah, Tashtego, Daggoo, Pip, Stubb, Flask, Starbuck. We learn how to tie knots. How to butcher a 50-ton "fish" that really is a mammal. We take in the stench of ambergris—which is the basis for sweet-smelling perfume—and learn the difference between the stinking sailors on the ship and the civilized drawing rooms on land, where "fine ladies and gentlemen…regale themselves with an essence found in the inglorious bowels of a sick whale."


I cannot claim I love all of Moby-Dick. Some tedious chapters beg to be skipped on the re-reading: the sermons and grandiose soliloquies. Other chapters, such the one devoted to the sperm-squeezing frenzy, give rise to immature giggles (Ringy dingy: Herman Melville calling Doctor Freud!) I also loathe the central character, Ahab. And his peg-leg. And his foul temper. And his archaic language. The way he dashes his sailors against the bulwarks ("Avast! Man the boat!") and the way he brings down the whole Pequod in his maniacal quest to slaughter the white whale.


But the quest is thrilling. There are sightings, near misses, and upheavals that culminate in three days of the chase. And—plot spoiler here, for all you profs who didn't make it through the entire novel—a tragic ending.


But one does survive the wreck. And this, I think, is what most draws me back again and again to Moby-Dick: the glorious epilogue in which Ishmael goes down with the Pequod, yet rises up and lives to tell the biggest-fish story ever told. <Rita Ciresi is director of creative writing at the University of South Florida and author of the romantic comedies Pink Slip, Blue Italian, and Remind Me Again Why I Married You, and the story collections Mother Rocket and Sometimes I Dream in Italian.  Visit her website at www.ritaciresi.com.
Email ThisBlogThis!Share to TwitterShare to FacebookShare to Pinterest
Newer Post Older Post Home