So19 talks with LESLIE S. KLINGER 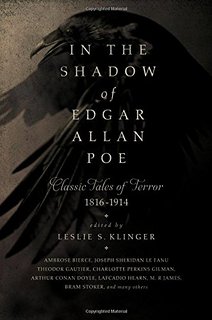 What would Halloween be without a shiver-inducing story or two? Not the pleasurably creepy celebration we've come to know and love, certainly. Happily, distinguished editor Leslie S. Klinger has created a new collection, In the Shadow of Edgar Allan Poe, (Pegasus, 2015) that's ideal for the occasion. As Klinger's anthology proves, Poe is perhaps the most celebrated, but not the only, master of the scary story. Numerous other writers in his time and beyond have also done superb work in the form, reshaping it with their own distinctive voices and visions, settings and themes. In the Shadow of Edgar Allan Poe juxtaposes little-known works by major authors with tales of terror by skillful writers who are mostly forgotten today. With both an engaging introduction and useful annotations, the result is a volume rich with pieces that illuminate forgotten corners of literary history as well as the nature of the tale of terror itself. Leslie S. Klinger is one of the world’s foremost authorities on Sherlock Holmes. He is the editor of the three-volume set The New Annotated Sherlock Holmes; the first two volumes, The Complete Short Stories, won the Edgar for “Best Critical/Biographical” work. He is also the author of The New Annotated H. P. Lovecraft, the Anthony Award-winning In the Company of Sherlock Holmes, and In the Shadow of Edgar Allan Poe. You can find out more about Klinger and his work on his website, Facebook page, and Twitter feed. Society Nineteen is delighted to wish you a suitably dark Halloween and to chat with Leslie S. Klinger about Poe, his brilliant if sometimes overlooked fellow authors, and the art of the terrifying tale.—SF

So19: You’re a prolific editor, anthologist and annotator whose books have focused on Stoker, Lovecraft, and, of course, Arthur Conan Doyle. How did this Poe project come about?

LK: I was creating a series of books for IDW that I titled “In the Shadow of…,” consisting of public-domain, 19th-century works of fiction that had been overlooked in the shadow of the fame of prominent works such as Bram Stoker’s Dracula and Conan Doyle’s Sherlock Holmes. Extending the concept to general horror fiction seemed natural enough—Poe has vastly overshadowed all other writers of the century. Partly this is due to the quality of Poe’s work, but partly this is simply bad luck or bad fortune—the success of Poe made audiences clamor for more work like his, but those fickle audiences often quickly forgot the authors. With a century’s distance, few of Poe’s contemporaries are remembered today, and many deserve to be.

So19: Poe’s influence on other writers is often discussed, but the question of who influenced him perhaps less so. For example, was he aware of or affected by the work of E.T.A. Hoffman, who has a tale in this collection?

LK: Yes, it is believed that Poe was quite familiar with Hoffman’s work. He was also influenced by the Gothic and early Romantic writers, such as the Shelleys and Coleridge.

So19: In addition to well-known names such as Arthur Conan Doyle and Bram Stoker, the collection features wonderful pieces by writers who are little remembered, at least in mainstream culture. Are there one or two of these whose obscurity you feel is particularly unwarranted, or who would be especially rewarding for contemporary readers to explore?

LK: Certainly M. R. James has his fans, but not nearly enough! Also, Robert W. Chambers’s book The King in Yellow (from which the story is drawn) and the work of Le Fanu, beyond Carmilla, should be explored. The most overlooked is probably F. Marion Crawford, who wrote many fine supernatural stories.

So19: The latest tale in the book dates to 1914. Why did you choose that cutoff point? Do you think that historical events beginning around that time—World War I, or the development of the “talkies”—changed the nature or tradition of the scary or spectral tale?

LK: No, there were simple legal reasons—I didn’t want to have to track down rights to post-1922 stories in the U.S.! I actually originally planned to include “The Great God Pan” or some other story by Arthur Machen, but because he died in 1947, his work all remains under UK copyright until 2017! Dunsany and Lovecraft certainly demonstrate the viability of the post-1914 horror story!

So19: Why do you think the short tale or story and scary or spectral themes seem to go so naturally together? Does it hark back to Poe’s notion of reading in one sitting, do you think, or perhaps to the tradition of telling ghost stories aloud?

LK: The novel format is very hard to pull off for horror, because it’s critical to sustain a level of verisimilitude up until the “punch line,” and that’s nearly impossible over 80,000 words or more, unless you simply have a string of unrelated incidents (such as in The Castle of Otranto) Lovecraft did this very well in The Case of Charles Dexter Ward and At the Mountains of Madness, but even those are not really full-length novels.

So19: I read Charlotte Perkins Gilman’s The Yellow Wallpaper several times in college and graduate school, always in the context of feminist writings. I’d never actually thought of it as a “tale of terror,” but it fits perfectly in the collection here and, in fact, shares various qualities with Poe’s finest tales.

LK: One of my very favorite stories!

So19: Place and interior spaces are among my personal interests, so I may be wrong here. But setting, however constructed and construed, seems very much a part of the structure and impact of these stories. Fair reading?

LK: Oh, yes. These are particularly contextual stories, with grand spooky settings that are as important as any of the characters.

So19: A number of the pieces in the book achieve their frightening effect using very subtle means. The Shadows on the Wall by Mary Wilkins Freeman, to name just one example, is a wonderfully scary, yet has absolutely no blood, guts, gore or violence.

LK: Blood, guts, gore, and violence are not essential to horror. The unnameable is what is essential.

So19: Do you have a favorite piece or two in the collection?

LK: You already mentioned “The Yellow Wallpaper,” of which I’m quite fond, but my favorite is Ewer’s “The Spider.” He’s a truly weird writer, and the story is very powerful. I don’t know that Lovecraft knew his work, but Lovecraft’s “Haunter of the Dark” has many echoes of this story.

So19: Perhaps you could talk about your current projects?

LK: One is a 2016 book from Liveright—the exciting true-crime anthology called Anatomy of Innocence, co-edited with Laura A. Caldwell. This is a collection of stories of wrongfully-incarcerated people—exonerees—told by the exonerees to major writers such as Lee Child, Sara Paretsky, S. J. Rozan, and others, intro’d by Scott Turow and Barry Scheck.