THE SOCIETY INTERVIEWS: Megan Chance on A SPLENDID RUIN 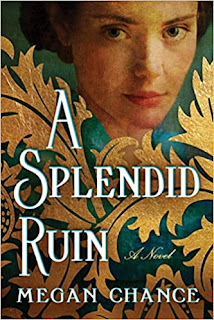 A new novel by Megan Chance is always cause for celebration—and cause for a So19 interview, too. (Read our chat with Megan on a previous novel, The Visitant, here.) Chance is the author of novels including Bone River, an Amazon Book of the Month; A Drop of Ink, an Editors' Choice of the Historical Novel Society; and An Inconvenient Wife, an IndieNext pick. In addition to her historical fiction novels, Chance is the author of the young adult Fianna Trilogy, short stories, and an entry in the recent anthology Stories from Suffragette City. Her novels have been translated into several different languages. Megan is a popular workshop speaker whose speaking credits include the Pacific Northwest Writers Conference among many others. Her latest novel, A Splendid Ruin, appeared in January 2021 and can be purchased on Amazon and Bookshop.org among other platforms. You can find out more about Megan and her work on her website and follow her on Facebook, Instagram, and Twitter. All that said, we're delighted to share our most recent chat with Megan, some fascinating background on A Splendid Ruin, and a brief glimpse of Megan's current work-in-progress.
Q. What was the “seed,” the first glimmer of what became A Splendid Ruin? How did the that initial idea change as you wrote and revised?
During a conversation with my agent she mentioned that she’d never read a novel set during the Great San Francisco Earthquake. I told her that my sister had worked in San Francisco during the 1989 Loma Pieta earthquake, and lived in Oakland, so she traveled on the highway that collapsed. We didn’t hear from her for hours and didn’t know if she’d survived. She did, thankfully. She told me that during the quake, she kept thinking, “I’m going to die and it’s going to hurt.” It was such a powerful thought that it stayed with me all this time. My agent and I started brainstorming.

I’d also put together a list of my favorite topics, which you’ll see repeated in much of my work—art and inspiration and women’s power, or lack of it—and we threw all that into the hopper, but I was just spinning my wheels until I realized that this might be the perfect vehicle for something I’d always wanted to do: a take on Balzac’s Cousin Bette. Once I came up with that, and the horribly disagreeable Bette’s revenge on her equally disagreeable family, the whole thing finally came together. Obviously, I wanted a sympathetic heroine, but there is something compelling about Balzac’s completely cynical view of human nature, and I liked the thought of playing with it.
Read more »
Email ThisBlogThis!Share to TwitterShare to FacebookShare to Pinterest 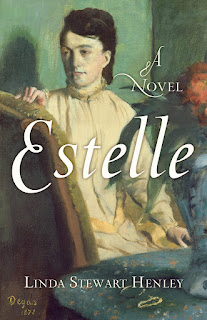 As a lifelong admirer of the art of Edgar Degas, I was intrigued to come across Linda Stewart Henley's novel Estelle, which is rooted in Degas' visit to his family in New Orleans during the 1870s. An American born in England, Henley moved to the United States with her family when she was sixteen and graduated from Newcomb College of Tulane University in New Orleans. After a career in university administration that took her to many parts of the country, she now lives in Washington State. When not sitting at her computer, she can be found painting wildflowers or tending her garden. Estelle, which appeared from She Writes Press, is her first novel, but a second is scheduled for publication in 2022. You can find out more about Linda and her work on her website and follow her on Facebook. Estelle is available for sale at locations including Amazon.com and Bookshop.org.
Q. What was the “seed,” the first glimmer of what became Estelle? How closely does the finished novel align with that initial vision?

As I was casting around for subject matter for my fiction writing class, I thought about New Orleans, a city that has held appeal for me since I attended college there. It would make a good setting. Thinking my memory might be unreliable, I bought a travel guide. I was surprised to find information about the Degas House, now a B&B, that was Degas’ family’s residence when he visited in 1872-73. I had not known about Degas’ five-month stay with his Creole relatives then, or about the home, and thought the story would be worth researching. I did remember Esplanade Avenue, the street where the house is located, and how the once grand neighborhood had declined when I saw it in 1970. After reading a number of books about Degas in New Orleans, I learned more about the family and the 19th century Creole lifestyle. I thought the story worth telling: Degas was not yet famous, and was at a turning point in his career. The story evolved differently from my original vision because of the dual timeline.
Read more »
Email ThisBlogThis!Share to TwitterShare to FacebookShare to Pinterest

THE SOCIETY INTERVIEWS: Julie Dobrow on AFTER EMILY 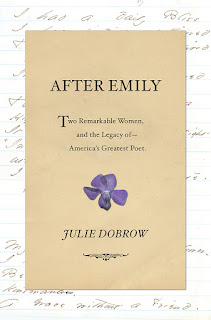 I'm so happy to be able to post this interview with Julie Dobrow, whose fascinating After Emily we reviewed earlier this year. Julie, who lives outside of Boston, is the Director of the Center for Interdisciplinary Studies at Tufts University, where she also holds faculty appointments in the Eliot-Pearson Department of Child Study and Human Development, the Film and Media Studies Program and the Civic Studies Program. A Senior Fellow in Civic Media at the Tisch College of Civic Life at Tufts, she's also a research associate at the Digital Wellness Lab at Harvard/Boston Children’s Hospital. After Emily: Two Remarkable Women and the Legacy of America’s Greatest Poet, published by W.W. Norton, was long-listed for a Pen/Bograd Award in biography, short-listed for the Plutarch Award in biography and the Massachusetts historical book award, named a finalist for the Julia Ward Howe award and received the “Conch shell” award from the Amherst Historical Society as well as being named one of the “best book club books” of the year. You can purchase After Emily on platforms including Amazon and Bookshop.org and find out more about Julie, After Emily, Mabel Loomis Todd and Millicent Todd Bingham at the author's website, which is rich with great background.
After Emily will also be the focus of our first So19 giveaway, which will appear on our Instagram on August 19 (of course!), 2021. Follow our fledgling account there or check back here on the blog to find out more about the goodies and how to enter to win them. No purchase required!
In the meantime, I'm pleased to share my chat with Julie about After Emily, its two extraordinary subjects, and her intriguing new work-in-progress among other subjects.

Q. You’re the director of the Tufts University Center for Interdisciplinary Studies and an expert on, among other things, journalism, mass communication, and the impact of media on children. What drew Mabel Loomis Todd and her daughter to your attention and prompted you to begin After Emily?
Read more »
Email ThisBlogThis!Share to TwitterShare to FacebookShare to Pinterest

THE SOCIETY REVIEWS: Norman Lock's TOOTH OF THE COVENANT 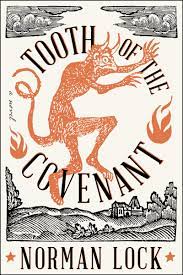 Comprised of linked but standalone novels, Norman Lock's American Novels series uses American literature as a lens through which to examine our national history, culture, character, ideals, and failures. To say that American Follies involves Susan B. Anthony and Elizabeth Cady Stanton, Feast Day of the Cannibals involves Herman Melville, and The Wreckage of Eden involves Emily Dickinson makes for an accurate statement that nevertheless fails utterly to convey the unfettered imagination and narrative energy that drives each novel. In the series' eighth novel, Tooth of the Covenant, Lock explores the weight of familial legacy, the intersection of individuals with their eras, and the power of storytelling. It begins in 1851 as Nathaniel Hawthorne sits in his Massachusetts farmhouse blaming his great-great-grandfather John Hathorne, an unrepentant participant in the Salem witch trials, for his own lifelong shame and melancholy. In the manuscript called Tooth of the Covenant that comprises most of Lock's novel, Hawthorne dispatches a fictional alter ego he names Isaac Page to wreak vengeance on the judge and cleanse the family name. Isaac uses a mysteriously powerful pair of John Hathorne’s spectacles to travel back to 1692 Salem, but his mission goes immediately awry. Plagued by eye pain and dreams of Satanic rites, he morphs from an enlightened rationalist to a man no less cruel and intemperate than the judge he has been sent to confront; in the end, both Isaac Page and his creator, Nathaniel Hawthorne, are the rueful recipients of some useful if sobering lessons. American cruelty and religious intolerance is of course a painfully grim subject, but Lock's clever voice, shapely prose and shrewd observations help lighten the story's mood, and the novel's look at intolerance couldn't be more timely. Tooth of the Covenant is available now on Amazon.com, Bookshop.org and other platforms.
Email ThisBlogThis!Share to TwitterShare to FacebookShare to Pinterest
Older Posts Home
Subscribe to: Posts (Atom)