So19 Interviews: JENNIFER ASHLEY on DEATH AT THE CRYSTAL PALACE 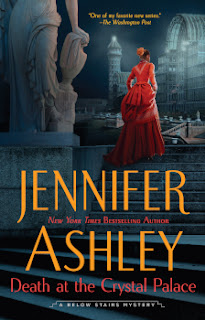 I'm delighted to share my interview with fiction author Jennifer Ashley, whose latest mystery novel features the reconstructed Crystal Palace in Sydenham, one of my favorite Victorian structures. Jennifer writes mysteries, romance, and historical fiction as Jennifer Ashley and Ashley Gardner, as well as a few series under the name Allyson James. Ashley, who has been published for approximately twenty years now, has written 115 or so novels and novellas. Find out more about Jennifer and her work on her website and her Facebook and Twitter feeds. Death at the Crystal Palace can be purchased on Amazon, Bookshop.org, and through your local independent bookstore. Many thanks to Jennifer for taking the time to speak with me; I hope you'll enjoy our chat!

Q. Before we dig into the Below Stairs series, talk to readers about your different authorial names, genres, and projects. You’re a real writing and publishing dynamo.

A. I have several historical mystery series going. As Ashley Gardner I write the Captain Lacey Regency Mysteries (1816-1820 and onward) and the Leonidas the Gladiator Mysteries (ca. Rome AD 63), and as Jennifer Ashley I write the Below Stairs Mysteries featuring cook Kat Holloway (1880s). As Jennifer I also write romance (historical, contemporary, and paranormal). I certainly do a lot of writing! I enjoy the current series, and I always have ideas for new ones—new characters, time periods, and situations.
Q. Where did the concept for the Below Stairs series come from, and how if at all did that initial conception change as you drafted the first novel, Death Below Stairs?

A. I conceived of Kat Holloway the cook/sleuth many years ago, long before I started writing the books. I realized that in many historical mysteries, the sleuth is from the upper classes (e.g., Peter Wimsey) is a prominent historical figure, or something of that nature. I have become much more interested in the “ordinary” person in history—the person I most likely would have been if I lived in that time. What did they do? How did they live?

I wanted to write about the people below stairs—their lives, hopes, problems, and ways of coping with the Victorian age. Servants knew everything that went on in a house, because they saw everything, heard everything, and knew all the secrets. What better person to solve mysteries?

I also note that in most historical mysteries, the upper class sleuth has a sidekick below stairs (in my Peter Wimsey example, his valet, Bunter). I decided to upend this idea, and have the below stairs person the sleuth, with her sidekick above stairs (Lady Cynthia and her friends).

It’s a challenge, of course, to have Kat leave the kitchen to detect, so I gave her a generous day and a half off a week as well as an assistant; plus, she gains many friends who help her investigate while she creates her wonderful meals. To me what I’m writing is no different than cozy mysteries with modern-day chefs investigating crime. They really don’t have time for it either!

Q. Let’s talk about the series’ female protagonist, Kat Holloway. Does her characterization build on any real-life models, or is she entirely invented? Why did you choose to make her a cook in particular?

A. I did not have a real-life model for Kat. She is wholly invented, but I did do research on people in service and how they lived. I enjoy cooking and baking myself, and I’m fascinated by old cookbooks, which is likely why I decided Kat would be a cook.

Perusing these cookbooks, I notice that for the most part the foods we eat now are much like what they ate in the Victorian age, or the Regency, or even the 18th century. We have a few ingredients that they did not, making cooking a little easier for us, but the food was basically the same. Chicken in bechamel sauce with green beans in the Victorian age is chicken in bechamel sauce with green beans now, made pretty much the same way. Their stoves were far less efficient (might take an hour to cook pasta!), but the ingredients and methods were similar when you remove all the verbiage from the cookbooks.

Q. The fact that Kat has a daughter who boards in another household makes her a richer character, and also feels true to the constraints on domestic servants of the period. So for me, this is a poignant element in the novels. Tell us a bit about this aspect of the stories.

A. I did want Kat to have more in her life than simply preparing meals in a Mayfair mansion. Her daughter, Grace, is her reason for living. When Kat realized she was going to be a single parent, she had to make the choice whether to keep Grace or give her up for adoption (e.g., at the Foundling Hospital). It was very difficult for women to raise children on their own. Kat knows that she has to work very hard to keep her daughter, and also that she can’t have Grace live with her since there was no at-work child care. Also, the mistresses of many houses wanted their servants (especially women) to be single and childless. Kat has an additional dilemma because she was tricked into a bigamous marriage, and her daughter is technically illegitimate. Because this fact could get her dismissed (she’d be accused of lowering the moral standards of the house), she can’t reveal the fact that she does have a daughter. Kat, however, has learned to deal with this situation and makes the best of it she can.

Q. Food shopping, choices, and preparation in an upscale Victorian household (not to mention kitchen and housecleaning, laundry, and more) can be so different from those familiar to most readers today. What sources do you use as information for those details in your novels? What do you think would surprise a modern reader most if they time-traveled to a Victorian kitchen?

A. Running a Victorian house was a big challenge, and so ladies of the day had guidebooks on how to do it (I’d certainly need one!). A prominent resource is Mrs. Beeton’s Book of Household Management. This book, published in the mid-19th century, outlines the duties of maids, cooks, and housekeepers, and advises a wife how to manage them all. What’s interesting about this book is that Mrs. Beeton’s husband ran a magazine, which she collaborated with him on and which published all kinds of tips on running a house and cooking. They’d ask for people to write in and contribute their favorite recipes, advice, and so forth. All of this was collected, along with Mrs. Beeton’s writings, into the Book of Household Management.

What would you find if you time-traveled to a Victorian kitchen? Heat. The kitchens were under the houses and had little ventilation. Food was kept cool (they’d try, anyway) in a larder, which was a smaller room away from the kitchen. Sometimes they’d have ice to help things, and later in the century, they had iceboxes (the precursors of our freezers). Cookstoves could be the lovely things we see in museums, or they could be tiny boxes that the cook had to use on her knees. I gave Kat a big new stove for her time, so she can cook without much hindrance. These cookstoves had to be constantly fed with fuel, and then banked for the night, because it was difficult to get the fire started again once it went out. A little boy of about 10, Charlie, works in Kat’s kitchen—his job is to keep the fire going all day, and also to do odd jobs when called for. This was common in Victorian homes.

It would also be dark in the kitchen. If you look at older homes in London, you’ll see small basement windows that look onto the street. These were the only source of natural light below stairs, and not all the rooms had windows. Also in London, the sun is not always shining! Candlelight was the most common source of illumination, and even after gaslight became prevalent not all households would extend the gaslight to the kitchen. Again, I let Kat live in a generous household, where there are gaslight sconces below stairs.

All in all, it was a challenge to prepare meals in a Victorian kitchen.

Q. Both in its original placement and after its reconstruction in Sydenham, the Crystal Palace is one of the era’s most iconic symbols. And as you make clear right from the opening scene in your new novel, it’s also a wonderfully colorful and eccentric space! For those who haven’t read it yet, could you offer a bit of a glimpse of the milieus and mysteries of Death at the Crystal Palace?

I have always been fascinated by the Crystal Palace, the huge glass and steel enclosure that housed the Great Exhibition of 1851. I couldn’t use the original Crystal Palace, because my story takes place in 1882, and the original palace had been dismantled once the exhibition was over (those living in mansions around Hyde Park wanted it gone). The rebuild in Sydenham is a saga in itself—the companies formed to move the Crystal Palace faced numerous obstacles and went bankrupt several times before the new palace was built and opened.

The new Crystal Palace was even bigger than the old, and the exhibitions highlighted great monuments of the world. That building burned down in 1936, but the park is still there, along with its life-size models of dinosaurs.

Kat encounters a woman at the Crystal Palace who claims she is being poisoned by an unknown member of her family, and Kat agrees to help her find out who it is and why. Some of the action takes place in a large house in Park Lane. This house would have been fairly modern for the time, its lavish carved wood paneling, wallpapers, carpets, and the immense silence of the place a contrast to the Georgian-era house where Kat works.

A second mystery in the book revolves around Daniel McAdam, a man who has become Kat’s romantic interest. He works with the police rounding up some of the most dangerous criminals of the day, and has been sent to see if an aristocrat has been secretly funding the group responsible for the Phoenix Park murders in Dublin (a real event that was quite brutal). Daniel eventually asks Kat for her help, and she journeys with him to a fine estate and gardens in Surrey.

I enjoy taking Kat all over London—as a member of the working class, she knows her way around areas like the East End and where she lived in the City, and as part of the staff in an elegant house, she knows Mayfair and its environs as well. I also have her go to the markets, in Covent Garden and elsewhere, to buy her wonderful food.

Q. What’s currently in progress on your desktop (whether physical or virtual)?

I am working on Kat Holloway Book 6, even as we speak. This book will delve more into Kat’s past (her marriage, what happened to her husband, her life growing up in Bow Lane) and also move Kat and Daniel relationship’s forward a bit.

I am also working on another romance in my Mackenzies series, and another mystery in my Captain Lacey mystery series I write as Ashley Gardner. I usually have two or more books going in various stages at once.