So19 Interviews: BOB KROLL on THE PUNISHING JOURNEY OF ARTHUR DELANEY 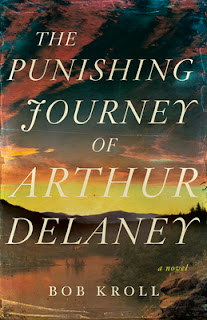 I’m pleased to share a chat with Bob Kroll, whose The Punishing Journey of Arthur Delaney appeared from ECW Press on June 7, 2022. Inspired by a little-known 19th century court case, the novel concerns a Canadian man who places his three children in an orphanage after the death of his wife. (Though it may surprise us today, this wasn’t an unusual decision for 19th- and even some 20th-century widowers without relatives or servants who could raise their families.) Delaney fights for the Union in America’s Civil War, spends three subsequent years incarcerated as a prisoner of war, and then works his way back to Canada. His mission now is to find his children, but both they and the orphanage are gone. Kroll’s narrative captures the complexity of family bonds and the challenges that confront us as we try to repair—or even just face—the mistakes we’ve made in the past. I loved the novel’s rich characters, haunting evocation of the Canadian landscape, and nuanced portrait of 19th-century life. You can check out The Punishing Journey of Arthur Delaney as well as Bob's other ECW titles on the press's website and buy the book through your local independent bookstore and platforms including Bookshop, Amazon US and Amazon Canada. With warm thanks to Bob for his time and ECW for its always-efficient coordination, here’s our conversation.

Q. You’ve written in many forms and genres over your decades as an author. Could you give readers some background on your career?

I studied history at Providence College and at the University of New Brunswick. I worked on farms and in the woods until embarking on a forty-year writing career. I cut my teeth writing television and radio ads, as well as history-based radio dramas for the Canadian Broadcasting Company. I wrote shipwreck documentaries for the Discovery Channel and docudramas for Canadian and American museums. I’ve published two anecdotal histories with Nimbus Publishing and three contemporary crime novels with ECW Press.

I realized years ago the one thing I could do reasonably well was write. For better or for worse, I stayed at it for a long time.

Q. What made you choose to write a historical novel set in the 19th century this time around? Did the process or the time period offer any surprises as you wrote?

Since I was in elementary school, the past has been my escape from time and space. My first adult book was a biography of Wyatt Earp. What people did in years gone by and how they did it has long intrigued me, so much so that in 1972 and 1973 I lived a 19th Century life in the woods outside Woodstock, New Brunswick. No electricity. No running water. Kerosene lamps and wood heat. It was all backbone and gristle. No surprise that all these years later I jumped at the opportunity to set a novel in the late 19th century. The additional research was pure joy.

Q. Halifax and Canada’s Maritime provinces are the settings for so much of your work. Could you talk a bit about that?

I arrived in the Maritimes in May, 1970, and, though I had a fellowship in the history department at the University of New Brunswick, spent the summer digging graves. I learned more from the old fellow I worked with than I did from four years as an undergraduate. The dead we buried had stories. Murdock took the time to learn them. As we sat on the edge of a grave, dangling our feet and eating lunch, he told me a lot of them.

The Maritime provinces have a quiet beauty about them. I never tired of canoeing the region’s lakes and rivers or hiking its woodlands. And I have not tired of the people I met here—gentle mostly, yet nail hard when they needed to be. Of course the ocean, vast and incomprehensible, has its own inspiration. The North Atlantic can get wild at times, throwing against the shore the worst of hurricane wind and crashing seas. Twenty or thirty foot swells. Sometimes fifty. Such uncontrolled majesty, suddenly quelled to flat calm, like a sleeping child. If that doesn’t churn the imagination, nothing will.

I love it here. I cannot help writing about these provinces and their people.

Q. Your Acknowledgments references Arthur Delaney’s court case, suggesting that he was a real person. How did you run across him?

In 1992, I was in the Archives of Nova Scotia researching court records from the 18th and 19th centuries when one of the archivists handed me a file and said I might find it interesting. That was my introduction to Arthur Delaney. His wife had died and he placed his three children in the care of an orphanage. When he realized the error of his ways, he tried to reclaim his children through the court only to discover, from a detectives’ report, they had been bonded out as farm hands and domestics and subsequently sold. Their whereabouts were unknown. What happened to Arthur Delaney? What happened to the children? These questions fired my imagination. After writing two or three chapters, I realized I was too immature to take this story into the emotional depths where it needed to go. Twenty years later, I picked up Delaney where I had left off. Details and circumstances changed, but the heart of the story beat loud and steady.

Q. From the moment he leaves his children at the orphanage, both Delaney and his children are subject to the decisions of Emma Golding, who runs the place with an iron hand. For me, she evoked what one might call the militant charity of the 19th century, in which help for and control of others become almost indistinguishable.

For me, Emma Golding comes right out of a Roman Catholic elementary school. Sour looking nuns with switches and leather straps and two foot long rulers that welted the backs of hands. Weeds and thistles. I picked them and shaped them into a character.

Q. Your depictions of places, weather and work are quite spare, yet also exceptionally specific and convincing. How do you build the physical world through which your characters move?

I try not to load up on description. It slows the forward progress of the story. Instead, I focus on the details that specifically define a location, or reflect a characteristic of an individual, one that is important to the telling. I try to put myself in a particular place within the time frame of the story. It helps that I have a lifetime of experiences to draw from.

My writing is spare. Nouns and verbs. The occasional adjective or adverb. Maybe I just don’t know a lot of words, or can’t remember them, or prefer to keep it simple and direct.

I have three story lines that I’m playing with: two set in the 19th century, one in the early 20th century. They are still vague and slippery. 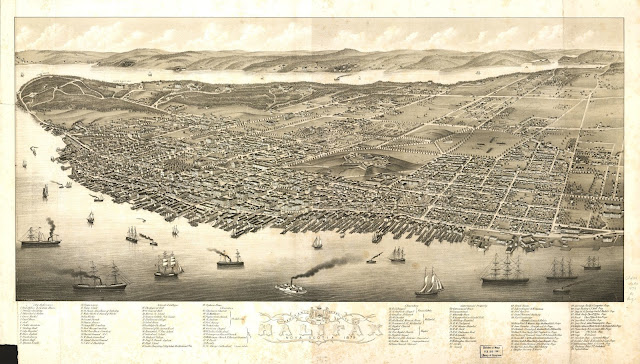 The  city of Halifax, Nova Scotia in 1879, by Albert Ruger,
panoramic map courtesy of Library of Congress
Email ThisBlogThis!Share to TwitterShare to FacebookShare to Pinterest
Newer Post Older Post Home