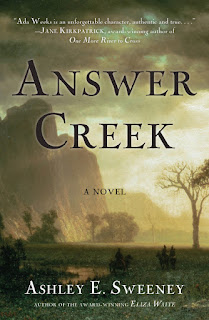 In the 19th century, the American West became a crossroads for individuals of many different backgrounds and with many different hopes. Imagining women who lived and journeyed there,  the fiction of Ashley E. Sweeney explores female courage and challenge as well as the remarkable places, eras, and episodes of history women helped shape. Sweeney is the winner of the 2020 Arizona Authors Association Award for Answer Creek and the 2017 Nancy Pearl Book Award for her debut novel, Eliza Waite. A native New Yorker, Sweeney is a graduate of Wheaton College in Norton, Mass. and resides in the Pacific Northwest and Tucson. She's at work on a third novel, set in rural Arizona Territory in the early 20th century, which is slated for release in Fall 2022. You can find her on Twitter, Facebook and Instagram and learn more about her and her books on her website. All that said, here's our chat.
Q. I’d actually like to start with your previous novel, Eliza Waite. It shares with Answer Creek a female protagonist who embarks on an uncertain journey in the hope of creating a new life. Could you tell readers a bit about that book, as well as why that theme resonates for you?

Writing women’s stories set in the American West has become my focus. But more important even than setting is the character’s voice. All of my protagonists are fictional, and I superimpose them in and on known historical eras and events. That is the platform where I can address injustice against women and spin a tale that’s familiar through a new, fresh voice. Eliza Waite is a struggling widow who pulls up stakes from a remote island in Washington State and heads to Skagway during the Klondike Gold Rush in 1898. Her grit and resolve are admirable. Because there are few historical novels set in the American West, I figure I have lifetimes of stories to draw from.
Q. What inspired you to write about the Western migration generally, and this particular moment and group, for this book?

In fourth grade, I read the biography of Narcissa Whitman, and you could say that Whitman became my first heroine (over time, I have had other heroines join her ranks including Amelia Earhart, Eleanor Roosevelt, Mother Theresa, and, more recently, Nancy Pelosi). As I write in the afterword of Answer Creek, I have long been enamored of the idea of women traveling across the country in the 19th century. When I decided to do an overland story (what author worth her salt doesn’t want to tackle the Oregon Trail diaspora?) I figured I would take on not only the migration story but also the most infamous of American migration stories, the ill-fated Donner Party. My goal was to expose their humanity and dig deeper into their motivations and decisions. I had no idea when I was writing that the novel would launch in the midst of a pandemic. If there ever was a story about hope in the most desperate of times, this is that novel.

Q. Though most of the book’s characters are historical figures, your protagonist, Ada Weeks, is a fictional character. Could you talk about your vision of her? How did you begin crafting her personality and backstory? How did either or both change as you drafted?

The muse for Ada Weeks’s character is my junior high school friend, Ann Thomas Aylesworth. She is a gutsy, gritty, courageous, and unapologetic force of human nature. She is also tall, thin, and leathery tan after years living and working in the sun. Picturing Ann as I was writing helped me create Ada’s physical and emotional character. I also consulted Ann along the way: What is she most afraid of? What keeps her up at night? What is she most regretful about? Some of these answers found their way into the novel. There is no doubt that Ada is a fictional character, but it helped to have a muse alongside as I was writing.

Q. J. R. Riddle, who takes part in the rescue of the stranded emigrants, is another remarkable fictional creation. Was he inspired by any of those who participated in the actual rescue efforts, such as John Stark, or drawn primarily from your own imagination?

Riddle is a three-dimensional character conjured from my imagination. He is strong like John Stark, yes, but wholly his own character. I love Riddle almost as much as Ada does. His history made me physically weep as I was writing. I could feel his vulnerability and pain. He and Ada are both wounded reeds, and I am so glad they found one another. If I were to write a prequel (which I am not planning to do), I would write Riddle’s story.

Q. Gender plays so richly into your story. You so clearly evoke the special vulnerability faced by the female emigrants, including childbirth and nursing. At the same time, the women—I’m thinking not just of Ada but also of Margaret Breen and Tamsen Donner—are in many ways the backbones of the groups.

Yes. In Answer Creek, themes of leadership, gender roles, race, and morality are viewed through the lens of history, with significant aberrations. Caught in the grip of 19th-century patriarchy, it’s not hard to climb into the heads of women traveling the Oregon-California Trail and feel their helplessness as men made all the decisions for their—and their children’s—lives. Day in and day out, women washed and cooked and cleaned and tended to children and were still expected to provide wifely duties at night. All without adequate food or shelter or clothing (and with no say in which direction they went or how long they traveled in a given day). In many ways, women, even married women, on the western trails were no more than maids and cooks and babysitters and bedmates. Domestic violence was prevalent and accepted. It makes me cringe to know our foremothers’ worth was so debased. That’s why Ada Weeks’s independence makes me cheer. I love her fiercely for that.

Q. Tell readers about your research and source material. What felt most useful?

I am indebted to Michael Wallis, who wrote The Best Land Under Heaven: The Donner Party in the Age of Manifest Destiny (Liveright, 2017). I used his fascinating narrative non-fictional account of the Donner Party as a Bible of sorts. I also read approximately 100 books, in addition to journals, newspaper stories, and extant material as I researched. The most useful research was traveling the length of the Oregon-California Trail last summer with my husband for a month. There is no substitute for standing on the exact place your characters stood and placing your creative spirit into their hands and heads.

Q. I loved your references, in the Acknowledgments, to traveling the trail that your characters followed (in much more comfortable fashion as you note). Could you talk a bit more about that journey and what you learned along the way?

This question could take up two or three blogs, but I’ll tell you about a few memorable experiences my husband and I had along our month-long research trip last summer. The most notable was an authentic wagon train ride we took outside of Casper, Wyoming. Led by two tough teenage cowgirls, we lurched along old wagon ruts for four hours in a reconstructed wagon and experienced a true cowboy supper cooked over a wood fire (as a vegetarian, I had beans, beans, and more beans). A second, and unforgettable, experience was off-road at the crest of the Continental Divide at South Pass, Wyoming (elevation 7,412 feet) where we stood at a spot untouched by humans since the overland travelers passed that way—no cell phone towers, no fences, no roads, no buildings. In geologic time, 1846 was a second ago, and I felt like I could have opened my eyes to see wagon trains lumbering by, hear oxen lowing and children chattering, and taste dust. What I did was feel the same warm wind whipping my hair; I wrote a scene about that in the novel. Another striking event was standing at the bottom of Donner Hill outside present-day Salt Lake City and being dumbstruck that oxen-pulled wagons could ever navigate that steep and high of a slope (but they did, by unloading wagons and triple-teaming wagons to mount and crest the mountain). And there are so many more stories!

Q. The book ends with a brief coda set in the present day. What drew you toward this closing shift in time?

Instead of leaving the reader hanging (or tying story up with a hasty epilogue), I thought I would look into Ada’s future to see how her legacy might be interpreted or even misunderstood. Aren’t there stories in every family that beg for answers? Or an ancestor you would give anything to spend an afternoon with? I like to think that the coda is not so much a dream sequence at the end of the novel as Ada reaching forward to speak to Emma and enlightening Emma about Ada’s humanity.

Q. What’s coming up for you next—do you have a new project in mind yet?

Talk about a hard left turn! During this COVID-19 lockdown, I’ve shifted my focus from my work in progress (already at 85,000 words) to a completely new idea. I’m a firm believer in looking for signs, and I’ve been pricked by several arrows pointing me in this new direction. As a result, I’m turning my emotional energy to Jericho, a tale of rural Arizona set in 1905—1907 and featuring a spunky heroine who’s the former star of a Wild West show and now the proprietor of a rough-and-ready roadhouse north of Tucson. I’m really excited about it, and have my work cut out for me as I’ve got a Fall 2022 contract for my next novel (which means it needs to be finished by Fall 2021). Hang on! 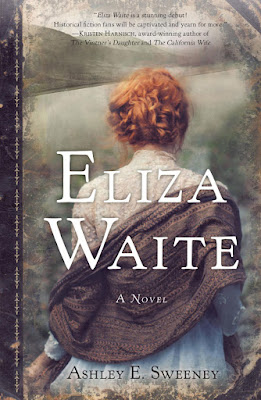