So19 talks with DIANA BRETHERICK 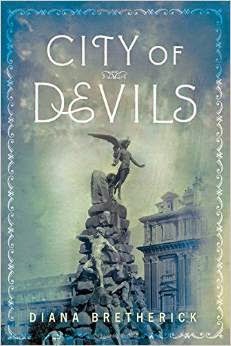 So19 is very pleased indeed to interview British author Diana Bretherick, whose atmospheric debut novel is City of Devils (Pegasus Books 2014). Winner of the UK’s Good Housekeeping prize for first novels, the book is a mystery set in 1887 Turin. At its heart is Cesare Lombroso, little known today but a celebrity in his own time for his theories about criminality (as well as his oversized personality). As Lombroso confronts a series of crimes purporting to be a tribute to his work, the reader not only follows a dramatic investigation but also listens in on a rich array of musings and debates about the causes of criminal propensity, the prevention of crime, the nature of evil, and the relationship between science and religion. Though Lombroso’s beliefs on some subjects are discredited today, Bretherick vividly conveys his historical place on the leading edge of forensic science. The author brings long experience to her writing about crime: formerly a criminal barrister, Bretherick now lectures in criminology and criminal justice at the University of Portsmouth. Find out more about Bretherick and her work on her Facebook page, Twitter stream and website.—Suzanne Fox

So19: You mention that the idea for the novel came from a student’s question in a seminar. Can you tell us more about that inspiration and how you developed the concept?


DB: It was one of those dark winter afternoons with the wind blowing and the rain pouring down outside. We were talking about how the study of crime started and Lombroso’s role in that. Attention was beginning to wander (the students’ that is, not mine!). Then somebody asked if Lombroso had ever been involved in investigating crimes. I had to confess that I didn’t know the answer. It isn’t something that textbooks tend to cover, but we started to talk about the possibility and how he might have gone about it. Afterwards the idea lodged itself in my head and the more I thought about it the more it fascinated me. I was about to start planning my final project for my Masters in Creative Writing so it seemed as if it was meant to be. I started to do some research and it all started to fall into place.

So19: Lombroso is at once brilliant and blind, prescient and pigheaded—you understandably call him “infuriating and endearing in equal measure.” What sources did you rely on most to develop your vision of him and create his character in the book?

DB: For the most part I relied on his own words. Two American scholars, Nicole Rafter and Mary Gibson, had just completed an excellent English translation of two of his books. From reading that and other books about his work I was able to get a real feel for how he approached things. The more I read, the more I could hear his voice in my head. Sometimes it was so strong that it felt as if he was in the room with me when I was writing.

So19: Your Author’s Notes suggest that Lombroso be “judged as a man of his time.” Could you talk more about that?

DB: I think one has to look at the mood of the late Victorian era to really understand what was going on. Lombroso’s ideas were influenced by the work of Charles Darwin, which had created something of an intellectual and cultural whirlwind at the time. Science was becoming a more dominant force and not everyone was comfortable with that viewpoint, particularly the Catholic Church in Italy.

Some of Lombroso’s views, particularly on women and race, sound extraordinary, perhaps at times even offensive to the modern ear. But he was reflecting how people tended to see things in those days, and I think it would be unfair to judge him as if he was writing now. Although his work has been discredited to some extent, this is not the whole picture. There is a current field of the study of crime called neuro-criminology which makes a link between physical characteristics of the human brain and criminal behavior. It isn’t quite the same as measuring skulls, but it has its origins in Lombroso’s view that some criminals are born rather than made and might therefore not be entirely culpable for their actions.

Lombroso was the first to bring academic and scientific discussion about the causes of crime to the attention of the wider world. That, I think, is his main achievement.

So19: James Murray, the main viewpoint character, is said to have worked with Dr. Joseph Bell, who is of course a historical figure. Is Murray himself inspired by a real personage, like Lombroso and his assistant Salvatore Ottolenghi? If not, how did you develop his character?

DB: James Murray is loosely based on Sherlock Holmes’s creator, Sir Arthur Conan Doyle. Murray won’t be writing any detective stories, but like Conan Doyle he is a medical doctor, trained by Bell (who makes a personal appearance in the sequel). They both had troubled family backgrounds; Conan Doyle’s father was an alcoholic. They also went to the same school, with Conan Doyle of course being his senior by two years. It is entirely possible that they might meet in a later book!

So19: The 19th century Turin you depict is a center of learning and science, yet it’s also a sort of crossroads for Satanists—not to mention a place with really scary statues and subterranean tunnels. Can you tell us about your research for the Turin of the period, and your visits there?

DB: I have been to Turin several times now, and every time I go I discover something else to inspire me. It really is a most extraordinary city, with many different aspects to explore. It is full of culture and there are some wonderful museums and art galleries. I often have story aspects in mind, so I will spend some time looking for good locations where, for example, a body might be found. I’ll also wander the streets drinking in the atmosphere and also the wine, which is excellent! Food plays quite a prominent role in City of Devils, so I have visited a number of cafés and restaurants to sample the local cuisine to ensure authenticity wherever possible. I know, I know: I suffer for my art!

So19: Despite the obvious differences, I felt similarities between the world of fledgling forensics you depict and that of our own time: the sense of being on the cutting edge, the excitement at the possibilities of technology, the vigorous debate about the rights and limits of science when it comes to keeping order. Fair reading, or has my brain been addled by too many television re-runs of Law & Order?

DB: Can there be too many re-runs of Law and Order? You are absolutely right. It was a time when the possibilities of using science to solve crime were really coming into their own and there are, as you say, many parallels to be seen between then and now. Interestingly, inspired by his time as Lombroso’s assistant, Salvatore Ottolenghi actually went on to found the first School for Scientific Policing in 1903—so “cutting edge” is a very good way of putting it.

So19: The opening of the book has a scene in what Lombroso calls his “little museum of criminal curiosities,” where the exhibits include death masks, pickled brains, and books bound in human skin. I believe the museum is open today—is it really as colorful and creepy as it sounds in the book?

DB: Yes, it is! The skulls, death masks, etc. were all on display, as well as a replica of Lombroso’s study. I would certainly recommend a visit. It is a fascinating place. Speaking of pickled brains, the museum used to display Lombroso’s head, pickled in a jar! Apparently he left instructions to that effect before his death. When I visited last it wasn’t there, and I confess I was a bit disappointed. I wanted to come face to face with him, as it were. Instead I had to content myself with his skeleton, which wasn’t quite the same!

So19: Can you tell us what you’re working on now? Another novel, we hope?

DB: Yes. I am currently working on the sequel to City of Devils called The Devil’s Daughters. Girls are going missing in Turin, strange lights have been seen at a reputedly haunted Abbey and then a body is found…[Editor’s Note: The Devil’s Daughters appears in August 2015 in the UK; publication date for the US edition is not yet firm.]