So19 Reads: Janice Hadlow's THE OTHER BENNET SISTER 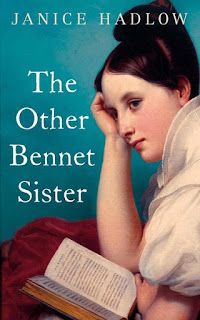 Appearing on March 31, Janice Hadlow's novel about Mary Bennet, the often-scorned and overlooked sister from Pride and Prejudice, is pure delight from start to finish. The Other Bennet Sister is a wonderful read, an impressive debut novel, a loving homage to Austen and her world both real and fictional, and a celebration of all of the myriad young women who fall outside of the “romance heroine” mold.

The novel’s voice captures Austen’s cadences and crispness without ever falling into pastiche; also like Austen, Hadlow is able to move seamlessly between comedy and pathos, irony and deep emotion. She gets both the details and the feelings of Austen’s world just right. But while this is certainly a book “Janeites” will love, its appeal is much wider than that—it’s a moving female coming of age tale even beyond the Austen connection, with a protagonist and a story that will resonate for many readers.

For anyone who has ever felt like the odd duck, the fifth wheel, the wallflower or the family disappointment, The Other Bennet Sisterwill have particular meaning. I’m one of those readers. Back in the day, I was a girl who had to wear glasses from the age of four on…felt like the oddball in an outgoing, physically attractive family…and retreated into reading and study both as a means of both hiding and survival. Though my story is nowhere near as stark as Mary Bennet’s—I am lucky enough to have been raised in a time, culture and family that offer women much wider options that she had and with an exponentially more supportive mother!—it took me many years to find myself, my calling and my “tribe.” Hadlow’s Mary Bennet resonated deeply for me, speaking authentically to the kind of search and stumbles I experienced. I’m confident that many others will feel the same.

In Hadlow’s novel, Mary’s glasses serve as a kind of symbol of how clearly we do, or don’t, see the world as well as ourselves. Mary earns every bit of the clear-sightedness she attains by book’s end, as well as the rewards that go with it. Kudos to Janice Hadlow for bringing her story—and with it the inner journey of so many readers—to such convincing life. You can pre-order the book on Amazon or, better yet, through your local indie bookstore.
Email ThisBlogThis!Share to TwitterShare to FacebookShare to Pinterest
Newer Post Older Post Home