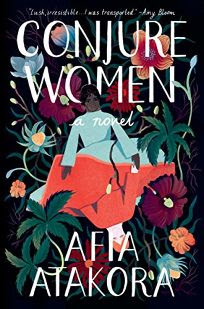 Among my favorite books this year is Afia Atakora's Conjure Women, which appears from Random House on April 7, 2020. The "conjure women" of the title are Miss May Belle and her daughter Rue, part of a female lineage that offers healing in the form of herbal cures and midwifery as well as the casting of spells. Eddying between "Slaverytime" and "Freedomtime" on the plantation on which the women live, the novel explores their relationship to each other, to "Marse Charles" and his daughter Varina, and to the others who reside on or pass through the plantation property; of the latter, an itinerant preacher known as Bruh Abel and an oddly pale infant with "oil-slicked black irises" who becomes known as "Black-eyed Bean" make unforgettable appearances. The dynamics of power, the impact of secrets, the changes of time and the clash of male and female spiritual traditions all play into the story, which is beautifully voiced and crafted. Read my review of the book here and pre-order your copy through Amazon.com or your local independent bookstore!
Email ThisBlogThis!Share to TwitterShare to FacebookShare to Pinterest
Newer Post Older Post Home