So19 Talks To MARYLA SZYMICZKOWA 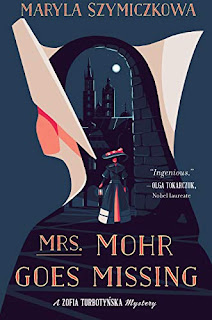 Given the rarity of such books in the U.S. market, I welcomed the chance to review a historical mystery set in Krakow for Publishers Weekly last year.  Even better, it was set in my beloved 19th century—1893, to be precise—and delightful from beginning to end. Mrs. Mohr Goes Missing was the first novel by Maryla Szymiczkowa, the pen name for Polish writers and partners Jacek Dehnel and Piotr Tarczyński. I was delighted to talk to the pair about the novel last year and am glad to post our interview now, delayed as it has been by my eye issues and that Covid thing (you might have heard of it). You can read my Publishers Weekly review here and my Q&A with the authors here. Though I didn't review it for PW, I'm glad to say that the duo's second mystery featuring, Karolina and the Torn Curtain, appeared in English last month. With warm thanks to Piotr and Jacek for speaking to me, here is our chat.
Q. What inspired you to write about 1893 Cracow?

Piotr: Historical mysteries are popular in Poland, but none took place in my hometown of Krakow. I found that surprising, given the fact that late 19th century Krakow was a place rich in history and full of interesting characters: a perfect setting for a historical mystery.

Jacek: That was a time when the old order, the Austro-Hungarian empire under the “eternal” rule of Franz Joseph—the Eastern European equivalent of the Victorian era— would soon start to crumble and then be toppled by the Great War. It's this quiet moment just before the storm.

Piotr: Just like today, when you think of it: we live in times of rapid technological progress, we’re seeing the rise of nationalism and anti-Semitism, and women and minorities are fighting for the right place in the society. The series describes 19th-century society, but we also want to say something about the present day.
Q. The book is set in 1893 Kraków.Which among the novel’s locations could a visitor see today—are there neighborhoods or areas in which the nineteenth-century city still exists in some way?

Piotr: Unlike many Polish cities, above all Warsaw, Kraków survived the WW2 unscathed. In the city center practically everything looks almost exactly like it did over a century ago. That's one of the things that bring tourists, of course, though for some inhabitants of this “land that time forgot” it can be quite annoying.

Q. As the book starts, Zofia Turbotyńska, your protagonist, has immense energy, but not much to do with it. So the book deals with the issue of gender and how it limits life choices, particularly in the nineteenth century. Could you tell readers who don’t yet know the series a bit about her and her situation?

Jacek: She is a wife of a university professor, a good and decent man, but not particularily brilliant or interesting. Naturally inquisitive, Zofia is much more intelligent than her husband. Today—or even twenty or thirty years after the novel is set—she would be a strong, independent professional. But in that period women couldn't attend the universities or have their own careers, so their role was basically limited to being wife and mother. Zofia, who doesn't have children, is not happy with that lack of choice.

Q. You’ve mentioned using the newspapers of the period during your research. What kinds of things do you look for? Has anything you’ve found surprised you?

Jacek: Too many authors writing about 19th century think it's basically our world, only people dress funny and they don't have computers. But those people in many respects were completely different from us. Of course, the basic human passions, as we know from Euripides or Shakespeare, are universal. Yet our everyday approach to many aspects of life changes significantly even within a decade.

Piotr: Old newspapers are extremely useful, because they basically show you the whole viewpoint of people in that age: what they knew about the world around them, what they were interested in. Importantly for authors of crime novels, they also how disappointing was the crime back then! Someone stole a dog, one worker killed another during a drunken fight etc. With its six or seven murders annually, late-19th century Kraków was hardly a town teeming with crime life.

Q. You’ve talked elsewhere about being inspired by Agatha Christie. What elements do you think you share with her work?

Jacek: We knew that we didn’t want to write another dark, bloody crime novel in the Scandinavian style that is now in fashion, but something different, where mystery is more important than shock. Something much closer to Agatha Christie than, let's say, Jo Nesbø.
Piotr: We don't really read a lot of crime novels, you see, so for us Christie, whose novels we read as kids, has still been the point of reference. Our novels are basically cozy crime mysteries, although we only learned of the genre and its name after we had written Mrs. Mohr Goes Missing.

Jacek: To start with, like Christie’s, our detective is not a policeperson. Solving mysteries is her hobby, not her job. Moreover, like Mrs Marple, she is a woman in a patriarchal society with all that implies. In some of the books of our series the story finishes with a classical Christie closing scene, where the detective solves the mystery, but also reveals other lies and shenanigans.

Q. Tell us about your writing process. How do you split up the responsibilities—are there fixed roles or is it a more organic process?

Piotr: Jacek is a professional writer with his own style, language, and also his own creative proces. He can write a whole book with a plan only in his mind. Two people can't do that, because even after fifteen years of marriage we are two separate beings with two different minds. So we had to find our own shared writing proces. Luckily, we managed to do it fairly quickly.

Jacek: Piotr does the research, and almost all of it is done first. Then we construct the plot together, in great detail. Only then, when we know exactly what happens in which chapter, do we sit down and write. In any given chapter there are two or three scenes. We decide which of us takes which scene and we write separately, although we go on to read and correct each other's texts, of course. And that's how we go: one chapter after another. I write more of the actual text, let's say 60 percent, but we both agree that the eventual effort is equal.

Q. The novel has such a witty and distinctive voice, something that is often lost in translation. The book was translated by Antonia Lloyd-Jones, a skillful translator of Polish-language books as well as an advocate for Polish writing generally. Can you tell us a bit about how the translation process worked?

Piotr: As a translator I don't like the expression “lost in translation." Every translation is an interpretation, so it accentuates one thing and neglects another. Even if something is indeed “lost,” a good translator compensates it with something else. Antonia is an excellent translator, probably the best Polish to English translator alive, so we are very lucky that she chose us as her authors.

Jacek: Antonia consults with us on a regular basis. She recommends adjustments here and there, we read the draft and offer our suggestions in return. If she really has to change something she always asks us first. We usually agree, because although we might know English rather well, the final text will not be ours, but hers.

Q. What’s next for Zofia—what does she tackle after this book?

Jacek: Antonia has just finished translation of the second novel, called Karolina and the Torn Curtain, which will be published by Oneworld in the UK this year. [Editor's note: as of March 23, 2021, the novel is available in the U.S. as well.] This is our favorite part of the series, to be honest: a little bit darker than Mrs. Mohr Goes Missing, it shows the less pleasant side of the Austro-Hungarian Empire.

Piotr: And at the same time we are working on the fourth book, which should be published (in Polish, obviously) this year in the fall. And this one—believe it or not—is a crime and spy novel. 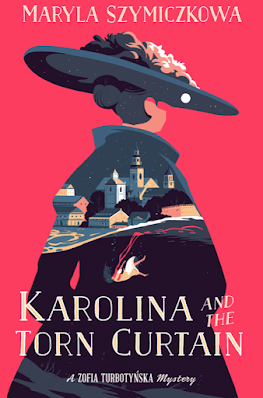