So19 talks with CHRISTINE TRENT 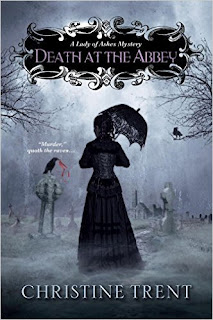 No one did mourning quite like the Victorians. From the plumes on the horses that bore the casket carriage to the special black, non-lustrous crape to the gorgeously intricate jewelry made from the hair of the deceased, they created entire catalogs of mourning goods and accessories and married those to an equally large and intricate array of rituals and requirements. Christine Trent transforms this fascinating historical material into intriguing mystery fiction in her Lady of Ashes series featuring undertaker Violet Harper. Violet’s unusual job gives her access to the households of the rich and famous, including that of Queen Victoria herself; of course, it also puts her in touch—literally—with myriad dead bodies, some of which have gotten that way in mysterious circumstances. Though the mourning customs Trent chronicles have long fallen out of fashion, Violet herself will be recognizable as a forerunner of modern working women, her husband Sam as an entrepreneur of the kind still introducing innovative businesses and products today. Trent published three historical novels set in earlier time periods before entering the world of the Victorians. Beginning with 2013’s Lady of Ashes, her Violet Harper books enjoy their fifth installment with Death at the Abbey, (published yesterday by Kensington Books). For more information on Christine and her work, visit her website and Facebook page. Society Nineteen is delighted to speak with Christine Trent about murder, eccentricity, and ravens in an interview that seems perfectly timed for the days before Halloween. — SF

So19: Let’s go back to the inception of the Lady of Ashes series, for readers not yet familiar with it. How did you decide to base a mystery series on a Victorian female undertaker? Had you already been interested in Victorian funeral and mourning customs, for example? What did you feel that this premise might allow you to do than another might not?

CT: Actually, the premise for this series came as a suggestion from a writer friend, Mary Oldham. We were at a writing conference together, and I was brainstorming a book idea to complete the contract I had with my publisher. She said, “You know what I’ve always wanted to read about? A Victorian undertaker. You should write that book.”

After getting over my initial shock of the idea (an undertaker? Someone who is physically handling dead bodies? Really?), I realized it was very unique. I couldn’t find anyone that had written a Victorian historical from the perspective of someone who takes care of the dead. So the only credit I can claim is for running with someone else’s great idea.

So19: The stories describes the details undertaking processes as well as the huge variety of the goods, from jewelry to dresses to glass caskets and more, that the era’s elaborate mourning rituals necessitated.  Have you been tempted (as I surely would!) to collect any of these types of artifacts? (Jewelry or garments, I mean, not glass caskets!)

CT: I am very blessed in that I have a really great readership that includes people who are fascinated with Victoriana.  Readers have gifted me with items such as handmade mourning bracelets, mourning ribbons, and tear catchers.  I have collected a few items on my own, such as a mourning hair pin, and an old photo of a woman in mourning.  One reader came to a book signing and showed me an antique coffin salesman’s sample she owned.  Fascinating!

As I collect these items, I use them in book club presentations I do on Victorian funerals.  People love to touch actual remnants of history.

So19: The Lady of Ashes stories often feature historical figures, and one of the most prominent this time around illustrates the adage that truth is stranger than fiction. Before going into his personality, let me ask how and where you came across William John Cavendish-Scott-Bentinck, the Fifth Duke of Portland?

CT: It would seem that I get my best ideas from my friends.  Another friend, Carolyn McHugh, one day sent me the link to an article about the duke.  She thought I might be interested in him because he lived in my writing time period.  As soon as I encountered him, I knew I had to use him in a book.  Little did I realize that he would soon overtake that book.

You are correct that truth is often stranger than fiction.  It’s why I rarely have to make up anything when it comes to the historical characters in my novels!

So19: From his personal paradoxes to his hugely weird and ambitious underground building schemes, the Duke is just fascinating. I was especially intrigued by his hugely ambitious below-ground building program at Welbeck Abbey, which included tunnels that apparently allowed horses and carriages to travel unseen for miles. Could you talk about the Duke, his personality, and his projects a bit?

CT: I’m glad you found the duke as fascinating as I did.  His estate, Welbeck Abbey, still exists, but only a few of its rooms can be visited, on only a few days of the year.  I’ve done some mapping, and I can find traces of the tunnel domes, as well as a few of the tunnel exits.  As to whether they are still usable or are just crumbling, I couldn’t say.  However, yes, he was one of the largest employers in the area, gave each of his men a donkey and an umbrella so they could always make it to work, and was known to never turn away anyone seeking employment.  I imagine his generosity was what made people love him despite all of his eccentricities.

And, yes, he loved the smell of roasting chicken.  What I don’t share in the book is that he had an elaborate pulley system in his home, which enabled servants to put chickens (and other meals) on rolling trolleys to reach him wherever he was, so that he could eat without interacting with anyone.

So19: This book opens with the notion of ravens as omens and closes on All Hallow’s Eve, but in a sense, it’s as much about science as superstition. Notably, Violet’s husband Sam is working with Alfred Nobel to spread the word about the benefits of dynamite, which was patented only two years before the action in this book begins and still regarded with suspicion. What inspired this thread of the stories?

CT: I think every generation relies on both science and superstition, and the two are not mutually exclusive.  Sometimes science relies on a weak link of facts, and sometimes what we view as superstition is grounded in reality.

That said, I started the Nobel thread—another historical person I was excited to find lived in my writing timeframe—back in Stolen Remains, the second book in the series, and this was just a continuation of Sam’s work with him.  Nobel had a very difficult time getting dynamite accepted as a safer way to tunnel out mines and roads, particularly in England.  Ironic, really, given the number of mines and roads in the country!

So19: Speaking of innovations, there are some tantalizing references to Violet and Sam journeying to the opening of the Suez Canal. Will that feature in the next book, by any chance?

CT: You’ve got me.  Yes, Violet and Sam are off to the Suez Canal next.  I knew next to nothing about the building of the canal when I encountered it in my research of 1869 events.  However, the political intrigues surrounding it fascinated me once I began looking into it.  You can be sure that Violet will be caught up in these intrigues, and that there will be a dead body or two along the way!

After the Suez Canal, Violet and Sam are stopping off in Pompeii for some much needed rest and relaxation on their way back to London.  Of course, it’s not possible for Violet to be on holiday and not encounter death and mayhem, is it?