THE SOCIETY INTERVIEWS: Patricia Marcantonio on the FELICITY CARROL MYSTERIES 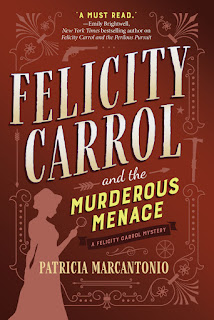 It's tremendous fun to interview Patricia Marcantonio, an author who creates rich, absorbing works that span many forms, time periods, and themes, about her Victorian mystery novels Felicity Carrol and the Perilous Pursuit and Felicity Carrol and the Murderous Menance. The art of storytelling links her diverse output. As her website's biography page notes, "Patricia Santos Marcantonio comes from a family of storytellers. They tell stories about their own past and traditions, tales about people they have met and things they have done, and all in a way that makes you want to keep listening and beg for more. That’s where she got her desire to write and tell stories of her own." A member of the Dramatists' Guild of America, Patricia is award-winning journalist who has served as a Newspaper Association of America New Media Fellow. Her children’s book, Red Ridin’ in the Hood and Other Cuentos, won an Anne Izard Storyteller’s Choice Award and a starred review from the American Library Association among other recognition. With Bonnie Dodge, Patricia co-authored Voices From the Snake River Plain, contributed to and edited Hauntings From the Snake River Plain, and co-wrote Billie Neville Takes a Leap. Her screenplays have won high placement in several contests, including MORE Women in Film, Screenwriting Expo 5, Women in Film Las Vegas, the Phoenix Film Festival contest, Reel Women of the West, and Cinestory and took first place in the Willamette Writers Kay Snow and Idaho Writers Guild Rendezvous Screenplay contests. For more about Patricia and her work, visit her author website and follow her on Twitter. Patricia's Felicity Carrol books can be purchased through Amazon.com and Bookshop.org among other platforms. All that said, here's our chat!
Q. How did Felicity Carrol, her world and her stories first appear in your mind—what was the first seed or glimmer? How did that initial idea change or deepen as you wrote?

I heard the term steampunk at a writers’ workshop, and thought, hey, this might be a challenge (and fun) to write a story harkening to that genre. Although the Felicity Carrol books probably aren’t true steampunk, the seed was planted to write a mystery set during the Victorian era, but with a spunky female ahead of her time. That’s how Felicity Carrol was born.

Her character really drove the piece. I wanted a woman who was brave, intelligent and with drive, but still damaged in her own way. Felicity had issues with her father’s neglect but still wanted him to notice her. She replaced her father’s love with the pursuit of knowledge. While solving a murder, she would have to deal with those personal demons, so to speak, as well as the villain in the story.
Despite all her book learning, she is very naïve in the ways of the world. So she had to grow as a person during the story. She even messes up, but she’s not afraid to admit it. She also develops a fierce determination to see justice done. I love Felicity because she is strong andvulnerable.

Q. Let's talk about the series' 19th-century timeframe for a moment. What drew you to that period and more specifically to 1887, the year in which the series begins?

I was drawn to that period for several reasons. As I mentioned, I became fascinated with the whole steampunk setting. I really liked the idea of setting the story during that time because of how women were treated and viewed in Victorian England. Mostly, society saw them as wives, mothers, workers or prostitutes. And boom, into that setting I place Felicity Carrol, who is brilliant and can’t see herself as a wife. She goes to university when most women didn’t. She wants to form her own existence, and that created an inherent conflict right there—even without a murder to solve.

That period of the 1800s is also fascinating because of the many inventions during that time—from the typewriter to the ballpoint pen to the dishwasher. Many of those I incorporated in the story to show how Felicity embraced the new discoveries. So I liked the push and pull of past versus the future. That time in history was so valuable to the story because science was pushing at the boundaries of society.And because the second novel in the series dealt with Jack the Ripper, I also placed the book during the late 1880s.

Q. Then as now, forensic techniques draw from an era's cutting-edge science. Could you tell readers unfamiliar with the series a bit about the investigatory process and tools Felicity encounters as well as the qualities that make her a good sleuth?

One of Felicity’s talents is to remember everything she’s read. So when the murder of her mentor sparks her investigation, she turns to what she knows—reading and researching. She reads everything she can about how to solve a murder, such as penny magazines about crime, to learn about police investigation techniques. She also taps the burgeoning forensic sciences field, which appeals to the scientist in her, such as the use of fingerprinting and handwriting analysis, and even forensic psychology. Since she studied medicine at the university, she already had knowledge of the human body, but also reads up about how a body can be damaged by violence. Because she has a thirst for knowledge, these new techniques are right up her alley. Of course, law enforcement—Scotland Yard in the first book and a Montana sheriff in the second—very much doubts these new ideas of forensic science.

Q. The history of the 19th century is dotted with real figures who shared Felicity's fascination with all things scientific. Was her character inspired by any particular woman from the period? If not, what stories (real or fictional) or other sources did you use to shape her personality?

No particular woman inspired me, but I kept thinking about how it would be for a strong intelligent woman to live within such boundaries and how she could break them. She had to reside within society, but also had to push at it where she could. I made Felicity wealthy, so that brings her a lot of freedom. But often she remarks about the lot of other women who didn’t have her money or freedom, such as it was.

That’s a great compliment—that the first book felt very British. It means that I did my job!

In the followup, Felicity Carrol and the Murderous Menace, I wanted to do a story about the possibility of Jack the Ripper terrorizing another country, since he was never caught. What better place than in a Montana mining town with a huge red light district? I made up a fictional town but really patterned it after Butte, Montana, which was a big mining town in the 1880s. Enter Felicity, who is truly a fish out of water there.

For research, I found a great book by Vardis Fisher, Gold Rushes and Mining Camps of the Early American West, which was invaluable. So not only did I research a lot about Victorian England, but also the Old West.

Q. You've written so richly and imaginatively about Latino experience. How does that work connect to the Felicity Carrol novels—what themes and interests run through both, do you think, even if they present quite differently?

A lot of my writing does involve Latino characters and culture. So readers may be thinking, what has this to do with a rebellious, wealthy, brilliant young woman in Victorian England?

But they are connected. I like to write about outsiders looking in on society and how they deal with that. For example, my courtroom drama Verdict in the Desert is steeped in Latino culture and characters. The protagonist is not Latino but an alcoholic lawyer who falls in love with the Mexican-American interpreter while he defends a Mexican woman who killed her husband in 1959. The attorney always felt like an outsider because life came too easy. And the interpreter felt like an outsider among her community because she had moved away to college and came home.

So that, like the Felicity Carrol books, is about an outsider dealing with society. Felicity is the ultimate outsider, not only to her father, who wishes she would just get married, but to Victorian society, which believes her true value is as a mother and wife.

Q. You tell your stories in many different forms: these novels, screenplays, graphic novels and more. How did your experience with other forms of storytelling inform and assist you as you crafted historical mysteries? Were there aspects of mystery plotting in particular that surprised you?

I do write stories in many forms and genres. I know writing experts will often advise “stick to one genre,” but I consider myself as a storyteller. And the story will sometimes dictate what form and genre it takes.

I’ve always plotted out my novels, but with mysteries I learned that the outlining had to be even more involved to address the red herrings, false leads and ultimately, the leaving of clues to solve the mystery. I think it’s made me a better outliner. That was surprising and welcome.

A new mystery! I’m also working on a book about two vampires who’ve been adversaries for eons. I’ve never written a vampire book before so it should be fun and challenging. 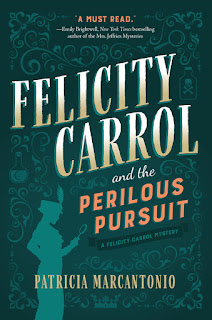