This late summer and fall will see the publication of a bevy of nonfiction books of interest to those drawn to 19th-century events and experience. Herewith, a handful of previews of particularly appealing titles.

The skillful melding of medical and cultural history in Neil Bradbury’s engrossing A Taste for Poison: Eleven Deadly Molecules and the Killers Who Used Them will appeal to lovers of history, mystery, and true crime. The author’s detailed accounts of how eleven historically significant poisons work appear along with accounts of how, when and why these deadly substances were used in cases both well- and little-known. A Taste for Poison doesn't limit itself to the 19th century, but it illuminates that and a number of other eras beautifully. Of special interest to those with an interest in mystery, true crime, science—and plain old human flaws.
(St. Martin’s Press, 10/19/21)

Though the event referenced in the title of Jared Ross Hardesty’s Mutiny on the Rising Sun: A Tragic Tale of Slavery, Smuggling and Chocolate took place in 1743, fifty years too early to fit within So19’s usual purview, the book is both so interesting and so relevant to 19th-century history that I can’t resist including it here. Hardesty captures the drama of the mutiny and its aftermath but also provides a convincing and meticulously-documented exploration of the complex human as well as economic forces that drove it.
(NYU Press, 10/19/21) 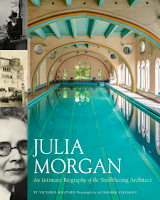 Victoria Kastner’s Julia Morgan: An Intimate Biography of the Trailblazing Architect traces the life of the extraordinary woman who created William Randolph Hearst’s legendary “castle” near San Simeon, California, among other influential designs. Morgan’s character, challenges, and creative vision come vividly alive in Kastner’s hands, as do the complex, fast-changing times in which she lived. If you're a lover of architecture, design, California or the trajectories of accomplished women's lives, this rich biography will fascinate and inspire you.
(Chronicle, 10/19/21)

Andrea Kayne’s Kicking Ass in a Corset uses the work of Jane Austen to identify six qualities that can help female organizational leaders survive, thrive and make change today. What could be a cute but silly concept in other hands achieves genuine depth and impact here thanks to Kayne’s expertise in gender and leadership issues as well as her understanding of Austen’s emotional and social landscapes. While the novels of "The Great Jane" yield the book’s framework, detailed discussions of contemporary leaders, institutions and strategies make it both timely and useful.
(University of Iowa Press, 9/15/21)

Poet and nonfiction writer Molly Peacock offers a rich and thought-provoking exploration of 19th-century artist Mary Hiester Reid in Flower Diary: In Which Mary Hiester Reid Paints, Travels, Marries and Opens a Door. As she did in The Paper Garden, her wonderful book on the botanical artist Mary Delany, Peacock skillfully melds personal musings on the lives of creative women with her look at a historical life. Among other things, Flower Diary is insightful about the ways women had (and have) to juggle multiple roles and responsibilities to make time for a serious creative practice.
(ECW Books, 9/14/21)

Well-known for his blockbuster historical fiction, Matthew Pearl offers a strong nonfiction title in this dramatic and well-crafted account of the 1776 kidnapping of Daniel Boone’s daughter by a Cherokee-Shawnee raiding party and its aftermath. In addition to describing the events that preceded and followed the abduction, Pearl writes about the clashes of attitudes and cultures that led to them. In both fiction and nonfiction, Pearl is a gifted and energetic storyteller.  The Taking of Jemima Boone is a compelling if heartbreaking tale.
(Harper, 10/5/21)

In her gripping The Gilded Edge: Two Audacious Women and the Cyanide Love Triangle That Shook America, Catherine Prendergast uses the love triangle of poet Nora May French, author and real estate developer George Sterling and Sterling’s wife Carrie Sterling—a relationship tangle that ultimately ended in three suicides—to explore (among other things) the way female aspirations collided with gender and class constraints in early 20th-century America. Prendergast’s compelling and meticulously researched account speaks insightfully to the complex social landscape of the Gilded Age as well as to attitudes and conflicts that still persist today.
(Dutton, 10/5/21)

Appearing a hundred years after two British men became the first Westerners to set foot on Mount Everest, Craig Storti’s The Hunt for Mount Everest offers a rich and colorful history of earlier attempts to understand, assess and reach the fabled pinnacle. The characters and episodes he chronicles are dramatic enough to fill several novels, while his professional background in intercultural communication helps ground his depictions in a nuanced understanding of the always complex and sometimes destructive ways in which Western ambitions intersected with non-Western lands and cultures.
(American edition, Nicholas Brealy US, 10/5/21)

And a slightly out-of-period bonus: Marrying text by Maureen Johnson and illustrations by Jay Cooper, Your Guide to Not Getting Murdered in a Quaint English Village is a charming acknowledgement of an odd and inexplicable truth: if fiction is any guide, the British village is a curiously deadly place. This one isn’t related to the 19th century per se, but no lesser a figure than Sherlock H. offers the epigraph and the book’s discussions of village institutions and customs describe centuries of small-town tradition. Several Miss Marple devotees among my friends and colleagues will be getting this one for Christmas. (Clarkson Potter/Ten Speed, 9/14/21)