THE SOCIETY REVIEWS: John Tresch's THE REASON FOR THE DARKNESS OF THE NIGHT 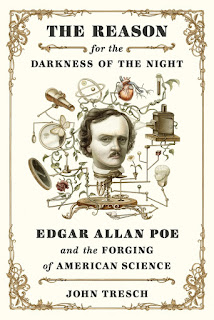 Exploring the influence of the sciences on the life and work of Edgar Allan Poe, Tresch’s brilliant biography helps combat misperceptions of the author as little more than a gifted but tortured Goth and offers an intriguing portrait of the American scientific landscape during his short lifetime. The Reason for the Darkness of the Night: Edgar Allan Poe and the Forging of American Science appears today (6/15/21) from Farrar, Straus and Giroux.
Poe excelled at “Astronomy, Conic Sections, Algebra, Fluxions, [and] Mechanics” at the Richmond Academy, studied mathematics and engineering while a cadet at West Point, and gravitated to Philadelphia, then a leading center of American scientific research and discourse, in his thirties. He wrote a poem inspired by the discovery of a supernova and produced an accessible edition of Thomas Wyatt’s Manual of Conchology; adapted from what he erroneously hoped would be a career-regenerating lecture, his Eureka: An Essay on the Material and Spiritual Universe is dedicated to the German naturalist Alexander von Humboldt and contains several prescient scientific intuitions amid its factual blunders. Tresch does full justice to the better-known aspects of Poe’s biography, including his imaginative gifts, fluctuating fortunes, difficult personal life and troubled psyche. But by shining a light on his often overlooked fascination with ideas, particularly those related to the truths behind the universe’s wonders, he offers a fresh and to my mind fascinating way to understand this familiar figure.

Though many today perceive science as a dry and dispassionate discipline, it felt anything but clinical in Poe’s time. Tresch’s vivid descriptions of its claims and controversies, advances and altercations—not to mention the bravura showmanship with which many discoveries were either presented or debunked—make clear why a mind like Poe’s might find it endlessly fascinating. As the subtitle’s reference to the forging of American science suggests, this was an era during which the scientific norms we take for granted were only just being established. For the moment, however, it was a world that could be as flamboyant as the circus and as unpoliced as the Wild West. As Tresch writes,

The senses of Poe and his contemporaries were bombarded with new effects: electromagnetic signals, brilliant light shows, clattering city streets, mesmeric emanations, machine-printed words. They were also confronted with new methods and theories for analyzing the universe, curing illness, justifying political decisions, organizing society, and shaping minds. Today’s image of science is one of laboratories, microscopes, and white coats: a regulated and uniform undertaking, heavily funded by government and recognized as the best—indeed, for some, the only—means of obtaining reliable knowledge about the world. Yet when Poe embarked on his career in the 1830s, this image of science was at best a distant dream….In the popular press and lecture halls, self-appointed experts announced dubious observations and flamboyant theories on every topic. No sufficiently powerful authorities existed—whether scientific associations, national academies, or peer-reviewed journals—to separate reliable claims from errors or outright fraud.

Tresch is equally skillful at discussing some of the scientific issues that inform Poe’s literary output. Like Mary Shelley’s Frankenstein, Poe’s work used tropes of the macabre, the sensational and the Gothic to tease out philosophical and scientific questions. The relationship between matter and energy or spirit; the nature of death; galvanism; time travel; the uses of intuition and ratiocination in apprehending truth; the tension between the verifiable and the illusory or deceptive; the influence of emotion, experience and psychic states on perceptions of reality as well as on notions of justice: from specific topics to broad queries, Poe’s best work probes many of the most urgent intellectual preoccupations of his day and ours.

While biographies are customarily understood as providing information, I think their ability to awaken curiosity is an equally if not perhaps more important measure of their value. Raising fresh questions as well as answering familiar ones, a good biographer grinds and polishes a lens through which we can see a particular life and body of work anew, making us want to look again and more closely. John Tresch’s The Reason for the Darkness of the Nightis a really satisfying book. However paradoxically, the fact that it also left me hungry is part of its power. For the first time since working my way (rather resentfully) through his stories and poems in college, I’m eager to revisit Poe’s work: to peer at it through the gleaming lens Tresch presents, and see what new wonders I discover. 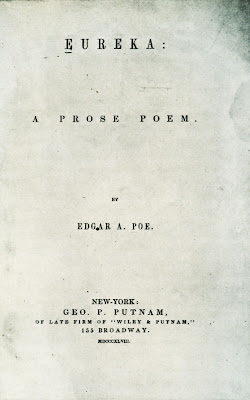