THE SOCIETY INTERVIEWS: Angela Buckley on AMELIA DYER AND THE BABY FARM MURDERS 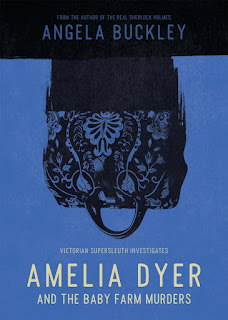 I'm delighted to welcome back Angela Buckley for her second interview on So19. We first chatted with "the Victorian Super-Sleuth" about The Real Sherlock Holmes, her biography of detective Jerome Caminada. Since that time, she's been busy on new and fascinating projects. Our talk today focuses on Amelia Dyer and the Baby Farm Murders, her study of one of Britain's most prolific serial killers; our next dialogue will catch up on her other recent books and endeavors.
Formerly head of modern languages in a large comprehensive school, Buckley has lectured at King’s College London and Oxford Brookes University in languages education and published several books for GCSE French students. She's now returned to Oxford Brookes University as associate lecturer in history, while studying for a PhD. Reflecting the interest in 19th-century crime behind her "Supersleuth" soubriquet, Buckley is currently writing a thesis entitled The Science of Sleuthing: The Evolution of Detective Practice in English Regional Cities, 1838 – 1914. Angela's work has appeared in publications including The Times and The Telegraph, and she's a popular speaker who can be heard on radio, television, and at conferences and events. Check out her website and blog and visit her Facebook, Twitter, and Instagram pages for more information on her work. All that said, welcome back, Angela! Let's get chatting!
Q. For readers not familiar with the practice, could you talk a bit about Victorian “baby farming”? Who used that service, and why?
Baby farming was a form of Victorian childcare, which women used to look after their children whilst they were working in the factories and mills, etc. These services were also used by single mothers, who were forced to give up their children due to the social stigma attached to illegitimacy. As these desperate mothers were often abandoned by their family, thrown out of their job and shunned by society, one of their few options was to have their child fostered or adopted by a baby farmer.

Baby farmers, who were usually women, offered to foster or adopt children for a fee, through advertisements in local newspapers. The average weekly charge was five shillings, and a one-off payment for an adoption could amount to as much as £10, which was almost a female domestic servant’s entire annual wage. Although some baby farmers were decent, honest individuals, the reality was that many “nurse children” were neglected and left to starve. It was common practice for baby farmers (and for parents!) to use gin or opiates, such as Godfrey’s Cordial, to suppress a child’s appetite and keep them quiet. These infant deaths would be treated as natural, attributed to “marasmus” (wasting away), which went unnoticed due to the high infant mortality rate in the Victorian era. Many baby farmers operated in networks with intermediaries each taking a cut, in what was essentially human trafficking.

Q. What led women or couples to take in others’ children rather than to earn their incomes in other ways?

The practice was completely unregulated for most of the nineteenth century, so it was easy to set up and run a baby farm. There was no official paperwork and parents who gave their children to baby farmers for adoption did not generally expect to hear any more about them or their fate. Baby farms were run at home and practitioners were free to manage the children as they wished. This would have been a much more bearable working life for many women as it gave them freedom; they didn’t need to answer to anyone, nor did they have to abide by any employment rules. It was also very lucrative.

Q. When did you first encounter Amelia Dyer? She’s so complex and fascinating that I can’t actually imagine notwanting to write about her—but that said, was there anything particular in her story that gave you those “I mustwrite about this!” goosebumps?

I came across Dyer almost by accident. Twenty years ago, I moved into the leafy suburb of Caversham near Reading, and I used to take my children down to the river Thames for walks and picnics. I never imagined that the place had such a dark history. At the time I was mostly writing about urban crime, such as the Victorian underworld of my home city of Manchester, when I suddenly had the idea to see if there were any interesting stories from my local environment. I was totally shocked to discover that one of the most prolific serial killers in British crime history had been arrested in 1896 very close to where I live. Although I know the case in detail now, I still get goosebumps every time I go down to the river and walk along its shady paths.

Q. Aberrant as some of her actions obviously were, your book also describes ways in which Dyer’s life and choices weren’t unusual for women of her era and class. They faced both a lot of challenges and a lot of constraints. How do you think that Dyer reflects more typical women’s lives?

I’ve recently been exploring this issue and researching the lives and background of other high-profile Victorian baby farmers, and there are some interesting links with Amelia Dyer. The women who practised this trade were often more educated than you would expect. Dyer herself came from a lower middle-class background; her father was a master shoemaker, and she and her siblings were all educated to a basic level. Dyer was also a trained nurse who had worked at Bristol Lunatic Asylum. Although she was married twice, she seemed to be very independent of her husbands.
Perhaps Dyer, and women like her, had reached a limit as to what they could achieve through a general education and basic qualifications which, although it would have been better than many other women at the time, would still have left them with few options for well-paid work—most professions would have been out of their reach. They would also have been used to a slightly better lifestyle and income than working class women and may have wanted to improve their prospects. Baby farming enabled them to do that, at least financially.

Q. In reading your book, I was reminded several times of Andrea Yates. Obviously, Yates and Dyer are dramatically different in many ways, but both were women who struggled with mental illness that was not accepted as mitigation during their trials (Yates’s second trial did result in an acknowledgement of her condition) and whose acts engaged one of our deepest taboos. Could you give readers a bit of a glimpse of how popular culture as well as the jury saw Dyer’s story?

The greatest challenge of understanding Amelia Dyer, back then and now, is working out whether she was aware of her murderous acts or whether she was suffering with a mental health condition, referred to as “homicidal mania” at the time. In the 1890s, as the police began to close in on her in Bristol, she attempted suicide twice and was confined to asylums. But there was also a possibility that, although she could be violent, she was pretending to be insane to escape the law. Moreover, there is evidence to suggest that she was a laudanum addict, which might explain the escalation in her crimes and her gradual loss of control over her actions.

This complexity of her character was discussed at length at her trial. The doctors who had treated her in Bristol, before she moved to Reading, disagreed as to whether she was insane or not. The experts called on to testify at her trial also could not agree on her mental state. Interestingly, the matron of Reading Prison and the medical officer at Holloway, both of whom had had time to observe and interact with her, believed that she was sane and responsible for her actions.

In the end, the jury took just under five minutes to convict her of willful murder, which reflected the general perception of her in the press and by the public. For both, Dyer was an evil killer and an unnatural woman.

Q. Sadly, Dyer wasn’t the only practitioner to turn to infanticide. Did her highly visible case result in any changes or reforms?

Baby farming was prevalent in many British towns and cities in the second half of the nineteenth century, and there were seven high-profile murder trials of baby farmers from 1870-1907. Gradually, awareness was raised of the terrible plight of nurse children and legislation slowly began to be implemented. The first Infant Life Protection Act was passed in 1872, but this merely required baby farms to be registered. The law was amended after the Dyer case and local authority control was tightened, but this was still inadequate and did not prevent further infant deaths. Finally, in 1908, the Children Act introduced a full range of measures to protect children, including those who were fostered or adopted. This formed the basis of our child protection laws today.

Q. In the Acknowledgments of her mystery novel The Angel Makers, Tessa Harris mentions that your walking tours of Amelia Dyer’s Reading haunts brought Dyer’s story alive for her. Tell us a little about those tours and the physical remains of the places amid which Dyer moved?

I do these tours ad hoc and it was lovely to have Tessa come along. Very little has changed down at the river Thames near Caversham since 1896, when Dyer lived there, which makes for a very atmospheric walk! The houses where she stayed are still there (I try not to lurk!) and the paths are the same ones she walked as she made her way down to the river to dispose of her victims’ bodies. Although the foot bridge has been replaced, it is quite moving to stand on the current one over the weir and think of all those tiny babies whose bodies were found in the swirling waters below.

Q. We’ll talk about your most recent books in the second half of this interview. For now, let me close by asking whether you have any future books about female protagonists in mind?

I’ve been extending my research into baby farming, in particular uncovering the history of the women who gave their children away to unscrupulous practitioners. Their backgrounds and circumstances are far more varied than generally considered, and I would love an opportunity to share their stories. 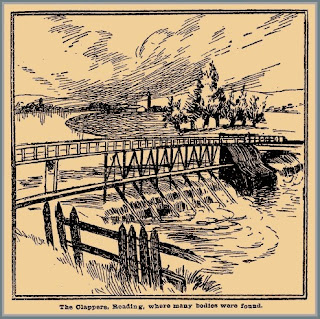 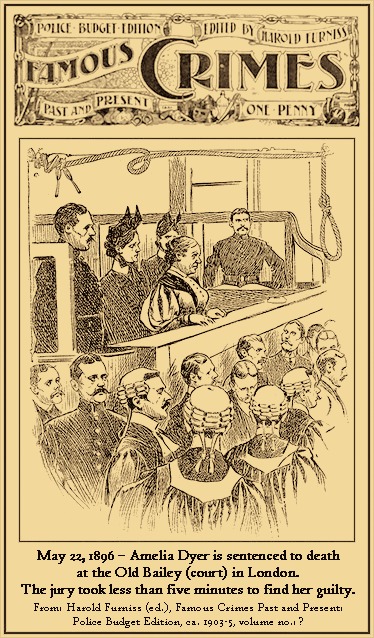