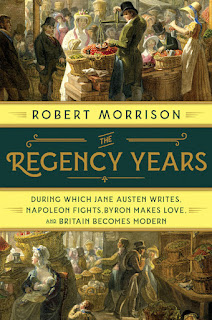 If you can imagine that, what you’re imagining is Robert Morrison’s The Regency Years: During Which Jane Austen Writes, Napoleon Fights, Byron Makes Love and Britain Becomes Modern.
Before I describe the book in more detail, a quasi-digression into Jane Austen, whose Persuasion Morrison has treated to an informative annotated edition (see our So19 chat about that book here) and of whom The Regency Years makes excellent use.
Like a fair number of other readers, I suspect, I’ve gotten much if not most of my sense of the Regency from Austen. I thus know quite a bit about the period, but only in a somewhat skewed and partial way. In suggesting that Austen’s novels offer a slightly misleading idea of the Regency, I don’t mean to suggest that she isn’t an accurate chronicler of the era in many respects. Its invitations, entertainments, introductions, friendships, attractions, understandings, courtships, marriages, births, and deaths; its expectations, understandings, and schemes both beneficent and malevolent; its incidents of abandonment, adultery, avarice, cruelty, debt, deception, illegitimacy, and manipulation of all kinds; its snobbery and more snobbery, greed and more greed: Austen’s work encompasses all of this and more. The larger events of the period, too, are referenced in her works, power if also both briefly and indirectly. Readers understand that the roving militias of Pride and Prejudice are not entirely occupied in amassing debts and fluttering feminine hearts. Persuasion’s sailors make their fortunes or lose their lives at sea because Britain’s economic stability as well as national security both depend on its Navy, which Napoleon is often keeping quite busy indeed. It goes without saying that Mansfield Park’s Sir Thomas Bertram journey obligations in Antigua involve a planation dependent upon slave labor. And pervasive in her work, as Morrison points out, is the social, sexual and financial vulnerability of women.

Yet for me, Austen’s focus on the manor, the village, and the family residence seems to keep such larger conflicts at a safe remove. Storms at home rather than tempests abroad drive her main plots. In Austen’s novels, a woman’s greatest danger always comes from those around her rather than from the huge and dizzying globe beyond. The characteristic balance of her prose, too, implies a manageable world. Her characters may be out of control, but her sentences, plots and perspective are not. When Marianne Dashwood nearly “screams in agony” as she shares the perfidious Willoughby’s letter with her sister, Emma Woodhouse returns home from Box Hill burning with well-earned shame, and Catherine Morland is expelled from Northanger Abbey to make her way home, alone, in the middle of the night, we feel their pain acutely. Yet reading Austen’s elegant, ironic and controlled texts, I never doubt that all will come right in the end. Justice will be done. Cooler heads and wiser perspectives will prevail. Calm will reign. All will come right, or at least right enough.

Which brings me back (not a moment too soon, you may be thinking) to  The Regency Years. Unconstrained by the conventions of fiction, Morrison doesn’t have to give his characters closure or his stories a tidy end. The scope of his vision, too, differs from Austen’s. Where she paints miniature portraits, domestic scenes and family “conversation pieces,” Morrison covers a huge canvas in movement, drama and color.* Morrison’s voice, like Austen’s, has a wonderful intimacy; as he speaks to us, we feel that we are being not so much informed as confided in. But if Austen invites us over the threshold into the family home and the private party, Morrison stands on the stoop, tucks our arm in his, and leads us out into the crowd.

And what a messy, diverse, contentious, and energetic crowd it is. In many and fascinating ways, the Regency that Morrison depicts is a paradox. It’s a time of tremendous idealism, an era pervaded with notions of reform. Morrison notes that Humphry Repton, the era’s most influential landscape designer, called himself a “professional Improver”; that strikes me as a title one could apply to a fair number of the period’s politicians, writers, thinkers and preachers.

Yet the Regency was also a time during which myriad inequities persisted unchecked, even flourished. Morrison’s nuanced depiction of period attitudes toward slavery encapsulates this tension. Though George III, the Prince Regent’s intermittently mad father, signed the abolition of the slave trade into law in 1807, slavery in the British colonies—an essential source of British wealth—was not abolished until 1833. “In the West Indies, meanwhile, it was business as usual,” Morrison writes. “British plantation owners had increased their numbers of enslaved people prior to the passage of abolition, and thus continued the frequently barbaric exploitation of black men, women and children in order to produce two major Regency commodities: rum and sugar. The profits from these estates were enormous.”

Morrison notes that Matthew Lewis, best known to posterity for his scandalous novel The Monk, chronicled his experience managing the family plantations in Jamaica in his Journal of a West India Proprietor. “At once patriarch and profiteer,” as Morrison puts it, Lewis instituted humane reforms including the establishment of a maternity hospital and great oversight of methods of punishment. When his efforts failed to ameliorate the suffering to any significant degree, however, he blamed not the slaves’ exhaustion, despair or resistance but their innate flaws, citing “a very great difference between the brain of a black person and a white one.” As Morrison suggests, much of our modern understanding of social injustice—the evils and interconnections of racism, poverty, prostitution, the oppression of women, colonialism, imperialism, and class hierarchy—is rooted in Regency thinking. Yet the change agents and activists of that period, like those of our own, found lasting transformation despairingly hard to produce.

While Morrison does full justice to this and other social and political issues, he also evokes the more personal aspects of Regency life. One of the book’s delights, as I suggested above, is its many and vivid quotations. Some of these are delightfully funny. We hear Sir Walter Scott grumble of Joseph Mallard William Turner that “Turner’s palm is as itchy as his fingers are nimble and he will…do nothing without cash.” Reporting on the Orientalist fad, Mary Russell Mitford notes that “Every room is in masquerade…the saloon Chinese, full of jars and mandarins and pagodas; the library Egyptian, all covered with hieroglyphics, and swarming with furniture crocodiles and sphinxes.” Charles Lamb, celebrating the ability of popular actor Joseph Munden to turn the ordinary special, says that “A tub of butter, contemplated by him, turns into a Platonic idea.”

But if some of the quotations and excerpts Morrison so deftly chooses are amusing, others are searing. Walking the fields of Waterloo in 1820, five years after the historic battle, Dorothy Wordsworth writes in her journal that “there was little to be seen; but much to be felt;—sorrow and sadness, and even something like horror breathed out of the ground as we stood upon it!” In describing the prison ships known as the “hulks,” Morrison quotes a prisoner named James Hardy Vaux. “There were confined in this floating dungeon nearly six hundred men, most of them double-ironed, and the reader may conceive the horrible effects arising from the continual rattling of chains, the filth and vermin naturally produced by such a crowd of miserable inhabitants, the oaths and execrations constantly heard among them.” John Polidori’s comment that “As soon as he reached his room, Lord Byron fell like a thunderbolt on the chambermaid" is a remark that’s at once cleverly aphoristic and vividly painful, at least if one takes the experience of the no-doubt powerless chambermaid being struck by Byron’s “lightning” into account. As all of these quotations suggest, Morrison’s book is filled with extraordinary characters, people whom he evokes in just enough detail to make us want to know more.

Morrison’s core assertion—that the Regency gave birth to the modern era—is convincing throughout. As much or even more than the ideas and innovations he chronicles, the voices he shares with readers are recognizably modern, recognizably “us.” Like ourselves, these speakers grapple with big problems, big disagreements, and big innovations. They have not reached the place of rest that exists, however briefly, near the end of each Austen novel. Even when they sound most sure, it feels as though they might yet change their minds; even when they draw conclusions, one senses that they are still in the midst of adding things up, pinning things down, and figuring things out. Above all, perhaps, the figures that Morrison’s book so skillfully gathers do not believe that their story is even clear, much less entirely finished.

And what, really, could be more modern—more 2021—that that?
You can find out more about Robert Morrison and his work on his website and purchase The Regency Years on Bookshop.org, on Amazon.com, and through your local independent bookstore.

*The use of George Johann Scharf’s 1825 watercolor of the Old Covent Garden Market on the book’s cover is apt. The original isn’t actually large, but it’s an image that feels large, so full is it of motion and contrast and people moving in and out of the frame.
Email ThisBlogThis!Share to TwitterShare to FacebookShare to Pinterest
Newer Post Older Post Home