So19 Interviews: ANDREA PENROSE on MURDER AT THE ROYAL BOTANIC GARDENS 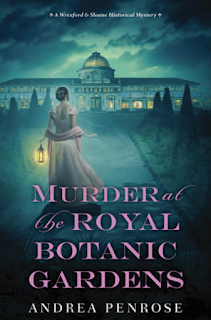 I’m delighted to share my interview with author Andrea Penrose on her fifth Wrexford and Sloane Regency-era mystery, Murder at the Royal Botanic Gardens. With a satirical artist and an amateur chemist as protagonists, the series makes rich use of the era’s complex scientific and cultural innovations. While such innovations rarely resulted in real-life murders, Penrose’s novels offer a vivid and realistic sense of the tensions that arose around them. Reading her books, I’m always introduced to a new aspect of the intellectual life of the period and also reminded that our own is far from the only historical period in which conflicts around the interpretation, communication and commercialization of new discoveries reached fever pitch. A voracious reader who’s been fascinated by the Regency ever since she first picked up Jane Austen’s Pride and Prejudice, Penrose received her undergraduate degree in art (though she also took enough history courses for a major in that as well) from Yale and earned her MFA in Graphic Design from the Yale School of Art, concentrating in publication design. In addition to the Wrexford and Sloane mysteries, she’s the author of seven Lady Ariana books, which she describes as being about “danger, devilry, deception—spiced with a dash of chocolate.” (Let me just add that if more danger came with chocolate, I’d be much less risk-averse.) She blogs at The Word Wenches, which is always a delightful read; you can find out more about Andrea and her work on her website and Facebook, Twitter, and Instagram feeds. Murder at the Royal Botanic Gardens can be purchased on Amazon, Bookshop, and through your local independent bookstore. With warm thanks to Andrea for taking the time to chat with me, here’s our conversation.

Q. What inspired you to choose Regency London as the setting for a detective series? Were you always drawn to that time and place, for example, or did it just allow you to write about particular issues that interested you?

I love the era because it was a fabulously interesting time and place—a world aswirl in silks, seduction and the intrigue of the Napoleonic Wars. Radical new ideas were clashing with the conventional thinking of the past. People were questioning the fundamentals of society, and as a result they were fomenting changes in every aspect of life. Politics, art, music, science, social rules—the world was turning upside down.

Technology was disrupting everyday life as the Industrial Revolution began cranking into high gear. Interest in science was exploding as people were suddenly wanting to understand the world around them and how it worked—geology; the workings of the heavens; the mysteries of the sea. People like Alexander von Humboldt, now considered the father of ecology, and Charles Darwin of evolution fame were starting to look around at flora and fauna and ask Why, Why, Why?

In so many ways, it was the birth of the modern world—and for me, its challenges, its characters and its conflicts have such relevance to our own times.

Q. The Earl of Wrexford is a respected amateur chemist, while his investigative partner and more recently, fiancée, Lady Charlotte Sloane, creates satirical drawings under the pseudonym A.J. Quill. In other words, you devised characters who are really immersed in the cutting-edge intellectual life of the period. Could you talk a bit about the particular gifts and sphere you chose for each and the themes they allow you to write about?

Lady Charlotte and Wrexford are inspired by actual history. One of the fascinating things my research has revealed is that many men and women of era were challenging the strictures of society and defying convention to pursue their passions.

Charlotte is passionate about the injustices and inequalities in Society. (As a young women she had had first-hand experience…but no spoilers!) The real-life satirical artists of the Regency were the sharp-eyed, sharp-tongued social commentators of their day. The public looked at their cartoons to see what was really going on in society. The art poked fun at the high and mighty and lambasted the political leaders, skewering their foibles and making public their scandals.

In my books, Charlotte takes over the pen of her late husband and under a nom de plume—because heaven forfend that a women who criticize the high and mighty!—becomes London’s most popular social commentator. And then she finds that her network of informants for learning these secrets proves invaluable when she’s drawn into solving a crime…

Wrexford is also a rebel. Many aristocratic men of the era felt just as constrained as the women did by the strictures of society and had difficultly exercising their talents. In the Regency, a gentleman would have been shunned from Society for soiling his hand in trade—in other words, he couldn’t run a business. It’s one of the reasons so many bright and inquisitive men who could afford it became amateur men of science. (I avoid using the word “scientist” as it wasn’t invented until 1833, following the end of the Regency era.)

I’ve made Wrexford a man of science because they were the creative thinkers and innovators of the era. Using logic and and empirical observation, they sought to understand the world around them. Wrexford cares about “truth,” and he finds that his scientific skills and reasoning prove well-suited to solving crimes.

For me, the pairing of Reason and Intuition has been really interesting to develop. Wrexford analyses everything. Charlotte trusts her intuition. They both are very careful observers, but see things in different ways. In the first book, circumstances force them into an unwilling partnership to solve a heinous crime. To their surprise, they come to have a grudging friendship.

Q. Previous novels in the series have offered mysteries related to industrial inventions, mechanical calculators, and electricity among other scientific or commercial developments. How do you choose the innovation at the heart of each new novel? Is it difficult to balance the technical aspects of each issue and the mystery plotting?

There are so many fascinating technical innovations that developed during the Regency, so I have a wealth of ideas from which to choose! I try to pick inventions or concepts that changed basic elements of life. Change is frightening, and that adds an element to the mystery. And like our world today, the skullduggery over patents and how to profit from ideas and innovations offers a wealth of plot twists.

Q. As its title suggests, you turn to the life sciences, specifically the medical and commercial potential of plants, in Death at the Royal Botanic Gardens. Can you talk a bit about this element and what drew you to it?

I first “met” David Hosack, a real life American physician who plays a role in the book, in Victoria Johnson’s marvelous book, American Eden: David Hosack, Botany, and Medicine in the Garden of the Early Republic. It really piqued my interest in how the concept of medicine was changing during the Georgian/Regency era.

So much of medicine at the time was based on either superstition or ideas from the ancient Greeks. Britain was a leader in exploring new ways thinking about medicine. (Hosack studied in Scotland and took his passion for plants back to America.) British universities began establishing medicinal gardens; botanicals had of course been used for centuries by local healers, and now finally the medical profession was taking them seriously! The idea took root and scientific societies, both in Britain and Europe, followed suit and began to trade specimens with each other. The Royal Botanical Gardens at Kew became a major player in the development of plant knowledge, and was the catalyst for discovering new botanical new cures for ailments.

The development of “wonder drugs” from plants seemed a really compelling plot for a book…and so my mind starting spinning a plot!

Q. The changes in Sloane’s life over the course of the series suggest some of the complex constraints that affected Regency women. Early in the series, her life is precarious in many ways, but she has a certain exemption from polite society’s expectations and limitations for women. As time progresses, both her deepening romance with Wrexford and her situation vis-à-vis her family of origin begin to pull her back into the upper-class orbit in which she was raised. So to my mind, she illustrates a sort of paradox: as she regains greater financial stability and social rank, she loses some of the freedom she’s enjoyed from stringent notions of propriety. Fair reading?

That’s a perfect reading of Charlotte! And readers will see her wrestling with those conflicts in this book. I really like writing about people who are both strong and vulnerable. We all have strengths and weaknesses, and how we learn to balance those conflicting elements is, to me, an integral part of the human experience.

Q. Because they’re so intricately related to the scientific and commercial developments of the Regency, your novels clearly take a lot of research. Can you tell us a little about how you approach that part of your work—sources you draw from, visits you make, contacts who help with specific issues, and the like?

I love research! I’m a real history nerd and enjoy reading books on all sorts of esoteric topics, which is where I often stumble upon an “ah-ha moment” where I suddenly see something that would be a great “MacGuffin” for a book.

Just as important, I love museums. When I go to Britain, I make a point prowling through every small, offbeat museum I can find, as well as the famous ones. London and Oxford are magical places for discovery. I learn all sorts of fun things about a variety of subjects in places like the Science Museum, the Docklands Museum, the Horse Guards Museum, the V&A Museum, the National Portrait Gallery and Kensington Palace. I find all the little details I gather in those places help add color and texture to mysteries. I really enjoy trying to paint a vivid picture of the Regency—the clothing, weapons, carriages and ballroom, to name just a few elements.

The next Wrexford & Sloane! All I will say about it is this—there are times when an author gets extraordinarily lucky and history provides a setting for a mystery more perfect than any writer would dare to imagine. Look for it in September 2022.
Email ThisBlogThis!Share to TwitterShare to FacebookShare to Pinterest
Newer Post Older Post Home