So19 Talks With novelist JOHN HARWOOD 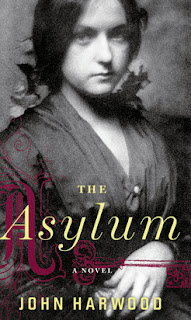 Australian author John Harwood (not to be confused with the American journalist) was a literary scholar and biographer before leaving academia to write full-time. His two previous novels, The Ghost Writer and The Séance, appeared to wide praise from critics and readers alike. His latest foray into the Victorian Gothic, The Asylum (Houghton Mifflin Harcourt, May 2013) begins as a young woman finds herself confined to a remote institution under a name not her own, while another woman lives the life she believes is hers. Here, Harwood talks to So19 about subjects including The Asylum, issues of identity, forms of narration, the enduring appeal of the Victorian era, favorite writers including M.R. James, and more. <

So19: You have such a deep “feel” for the Victorian era. Does this come from your scholarly work, or were you introduced to period literature or culture as a younger person?


JH: It goes all the way back to my childhood in . in the 1950s still felt like a Victorian town: old stone warehouses, dank alleyways; some deliveries were still done by horse and cart. There was a rivulet running through a dank, rat-infested tunnel beneath the streets: a perfect place to imagine yourself into the world of Oliver Twist, or the Sherlock Holmes stories, which I read over and over, when not terrifying myself to sleep with the ghost stories of M. R. James.

So I felt very much at home when I arrived in as a postgraduate student working on T. S. Eliot. Later on, I was drawn to write a biography of the novelist Olivia Shakespear, who had moved to in the 1880s and lived there all her life. Reading hundreds of original letters and journals, tracing forgotten figures of the 1890s through old street directories and public records, led me deeper into that world.

A decade or so later, after I’d resigned from university teaching, finished one unsatisfactory novel and abandoned another, I thought of writing a novel based on Olivia Shakespear’s life. And then it came to me: why not make her a writer of ghost stories? At which point Viola Hatherley appeared to me as a fully-developed character. And, writing in her voice, I felt for the first time that I was writing stories that no one else would have written, that were, paradoxical as it sounds, truly and authentically my own.


So19: Why do you continue to be drawn to this period in your fiction?


JH: Partly because I know it so well. But most of all, I think, because it’s distinct from the world I live in. My ideal as a novelist is to become transparent to my material, a spirit medium, as it were, through whom everything is relayed to the reader. I prefer working with narrators who are quite different from me, which is why, perhaps, so many of my narrators are young women. So the Victorian era, for my purposes, is at just the right distance from ours. Everything—not just the décor, but ways of thinking and feeling and communicating—has to be re-imagined, and yet it’s close enough to our world that once you’re inside, there’s no loss of immediacy.


The language, too, is subtler, in many ways, richer and more nuanced, especially for rendering shades of feeling: Victorian English has a much larger working vocabulary for emotion than we naturally employ. My version of it is plainer and sparer than the stereotypical Victorian idiom, which we tend to think of as pompous, ponderous and over-ornate. But many Victorian writers were as eager to mock the stereotype as we are. Whenever I re-read the omniscient chapters of Bleak House, I’m struck by how ‘modern’ they sound—and they were written in the early 1850s, thirty years before the time at which The Asylum is set.
So19: What do you think it is that makes this period in general, and the Victorian Gothic in particular, so fascinating to contemporary readers?


JH: For some of the same reasons, I suspect, as I’ve just given. When you enter a Victorian mystery, you step into a darker, more menacing world, without any of the technological comforts—cell phones, cars, electric light—that we take for granted. A world in which the consequences of every decision—especially for women—can be far more momentous. Once inside that isolated, crumbling mansion, you’re utterly alone with whatever may be lurking there. Supernatural intrusions can seem far more plausible. But it’s also a more elaborate, slower-paced society, and there’s a fascination in seeing how characters deal with its constraints. So again I think it’s that combination of near-familiarity and striking difference that works so well.


So19: Like The Séance, this book’s structure uses a 19th-century convention of juxtaposed documentary and epistolary narratives. What do you feel this structure offers in comparison, say, to another Victorian convention, that of the omniscient narrator?


JH: The great advantage of this method—where everything has to come to us through a single consciousness, or else through letters, journals and documents to which the narrator has access—is that it heightens immediacy and suspense, and delivers a kind of psychological realism that’s hard to maintain with an omniscient voice. Because if you or I were plunged into a mystery where unknown forces were disrupting our lives, and everything we thought we could rely on was called into question, that’s the position we’d find ourselves in, not knowing who to trust, with only our own instincts and perceptions to rely upon. But it can also be hugely frustrating; the mechanics of getting vital information to the reader without breaking the rules or doing something wildly implausible can drive you to distraction.


Omniscient narration is ideal if you’re working on a large social canvas (as in Middlemarch or Vanity Fair or the omniscient strand of Bleak House). But for gothic mystery, a restricted point of view works best, I think.


So19: The novel works so richly with the theme of identity. Its opening variation on that issue is particularly terrifying: the idea of being at the mercy of powers that refuse to believe that you’re “you.” It’s a possibility that’s at once true to the period and quite contemporary in its resonance.


JH: Yes, identity theft is one of those themes that resonates very strongly between the Victorian era and our own. Victorian novelists—Wilkie Collins in particular—were fascinated by the fragility of identity. Your family history determines your identity, your income, your possessions, and if that history is lost or falsified or denied, then ‘you’ no longer exist. Ozias Midwinter in Armadale is an extended study of the pathology, if you like, of having absolutely no way of telling who ‘you’ really are.


In my novel, I wanted to leave open the possibility that really is deluded, as Dr. Straker insists in the opening scene, and to explore the psychological consequences of that extreme uncertainty.


So19: Victorian asylums are fascinating as both literal and metaphorical reflections of female powerlessness in the Victorian era. Was the asylum part of your vision for the book from the start?


JH: The very first image that came to me—my stories seem to grow out strong visual images that haunt me until I’m compelled to explore them further—was of a young woman standing in an overgrown graveyard, confronting her own tombstone, according to which she died when she was three days old.  At the time I wasn’t even aware of its probable inspiration—the great scene in The Woman in White where Walter Hartwright finds Laura Fairlie standing beside her grave—because mine was a tranquil, daylight scene, with no sense of foreboding until Georgina (as she became) discovered the tombstone with her name on it.  So the identity theme came first: if this is where Ferrars is buried, I can’t be who I think I am. That led in turn to the realization that it should be set in an asylum: the ultimate in powerlessness, as you say.


So19: You mention the ghost stories of M.R. James, a wonderful writer who is too little remembered today. What is it that you especially liked, or like, about his work? Did his stories help inspire you to work with the scary or supernatural in your own writing?


JH: In a word, restraint. MRJ was a master of atmosphere: the dusty ecclesiastical settings, the slow, subtle build-up in which you know something sinister is approaching, but you’re not sure what until the final terrifying revelation, which often lasts only a few seconds.  He’s a superb descriptive writer with a wonderful eye for detail.  Yet he also leaves as much as possible to the reader’s imagination.


I think restraint is almost a defining characteristic of the classic English ghost story, of which MRJ was the finest exponent. But it was the other James, Henry, who released the ultimate potential of the ghost story, by transforming it into an equivocal, unstable form of psychological realism.


The Turn of the Screw is the most terrifying supernatural story I’ve ever read, precisely because it’s irresolvably ambiguous. Are the ghosts real, or is the governess mad…or both? It’s impossible to decide. To claim, as recent critics tend to do, that the ghosts exist only in her disordered mind doesn’t make them any the less powerful or malignant; the child still dies. Brad Leithauser described the effect perfectly in his New Yorker blog post on October 30, 2012: “You can snap shut the cover of the book, much as you would close up a crypt, on the tale of the unhinged governess and her ill-fated charges. But the crypt creaks open again if she is not mad. When the completed book is once more on the shelf, the more frightening interpretation is the one wherein some actual supernatural agent is loose and walks among us.”


So19: Lightning and its electrical properties appear in The Séance, and the powers of electricity play a role in The Asylum as well.


JH: My interest in archaic electrical devices surfaces again. Victorian psychic theories drew heavily upon electricity and magnetism, and the apparent links between these invisible forces and the realm of mind and spirit: animal magnetism, mesmerism, telepathy and so forth. By the 1880s, all sorts of electrical and magnetic treatments for psychological disorders were in use.  And of course the dangers of some of the new technologies weren’t immediately apparent. When the first X-ray machines went on display, they attracted huge crowds. People were eager to put their hands and even their heads into the machines. That first X-ray image of Anna Roentgen’s hand, with her wedding ring starkly outlined against the finger bone, is as chilling today as it ever was.


So19: We hope you’re working on a new novel?
JH: Yes—another excursion in Victorian gothic, pursuing my interest in strange and troubled perceptions, hallucinations which may not necessarily be hallucinations, and more. To be continued…<
Email ThisBlogThis!Share to TwitterShare to FacebookShare to Pinterest
Newer Post Older Post Home