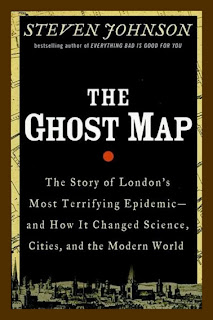 Begin with a five-page discussion of excrement collection in Victorian London. Pause for a graphic description of the course a deadly disease (not to be missed: “a rapid gush of serum” and “blue leathery skin”). Discuss, at length, various British men unknown to, and largely unmissed by, most Americans. End with a discussion of urbanism, epidemiology and the pandemics of the future.


That doesn’t sound like the formula for a winning book. In fact, had American science writer Steven Berlin Johnson been a much-published author and something of a celebrity by the time he wrote it, you might still be hearing the snickers of literary agents and publishers around .


Yet Johnson’s 2006 The Ghost Map—subtitled, probably not by Johnson himself, “The Story of London’s Most Terrifying Epidemic and How It Changed Science, Cities, and the Modern World”—has developed not just an enduring life, but also a passionate cult following in unexpected quarters. Writers, including upcoming So19 interview subjects Charles Finch and David Morrell, refer to it with some reverence. I myself have been a huge fan of the book since the day I read it in 2008. That doesn’t sound remarkable, but it is. Hugely squeamish for most of my life, I typically avoid medical discussions like the plague, to use an appropriate analogy. Yet The Ghost Map delights me, and remains a book I re-read periodically and recommend often.


The book’s narrative centers on the Londoncholera epidemic of 1854, one of a series of such outbreaks that had dogged since 1832. This one struck in the heat of late August. Within ten days, over 500 people were dead. Entire families perished within hours of each other, though other residents of the congested neighborhood—all of the workers at the Lion Brewery, for example—were mysteriously spared.


With memories of earlier deaths still fresh, there was vigorous dialogue about cures and containment strategies. A letter to the Times enthusiastically suggested the ingestion of ether as a cholera remedy. In the midst of the hubbub, Dr. John Snow—a leading figure in the then-nascent field of anesthesiology—did something quieter and more efficacious than write letters to the editor. With support from fellow resident Henry Whitehead, Snow performed the patient demographic work we now associate with institutions like the CDC, going door to door to investigate exactly who had been struck and what they had in common. The answer, he soon confirmed, was water. Those who had drunk from the pump at Broad (now Broadwick) Street were felled; those who hadn’t, weren’t. The “ghost map” of the book’s title is Snow’s chart of the outbreak, a stark grid of Soho’s streets overlaid with a pattern of dots that identify precisely who was stricken, where they lived, and what water they drank.


The idea of contaminated water as a source of disease doesn’t sound implausible to us today, used as we are to the existence of bacteria and viruses and vectors. But before the adoption of germ theory it was a challenging notion, especially when the water in question was noted for its apparent purity.


The research behind Johnson’s book is impeccable, the prose lucid and energetic, the selection of detail brilliant. But I think the appeal of the book goes beyond those hallmarks of good nonfiction writing. The Ghost Map works because it works like a novel. A mystery novel, in fact.


Which means that it begins, of course, with a memorable villain. “King Cholera” was a mass murderer crueler than any of the gruesome culprits featured in the period’s penny dreadfuls. It was lethal, it was persistent, and it even had a distinct personality: a gleeful delight in the grotesque, a callousness about the suffering of the already downtrodden, a love for the unexpected, and more than enough cunning not to be easily caught.


Next, it has a complex puzzle. Why did cholera fell some and spare others, exempting poor people who might be thought to be the most likely victims but killing, say, a lady in comfortable Hampstead? Why did it arrive so suddenly, then depart with equally bewildering speed? With the tests and technologies we have at our disposal today, these conundrums might not have felt so daunting. But in 1854, with even a modest investigative instrument like the stethoscope only two years into its commercial availability, they must have seemed frightful indeed.


Third, it has a compelling detective. John Snow is a fascinating figure, with the appreciation for precise systems that have come to define modern science but also a quirky, hands-on approach to research that is impossible to imagine from today’s scientists. (He tested ether’s effects on human subjects using himself.)  His collaborator Whitehead, a curate St. Luke’s Church, was a generous and gregarious fellow with an intimate knowledge of ’s residents and a love for discussions of ideas. It would be inaccurate in many regards to describe the two as a medical Holmes and Watson, but one could fairly say that their partnership offered a similar, and similarly appealing, kind of balance. Whitehead could be said to be the heart to Snow’s head, the conversation that balanced the charting.


Fourth, of course, Johnson’s story has an absolutely riveting setting. The of the period generally, and the of the period specifically, were mesmerizing in their color, their character, their contrasts.


Last but not least, the main narrative of The Ghost Map has a hopeful ending, at least partially. (As the book notes and the cholera outbreak after the Haiti earthquake, among other news items, reminds us, deadly disease remains very much a fact of life today.) As happens in most great mystery stories, order was restored to the stricken community. The strategies John Snow proposed—to clean up the sewage problem, and therefore purify the water supply—weren’t adopted fast or broadly enough to prevent another outbreak. But his theories were sufficiently persuasive to lead authorities to remove the handle of the pump at only a week after the outbreak began, and to prompt what would become the vast sewer construction work of the 1860s. The city began to grow cleaner and less odorous; the began to heal, changing back from a stinking open sewer to something resembling a river again. The scourge of disease abated slightly, thanks not just to Snow’s cholera discovery but also to the introduction of germ theory, anesthetics, and antiseptics. The London that closed out the 19th century was just as colorful and contradictory as its mid-century ancestor, but it was—slightly but noticeably—less lethal. 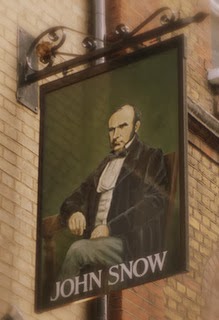 The Ghost Map, that is, works not just as science but as human story, not just as analysis but as narrative. If you want a riveting mystery set right in the chronological and geographical heart of the Victorian era, you can’t do better than start here. Johnson’s other books—including The Invention of Air, Where Good Ideas Come From, and this fall’s Future Perfect—are excellent as well, and I’m looking forward to Johnson’s PBS series How We Got to Now, which airs in Fall 2014. I gather that one segment will explain how we “got to” clean drinking water, giving John Snow the chance to appear on an invention beyond his wildest, semi-etherized dreams. < Suzanne Fox is the editor of Society Nineteen. Her books include Home Life: A Journey of Rooms and Recollections (Simon & Schuster). A resident of , she writes for Publishers Weekly among other publications and teaches frequently on book structure, creativity, and literature. For more on Suzanne’s work, visit her website here.
Email ThisBlogThis!Share to TwitterShare to FacebookShare to Pinterest
Newer Post Older Post Home