So19 talks with ANDREW HUGHES 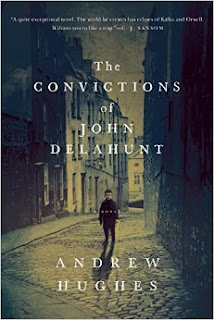 Controversies regarding the legitimacy of information gathering and use are often assumed to be a contemporary phenomenon. But as Andrew Hughes’ masterful debut novel reminds us, the lack of digital technology didn’t stop the powers-that-be of the past from making efficient and sinister use of a citizenry’s secrets. As The Convictions of John Delahunt (Pegasus, June 2015) opens, the titular character joins the elaborate network of paid informants used by the police to control—in theory, at least—the unruly Dublin of the 1840s. Enriched and emboldened by his masters early on, he is later outdone and undone by them, only to manage a dark and unexpected justice in the end. Based on historical events but transformed by the novelist’s art, Delahunt’s odyssey through the more harrowing elements his city, his time and his own soul is not for readers who like their Victorians cozy. But I’m confident that others will find it richly detailed, beautifully voiced, and often darkly funny, with the kind of final plot twists that linger in not just the mind but also the heart. A resident of Dublin, Hughes is a qualified archivist who has worked for RTÉ, Ireland’s national television and radio broadcasting organization. He encountered the historical events that inspired The Convictions of John Delahunt while researching his first book, the nonfiction Lives Less Ordinary: Dublin's Fitzwilliam Square, 1798-1922. To keep up with Hughes and his work, follow the author on Twitter. Society Nineteen is delighted to talk with Andrew Hughes about creative inspiration, research, the 19th century, and the undeniable satisfactions of writing and reading about undeniably unsatisfactory characters. —SF

So19: Let’s begin with your first book, the nonfiction Lives Less Ordinary: Dublin’s Fitzwilliam Square, 1798-1922. Can you tell readers who may not be familiar with it a bit about that book, and also how your work on it led you to the story of John Delahunt?

AH: I used to research the history of Georgian houses in Dublin, seeking out long-forgotten tales of former residents, and looking again at history through their perspectives. For my nonfiction book, I collected together all sixty-nine houses of Fitzwilliam Square, and produced a social history. I didn’t know it at the time, but a pleasant bonus of all the research was that it gave me a fantastic setting for historical fiction, and also a ready-made cast of characters.


I stumbled upon the story for the novel by accident while looking at an unrelated trial that took place in 1844. There was a fleeting reference to the murder of the Italian boy, which had caused a sensation in Dublin a few years before. I’d never heard of it, but I was intrigued by the title given to the crime, and when I went looking for more information, I first came across the name of the police informer and suspected murderer, John Delahunt.

So19: What was it in Delahunt’s life or character that appealed to you as a seed or starting point for fiction? How did you find yourself adjusting the historical record on him to fit the needs of your fictional narrative?

AH: I knew I had a good starting point for the novel. An actual report of a phrenologist who studied and interviewed Delahunt while he was awaiting the gallows survives in a Phrenological journal of 1842. The doctor even made a plaster cast of Delahunt’s head—who knows, that may still exist somewhere, hidden away in someone’s loft. I’m not sure how I’d react if I ever came face to face with him!

By rendering that encounter in the very first scene, I was able to establish my version of Delahunt’s character. He’s shown as someone who is confined and condemned by Victorian society, but also as someone who can closely observe it.

When I began, I’d hoped to build the novel around these true-life reports—perhaps I’d been inspired by Kate Summerscale’s The Suspicions of Mr. Whicher. But there wasn’t enough primary material to sustain that true-crime style, and for most of the narrative I had to fill in the gaps. In the end that was just as well. It gave me the freedom to explore the ‘fiction’ side of historical fiction.

So19: You immerse the reader in the mind of the fictional John Delahunt, and make it an intense and disturbing (if also, at times, mordantly amusing) place to be. That’s part of what makes the book so powerful for readers, yet I wondered what it was like to inhabit his consciousness long and deeply enough to write the book.

AH: It was odd, but often fun. Whenever Delahunt was faced with a situation, I just had to imagine the most cynical, most darkly humorous response possible, and have him do that. But it was a strange head-space to inhabit, especially when dealing with his crimes and other harrowing scenes. It’s partly the reason that the central character of my next novel is a young heroine, but more of that below.

So19: I was intrigued to see in your author biography that you’re a professional archivist, both because I’d imagine that helped in your research and also because the novel’s plot involves a particularly efficient archive of sorts.

AH: Yes, I’m well used to leafing through dusty documents. It was a great help for the research. Just being immersed in papers and correspondence from a certain time gives you an ear for language and vocabulary. And it was interesting to reconstruct the spy system of Dublin Castle, which was really a forerunner of modern surveillance agencies that are so much talked about these days. Also, my fictional archivist, Farrell, has a small but important role to play at the end.

So19: You’ve captured the feeling of how lived was lived—its textures, its rhythms, its sensations, its places and objects, its events and pastimes—so vividly. Were there tools or sources that were particularly helpful with finding those experiential details?

AH: I depended a lot on the research I did for Lives Less Ordinary, and other social histories and memoirs. It’s also the case that in Dublin—or any old city—you’re always confronted with echoes of this kind of history. Sitting in the drawing room of a Georgian townhouse, it’s not so difficult to imagine what life may have been like for those who lived there. There’s certainly no shortage of Victorian pubs, and the colleges, the law courts, the principal streets, they’re still much the same as they were in 1841.

So19: From rat-baiting and public hangings to inequitable justice and economic systems and beyond, the novel makes one aware of how harsh life in the period could be, even for someone like Delahunt, who comes from a relatively privileged background. It reminded me how few of today’s limits, checks and balances, and so-called safety nets yet existed…and is certainly a corrective to that odd notion that the Victorians, so called, inhabited a sort of sheltered and cozy world.

AH: I remember reading an article by Hilary Mantel in The Guardian that dealt with this subject. She said that some would accuse historical fiction writers of presenting the past in a cozy, romantic glow, when in fact the opposite is true: we have to deal with realities and attitudes that are now considered harrowing and deplorable.

I like how Dublin’s Georgian houses represent this. They were built as homes for the genteel and privileged, but as the city lost its standing following the Act of Union, many of the houses fell into disrepair. They were taken over by rack-renting landlords, and turned into tenements for Dublin’s most destitute. In the novel, it was good to be able to show both sides of this divide, and some of the many hardships. And of course it helped the story. Delahunt’s fall from grace meant he was ever more dependent on his paymasters in the Castle.

So19: Perhaps you could talk about your writing process a bit: how long the project took, how and whether you divided up research and drafting, how if at all the work differed from of creating the nonfiction Lives Less Ordinary.

AH: I wrote all of the novel while attending a writers’ workshop in Dublin, led by the American author, John Givens. It was great to have a group like that to offer advice and support, especially as it was my first time writing fiction. There were four or five writers, all just starting out, and we’d meet once a week in the Library Bar of the Central Hotel. They were the first to tell me that it was all right to move away from the constraints of history writing, and just make stuff up!

Attending those weekly meetings also gave me the sense of writing the book in serialization, like in one of those 19th century periodicals. I tried to have something of interest happen each week—a plot point resolved, or character introduced, or a piece of action—so hopefully it helped to keep the pace of the novel tripping along.

It was a very different experience compared to writing non-fiction, as it’s mostly based on voice, narrative arc and the rendering of scenes. But I found it to be more enjoyable, so much so that I think I’ll remain a fiction writer from now on.

So19: Last but not least, what are you working on now?

AH: As I said earlier, when I was finished with Delahunt, I wanted a completely different character for my next novel. So she’s a young woman instead of a man, and the hero instead of the villain. It’s set in Dublin again, this time in 1816, which was called the year without a summer, and it’s entirely fictional. The main character is Abigail Lawless. She’s the daughter of the coroner, and something of a young lady sleuth operating at the dawn of forensic science. 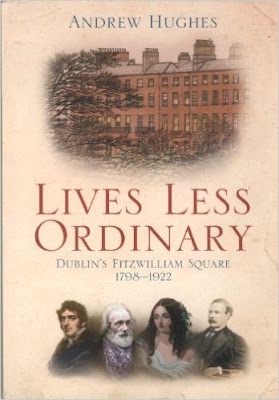