So19 talks with JEFFREY MARSHALL 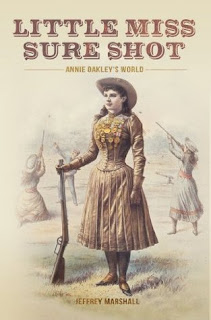 As a little girl, I was certain that I would grow up to be either a princess (a job that seemed to consist entirely of ordering people around and wearing pretty clothes) or a cowgirl, sharp-shooting with unerring accuracy from the back of a galloping steed. The princess dream came from myriad fairy tales, Disney movies, and picture books, but the source of my cowgirl aspirations can be stated in two words: Annie Oakley. Vividly if not very accurately portrayed in the films, television and children’s books of the 1960s, Oakley seemed to this shy little girl the epitome of female glamour and power. As the years went on, she was superseded in my imagination by a long list of other role models, but I’ve never forgotten the resonance she once had for me. So it was with great delight that I encountered Jeffrey Marshall’s Little Miss Sure Shot, a novel based on the iconic Annie’s actual life. In addition to chronicling the exploits and encounters that made her famous, Marshall gives us rich glimpses of the often surprising woman behind the scenes. Her long and loving marriage to manager/husband Frank Butler, her origins far from the West, and her life after retirement: depicting all this and more, Little Miss Sure Shot is one of those fictions that reveals far more of the truth than many a biographical account. Jeffrey Marshall earned an undergraduate degree in history from Princeton and a master’s degree in journalism from Northwestern. Prior to writing Little Miss Sure Shot, he worked for 35 years as a journalist, starting as a newspaper reporter and editor and Associated Press correspondent before moving into business and financial journalism. For more about author and book, including a fun gallery of Oakley images, visit Marshall’s website and follow him on Twitter. Note that in addition to the print and e-book versions, Little Miss Sure Shot is available as an audiobook, with a young narrator who really brings it to life. —SF

So19: Let’s talk about the genesis of this novel. How did a former journalist and financial writer come to write about Annie Oakley? (For the record, I’ll refer to her as such for simplicity’s sake, but of course she was born as Phoebe Ann Mosey.) Have you always been drawn to her period, or the “Wild West”? Did you intend from the start to write about her, or discover her in the process of some other exploration?

JM: I actually started with Buffalo Bill Cody. A little over two years ago, something I read or saw reignited my interest in Cody and the Wild West Show, and I started doing some research at a local library to see if there was some kind of material for a historical novel. I have two unfinished thrillers from many years ago and had been thinking for years about penning a historical novel.

I found that there was plenty—too much—written about Cody, both fiction and non-fiction. I didn’t want to add another book to that pile, and the research established the importance of Annie Oakley to the show.

I really didn’t know that much about her—and I had never even seen Annie Get Your Gun—and I found her story intriguing; she was certainly a woman ahead of her time. And, I realized, apart from a few biographies, there wasn’t that much written about her. Oddly, many of the books that are out there are essentially picture books aimed at schoolchildren.
I have been drawn for many years to that period. It’s a fascinating era, one of Manifest Destiny and the taming of the West, and one in which America was gradually asserting itself on the world stage.


So19: Perhaps you could talk a bit about your research for the book. What kind of sources did you use? Did you visit any of the locations you reference? Were there sources or processes that helped you grasp the textures of Oakley’s times…the small details of life, as opposed to the actions and events?

JM: I have to admit that I eschewed any original sources. I didn’t want to travel, and this isn’t a biography that would have required that kind of research. I read a couple of very good biographies that gave me a good scaffolding for the book, but apart from the detail in those, what is in my novel comes from my imagination. In a lot of areas, I just had to use conjecture and build on what little I did know. There were times when I was able to effectively use the Internet as well in tracking down details about people or places that appear in the book.

So19: The novel is based on recorded fact about Oakley, her life and her times, but like all fiction, it uses “reality” as foundation rather than limitation. What were the challenges of transmuting fact into fiction? Were there aspects of the story that you found particularly hard, or easy, to imagine?

JM: It was certainly easier to build on the parts of her life that are best known, especially her tours with the Wild West Show. There wasn’t a lot of information about some of the finer details, however, and I invented them: what Parisians would have seen when they entered the show, what was served as food or drink, the details of the daily parade that the show made in each new town. Those were actually relatively easy to imagine. What was harder to imagine was the kind of practice Annie did, and how she honed her skills as a girl.

So19: From the details of her life to the name itself to her portrayals over time, “Annie Oakley” is not a person but a persona crafted for marketing purposes…and like today’s celebrities, the persona was surely quite different from the actual woman. In what ways did you feel that her public persona was true to her life and nature? How did it diverge most sharply from or contradict the real woman?

JM: The public persona reflected someone who was an amazing talent, could perform under almost any conditions, and was even-tempered. But yes, the persona for marketing purposes diverged: she was presented as an innocent maiden from the Plains, when she was actually a married woman who grew up in Ohio and had very little exposure to the real West. Plus, Annie herself had the show publicist change her age to make her six years younger; she was deeply concerned about having a younger woman challenge her for the spotlight. What’s more, the real Annie was rather prim, religious and somewhat shy; in the ring, however, she was a performer who curtsied, stomped her feet in mock frustration and blew kisses to the crowd.

So19: I was fascinated by your depiction of Oakley’s relationship with Frank Butler, who acted as her manager and to whom she was married for fifty years. Can you tell readers a bit more about it and how it helped shape Oakley’s life and career?

JM: It’s hard to imagine her career without him: He sacrificed his own career for hers, a very rare event in those days, and he took care of all the incidentals involved with her act. These included contracts, practice, scheduling and (with her help) bringing new elements into her act. They were inseparable, and by all accounts, had a mutual love and togetherness that was highly unusual.

So19: The public Annie Oakley is a role model for women thanks to her success in a man’s world, but as is often the case, the private woman was more complex than that. Perhaps you could speak about this?

JM: She was not a feminist or a suffragette, and as I understand it, had a quite traditional stance on the roles of the sexes. But she did believe that women should learn how to shoot and, if necessary, defend the home. She even made a bold approach to President Woodrow Wilson in 1917, asking if she could be allowed to put together a brigade of women shooters to help defend the country, if needed, in World War I. Her request—certainly heretical for its time—was politely rebuffed.

So19: Like many of us, I suspect, I associate Oakley with the 19th century. But as your novel reminds us, she lived until 1922, and her later life was active, accomplished, and dramatic.

JM: She actually died in 1926, and after 1901, when she stopped touring with the Wild West Show (following a serious train accident), her name began to fade from the limelight. Her later years were spent largely traveling and instructing people, especially women, in the art of target shooting.

So19: Oakley has been portrayed in scores of films and other fascinated generations of Americans. Why do you think her appeal is so lasting? What does she say about our dreams and values, do you think?

JM: Terrific questions. First and foremost, I think she is a beacon to women: she achieved a level of skill and fame in her field that was unheard of for a woman, and in an era in which women rarely were in the limelight. There’s also the notion of rising up from literally nowhere. She grew up poor with no formal education, yet became a household name. Then there’s the matter of her astounding skill, which is almost unfathomable, particularly since much of her act was done in motion: riding a pony or a bicycle, jumping over gun-stands to grab a rifle and notch a few glass balls…it was something that just made people shake their heads or cheer in awe. When people think of mastering a physical skill, particularly one that calls for precision, Annie Oakley often comes to mind.

So19: What are you working on now? Another novel, we hope?

JM: I’ve started working on a contemporary thriller that involves people captured by survivalists in the Mountain West. I’m still sketching it out, and plotting it will be a considerable challenge. But I like what I’ve written so far, so we’ll see how it goes!