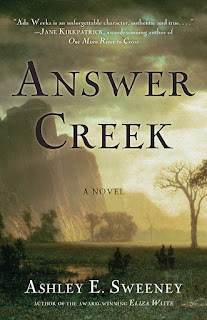 Ashley E. Sweeney, the author of the excellent novel Eliza Waite, returns with a gripping story of loss, survival, and female strength. Answer Creek sets its fictional protagonist, Ada Weeks, among historical figures including Tamsen and George Donner, whose name now lends itself to macabre legend. Ada is traveling with a sizable group of emigrants bent on California when her adoptive parents are swept away in an ill-considered river crossing. She’s taken in by the Breen family, whose redoubtable matriarch, Margaret, has seven children including an infant who is nursing during the journey West. There are moments of delight, beauty and even transcendence: Ada glimpses one of the West’s most spectacular sights with newspaperman Edwin Bryant, for example, and falls in love with fellow emigrant Patrick Dolan. But the way becomes increasingly punishing as the party moves westward even before the Breens, like the Donners, decide to try the shortcut known today as the "Hastings Cutoff." Though Ada makes it through the months they spend, snowbound and starving, as a result, she arrives in California with another thorny problem before her: having survived, how does one go on and build a life when everyone and everything familiar is gone?

Reading Answer Creek, I could feel the pioneer experience in a way I never had before. (I would have been exponentially more attentive in American history classes had Sweeney taught them.) Sweeney does such a masterful job of evoking the journey, from the shifting challenges of the landscape the emigrants move through to the emotional complications of being dependent for survival on people who were strangers months or even just weeks before. The epic sweep, the vast scale, of the trek is vividly felt, but so are the smallest of details, from the inevitable bickering among fellow travelers to the difficulties of dealing with menstruation while walking thousands of miles. And though Sweeney does justice to the horror of those snowbound months, they are just one segment of the novel’s physical and emotional journey, one aspect of its broader perspective.

Answer Creek’s historical figures are thoughtfully and accurately represented—no small feat given their number. Ada and J.R.R. Riddle, another fictional character who is a member of one of the rescue parties—are wonderfully imagined. They’re both wounded beings, individuals who have suffered great and transformative loss. Yet neither has lost the capacity to change, to hope, or explore the possibilities of the future. If I were traveling through unknown terrain to an equally unknown destination, I would be grateful for the resourcefulness as well as the companionship of such remarkable souls.