THE SOCIETY REVIEWS: Kate Saunders' THE MYSTERY OF THE SORROWFUL MAIDEN 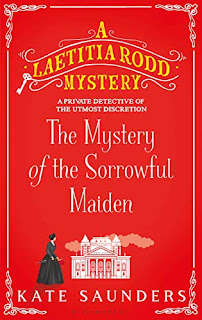 Available on August 19 in the UK and December 7 in the US, Kate Saunders’ excellent third mystery, The Mystery of the Sorrowful Maiden, brings clergyman’s widow Laetitia Rodd into the dramatic and, in 1853, still somewhat disreputable world of the theater. Actor and theatrical troupe manager Tom Transome has left his wife Sarah, once his leading lady, for the much younger Constance Noonan. Mrs. Rodd, a “private detective of the utmost discretion,” is reluctant at first, but when a neighbor asks her to help Sarah advocate for a proper financial settlement, her warm heart makes it impossible to say no. The negotiation is still underway when a corpse is discovered under the stage of Transome’s old theater, which suffered a fire ten years earlier but is now being rebuilt. When the dead man, actor Frank Fitzwarren, disappeared the night of the fire, those who knew him assumed that he had vanished voluntarily. Instead, he was shot in the back of the head. Enraged at their daughter Maria’s romance with Fitzwilliam for secret reasons of their own, both Tom and Sarah had a motive to want him dead—and that’s only one of the myriad conflicts that fracture the family and offer motives for murder. Mrs. Rodd and her sometime investigative colleague Inspector Blackbeard cope with drama in every sense of the word as they attempt to solve Fitzwilliam’s killing as well as the fresh crimes that spring from it.

Saunders’ mystery plot necessarily involves extreme situations, which are grounded by the novel’s sensible voice and solid research. The widowed Mrs. Rodd, its first-person narrator, is a fun and indeed welcome departure from the myriad younger sleuths that tend to populate historical mysteries; even when an assignment brings her into an unfamiliar milieu, as is the case in The Mystery of the Sorrowful Maiden, her common sense and long experience of human foibles stand her in good stead. (Her worldly and irreverent barrister brother Fred is a delightfully ebullient foil.) Saunders’ depiction of the changing world of 1853 Britain is equally well-drawn. The details throughout are deftly chosen, evoking neighborhoods, fashions, and behaviors that are all being transformed as well as events—such as theater fires—that are all too historically accurate. Broader themes, too, are convincingly rendered. The Transomes, for example, suggest the more exaggerated, boisterous theatrical norms that were beginning to pass away at the time, while their arch-rivals the Bettertons represent the more naturalistic, analytical approach that is beginning to earn actors legitimacy as serious (and socially acceptable) creative artists. This shift and others like it inform The Mystery of the Sorrowful Maiden, making it a convincing glimpse of a fascinating era as well as a lively and colorful read.
Email ThisBlogThis!Share to TwitterShare to FacebookShare to Pinterest
Newer Post Older Post Home