So19 Reviews: CLARA McKENNA'S MURDER AT THE MAJESTIC HOTEL 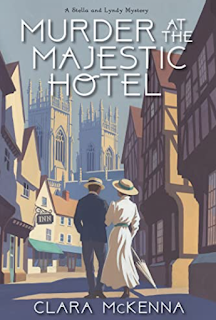 Clara McKenna's fourth Stella and Lyndy mystery appears this week from Kensington, and true to the series generally it's lively, well-plotted, and full of vivid period detail. This installment opens a day after the autumn 1905 wedding of the American heiress and British peer, who arrive at York's luxurious Majestic Hotel expecting a leisurely visit. To their consternation, the honeymoon suite they booked weeks before is occupied by confectionary king Horace Wingrove, who has persuaded his way into the booking with a sentimental story, a box of chocolates and a bribe. The newlyweds settle  into the Royal Suite across the hall only to be awakened the next morning by the shrieks of the chambermaid who has just discovered Wingrove's strangely ruddy corpse. The ins and outs of the Majestic's heating system, the disappearance of the recipe for Wingrove's most popular chocolate, and a ceremonial visit to York by one of Queen Victoria's granddaughters all factor into the mystery, which is further complicated by some of the couple's quirky relations. Yorkshire's historic appeal is well depicted, but the new technologies such as telephones and electric lights are also given their due; Wingrove's business and products are inspired by the era's real Yorkshire-based confectionary companies, while a dangerous plot targeting Princess Ena reflects real threats to royalty, including Ena herself, during the period. Enriched by these turn-of-the-century issues, Murder at the Majestic Hotel is a fun cozy read for those chilly fall nights...but do make sure you have plenty of good chocolate at your side before you begin to read. You can buy the book on Bookshop, Amazon, and your local bookstore and find out more about Clara on her website, Facebook page, and Instagram.