So19 Interviews: JENNIFER KINCHELOE on THE BODY IN GRIFFITH PARK 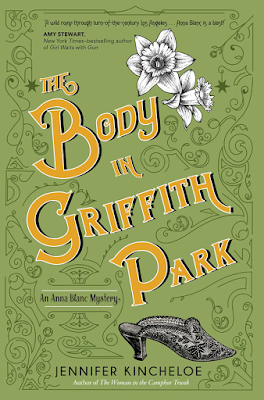 I fell in love with Jennifer's sharp comic prose on the first line of her first book, The Secret Life of Anna Blanc. I was fortunate enough to be assigned her second Anna Blanc mystery, The Body in the Camphor Trunk, to review for Publishers Weekly, and then again to review her third, The Body in Griffith Park, for the magazine. To find out more, visit Jennifer's website; it has lots of fun content, and if you sign up for her email list, you can download additional goodies including some of the public-domain books—a coroner’s manual, a cookbook, mystery novels, books by humorists—that inform the novels and their storylines. Her extraordinary Pinterest is loaded thousands and thousands of period photographs related to series' era, locations, fashions and more. You can follow her on Facebook, Twitter, and Instagram as well. And of course, we encourage you to buy her books, which can be ordered on Amazon, Audible, and through your local bookstore.


Your “day job” is in the field of research science. When did you realize you wanted to be a writer as well? How do you juggle the demands of these two very different professional worlds?

I am stupidly busy, and my house is a wreck. If you work, write, and have kids, something has got to give. If I don’t make my bed, no real harm is done. So I prioritize family and writing.

For years, I was on the research faculty at UCLA doing health policy studies. It wasn’t until my 40s that I even thought about writing fiction. In fact, I remember telling my husband, “I can write non-fiction, but I could never make up a story.” But once I started writing fiction, I couldn’t stop. Of course, I was terrible at first. I had to put in my hours reading books on creative writing and practicing.

More recently, I’ve switched to criminal justice research. (My office is inside the secure area of a jail.) Inmates are almost all trauma victims. They are often mentally ill and homeless. Most have traumatic brain injuries. Substance abuse is rampant. They are poor, disproportionately of color, and of low educational attainment. Now they are vulnerable to COVID-19 as more inmates test positive.

Seeing them and working with their data informs my novels, since my protagonist, Anna Blanc, works in a jail.

Who and what inspired the character of your protagonist, Anna Blanc? Did she find her “seed” in a single historical figure, several different sources, or just your own imagination?

The series is set in Los Angeles in the first decade of the twentieth century. What made you choose that place? What kinds of opportunities—for atmosphere, story tensions, plotlines—does it offer you?

It was the early days of women in law enforcement, and LA was a leader in that. I’m fascinated by what it would have been like to be a woman amidst 200 male cops. These matrons worked day and night, often sleeping at Central Station, interviewing women suspects and victims, and caring for the women in the jail. They did everything from helping the police surgeon with amputations, to preventing sexual abuse, to giving parenting advice. The sexism they faced must have been overwhelming. But these women carved a place for themselves, setting up the first juvenile crime prevention program in the world. They were recognized by Scotland Yard.

This installment takes place in 1908. For me, that first decade of the twentieth century is such an interesting transitional time, existing as it does between the high Victorian ethos of the Gilded Age and the rebellious modernity of the flapper era. Why did you choose to set the series at that particular point in time? Is there something in particular that makes it especially interesting as a moment through which your characters move?

I knew absolutely nothing about the Progressive Era when I started writing The Secret Life of Anna Blanc.  The time period is underrepresented in film and novels. I chose it because it was the beginning of women in law enforcement. And so many things were happening, a lot of them driven by women. Women’s clubs championed women in law enforcement, political reform, child labor laws, suffrage, the 40-hour work week, temperance, finding economic solutions to prostitution, all kinds of things. I spent more time researching than writing the book.

I love the contrast between the dourly practical dress and manners expected of police matrons and Anna’s effervescently frivolous, feminine and fashionable style. Could you talk a little about Anna’s style and fashion? I know you’ve collected a myriad period photographs. Is it from those that you build her wardrobe and approach to personal style?

Yes! In the 1900s, wealthy Angelenos flaunted their wealth with expensive clothes and opulent jewelry. One Frederick Worth dress cost $10,000, and a woman would only wear it once or twice. Jewelry designers like Tiffany, Cartier, and Lalique created drool-worthy pieces in the Art Nouveau style. Every dress that Anna wears in the books is based on a photograph of an actual gown from the era. Her jewelry, underwear, hats, and hairstyles came from pictures, too.

Because Anna’s primary role in society was to look beautiful, it stands to reason that fashion would be important to her. In the beginning of the series, much of her identity is tied up in how she looks. That changes over the course of the series.

I enjoy everything about the series, but perhaps my favorite element is its wonderful comic voice. It’s fast, it’s clever, it crackles with energy, and it often makes me laugh out loud. Was that something built into the series from the start or something you developed as you drafted the first book? Is it a voice that comes naturally to you?

It just pops out. I doubt I could write a book without humor. I wouldn’t know how to approach it.

I don’t want to spoil the story’s mysteries for readers, but I wonder if you can tell us a bit about the third Anna Blanc novel, The Body in Griffith Park.

It’s based on a real white slavery ring that happened in Los Angeles at the Jonquil Apartments, Café, and Resort. A police matron was involved in a shocking way. But I can’t tell you details without spoiling it. Once you’ve finished the book, look it up in the Los Angeles Herald—you can use this link.

Could you give us a glimpse of your writing process? When and where do you write?

I wrote The Body in Griffith Park argely on my lunch hour. I start by reading the Los Angeles newspapers from the 1900s to generate story ideas. I often use a screenplay structure to outline the plot. Then, I write. Sometimes it’s painful, especially getting the first draft down. But I love rewriting.

What’s next for you and Anna?

I’m currently writing book four in the Anna Blanc mystery series. A mummified body is found bricked up in an old fireplace. Of course, Anna and Joe Singer are on the case. It involves a fraternal order and Joe chasing a greased pig in his underwear.