So19 interviews KATHARINE SCHELLMAN on THE BODY IN THE GARDEN 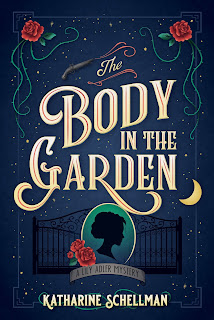 I'm pleased to introduce Katharine Schellman, whose debut historical mystery novel appeared yesterday from Crooked Lane Books, to Society Nineteen readers today. The Body in the Garden finds recent widow Lily Adler moving to London and trying to reinvent her life; when the murdered corpse of a young man turns up in a friend's garden during a society ball, she finds a surprising new purpose. In addition to an absorbing mystery, Katharine delivers a rich, nuanced look at life in 1815 London. Find out more about the author on her website, sign up on the site to read a free Lily Adler short mystery, see her featured on BookPage, follow her on Facebook, and of course, buy the book on Amazon, through your local independent bookstore, or the other venue of your choice. Many thanks to Katharine for speaking with So19!


Like my own, your professional life has been a varied one. Could you talk a little about your background and how you came to write a historical mystery?

I’m a former actor, a trained dancer, and a one-time political consultant. But I always wanted to be a writer: I think the first time I told my parents I was going to write books one day I was six years old!

I didn't necessarily expect to write a historical mystery, though. All my "novels in a drawer" (and there are several on my hard drive that will never see the light of day again) are in other genres. Before I started writing the book that eventually became The Body in the Garden, it wasn't a genre I had ever pictured myself writing in, even though it was one I loved reading. I generally start with characters, rather than plot. So for a while, I had these people in my head, and I wasn't sure what would bring them together in this setting. When I finally realized it was a dead body, everything just clicked: " Oh, that's what they're doing here!"


What about the Regency period, more specifically 1815, made it your choice for the novel’s time period—what possibilities for plots and tensions did it raise, for example?

I love the Regency era. It's one of those periods in history that everyone thinks of as very glamorous and dignified and beautiful. And it was those things—on the surface. Underneath, there was so much tension due to changing social structures, working conditions for the lower classes, the beginning of industrialization, migration towards cities, the growth of the British Empire, various wars around the world... There was a lot more going on than you usually see popping up in a BBC costume drama! It definitely gives you a lot to play around with as a writer.

And, as someone who grew up reading Jane Austen, I fully admit I also enjoy the more well-known elegant and charming characteristics of the era. Trying to balance those two made it such a fun time period to write in.

Your protagonist, Lily Adler, is a widow trying to re-imagine and re-invent her life. What inspired her and her situation? How do you think it resonates for—and/or differs from—the experience of a woman in similar circumstances today?

Lily lives in an era where being widowed granted women a lot of social and financial freedom that they wouldn't have otherwise had, which is a perfect situation for a sleuth to be in. But for her, it came at the cost of losing someone she loved deeply. She's trying to find out what comes next for her, and she (almost literally) stumbles over the answer to that question when a stranger is found murdered at her friend's home.

Lily was an interesting character to write because her circumstances require a certain suspension of disbelief. The average person struggling with grief doesn't find purpose again by solving a murder! But she's also someone standing at a big crossroads: the life she had planned on fell apart, and now she has to create a new one and isn't sure how. And while she's figuring that out, she also has to navigate the social pressure to behave and appear a certain way as well. I think that feeling is something a lot of people, and especially women, can relate to, no matter the specific circumstances of their lives.

Both mysteries and romance novels tend to portray Regency England as being pretty exclusively white. In fact, as your book suggests (most notably but not exclusively in the character of West Indian heiress Ofelia Oswald) the global reach of the British Empire made London a crossroads for people of many nationalities and ethnicities, including mixed ones. Could you tell readers a bit about this aspect of the novel?

Crossroads is such a great word for it! London was a hub of the Empire. Out in the country, there might be less variety. But in a port city, it absolutely makes sense that you'd see all sorts of people.

Though people of color could and did live solidly middle-class lives, it would have been more difficult for them to become part of the upper class. However, there were children of mixed racial heritage born in England in the eighteenth and nineteenth centuries, and many of them went on to become members of the middle and sometimes even upper classes. That's why Ofelia and Captain Jack Hartley are both mixed-race, and their English families facilitate their entry into Mayfair society.
On a related note, one of the inspirations for Ofelia was Miss Lambe in Jane Austen's unfinished novel Sanditon. When I started writing this book, almost no one had heard of Sanditon or knew that Jane Austen wrote about a mixed-race woman. Fast forward five years, though, and there's been a TV series based on it. Now it seems like everyone knows!

The sleuthing in the novel is of course shaped in part by the investigation, policing and criminal justice systems of the time. What did you find most interesting and/or surprising about those? Did those norms make it easier or harder (or both) to craft a satisfying mystery?

I originally didn't plan to have any police force in the novel because I didn't want to deal with researching that aspect of it. But of course, the Bow Street Runners were fascinating, so I couldn't resist for long. They were a fixture of London society for such a relatively short period of time before they were replaced by the Metropolitan Police Force. And the way they interacted with the upper classes, who were used to their wealth and status providing a certain level of immunity, informed a huge part of the plot.

One of the more interesting tidbits about the Runners is that after 1815, they were frequently sent to help prosecutors outside London. So there's a good chance that will impact a future Lily Adler story.

What sort of research did you need to do to write the book?

I had to research everything, from checking maps for the names of landmarks to reading letters for a sense of colloquial speech to studying fashion plates. I even ended up going through records to find the name of the actual magistrate who would have taken the bribe at the beginning of the book. (And then I apologized to him in my author's note for making him so shady. I'm sure he was perfectly nice in real life!)

In the end, only about 30% of that research actually made it onto the page, but it informed everything I wrote.

I think it's important to note, though, that the book is still fiction. My goal isn't to write a history book but to tell a good story. So there are certainly moments where I’ve made the decision not to worry about historical details! They just might not be where readers expect.

What’s next for you and Mrs. Adler?

Right now I'm working on a second Lily Adler mystery, which is currently planned to take place in London shortly after the end of the first book. There will be a few familiar faces and lots of new ones. (Though sadly, there will be fewer balls, since it's the wrong season for them.) Readers will also get a chance to meet Lily's father, who is frequently mentioned but never appears in the first book. His appearance is quite the challenge for my independent sleuth—almost as much of a challenge as solving a murder.